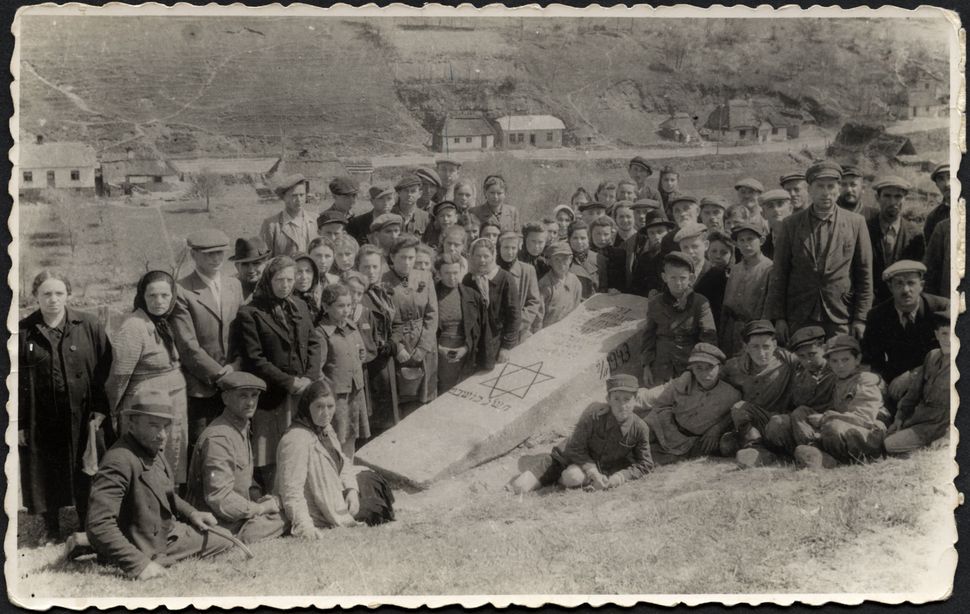 Anatomy of a Genocide, by Omer Bartov Image by Courtesy of Simon & Schuster

ANATOMY OF A GENOCIDE: THE LIFE AND DEATH OF A TOWN CALLED BUCZACZ
By Omer Bartov
Simon & Schuster, 416 pages, $30

In researching the Ukrainian town of Buczacz, Omer Bartov wanted to uncover his own family history. But only a few traces of that history remained. What “Anatomy of a Genocide” provides instead is perhaps more valuable: A searing portrait of how the Holocaust worked on the ground for ordinary men and women — onetime neighbors and friends whose disparate fates were determined by ethnicity and chance.

The book’s epigraph is a powerful quotation from Nobel laureate Shumel Yosef Agnon’s “The City Whole” (1973), based on Buczacz. At one point, its narrator closes his eyes “so that I would not see the deaths of my brothers” — but also to imagine the city and its inhabitants as they once were.

Bartov, Brown University’s John P. Birkelund Distinguished Professor of European History, keeps his eyes wide open. He draws on archival sources, as well as his own interviews with survivors and witnesses, to describe not just mass murder, but rescue, resistance, collaboration and escape — all the ways in which individuals confronted calamity. The result, while factual, is also imaginatively compelling.

Buczacz lies within what Yale University historian Timothy Snyder has called “the bloodlands” — the vast territory in Eastern Europe and the former Soviet Union where the “Holocaust by bullets” preceded and paralleled the establishment of death camps. Mass murder took place within view, and often with the complicity, of the Jews’ Ukrainian and Polish neighbors. Many Ukrainians, in particular, were profoundly anti-Semitic and became indispensable cogs in the Nazi killing machine.

The Israeli-born Bartov — whose relatives in Buczacz all died in the Holocaust — remembers asking his mother to share her childhood memories. One of the lucky ones, she had immigrated to Palestine from Buczacz, then part of Poland, in 1935. After her death, Bartov traversed three continents and nine countries to learn more of his family’s story. He found only a note about his maternal grandfather’s request to enter Palestine and information on the ship that had transported his mother and her family from Europe.

So Bartov turned his focus to illuminating centuries of life in Buczacz, with its “constant interaction between different religious and ethnic communities,” primarily Ukrainians, Poles and Jews. That very interaction, he writes, made the eventual genocide “a communal event both cruel and intimate, filled with gratuitous violence and betrayal as well as flashes of altruism and kindness.”

Over the years, the town had experienced alternating cycles of peace and internecine violence, as well as the horrors of war and occupation. Eyewitness accounts of 17th century attacks by Cossacks on Jewish communities describe particularly brutal acts. The underlying question posed, but never entirely answered here, is whether the Holocaust represented the culmination of long-simmering tensions, or something radically different.

In the late 18th-century, Buczacz became part of Eastern Galicia, ruled by the Austro-Hungarian Empire. Emancipation, in the 19th century, lifted restrictions on residence and occupation, allowing Jews to become farmers and fostering anti-Semitic tensions in the countryside. In the early 20th century, alongside Zionism, Polish nationalism was a rising, and ultimately successful, force.

During World War I, Buczacz was “repeatedly conquered and occupied by one side or another, devastated by fighting, looting, wanton destruction and ferocious violence.” The history, in Bartov’s telling, is complex, bloody and hard to follow.

One theme, however, emerges clearly: When Poles and Ukrainians battled, Jews — who, as of 1921, made up a slight majority of the town’s population — tended to be scapegoated by both sides. Interethnic hostilities ran high in the years preceding World War II, when Buczacz was part of Poland, and were exacerbated by Soviet occupation early in World War II. “The intimacy of friendships…was now transformed into an intimacy of violence,” Bartov writes.

“Anatomy of a Genocide” hits its stride in Bartov’s recounting of the fate of the Jews after the 1941 German takeover. The killings began shortly thereafter, aided by Ukrainian policemen who often knew their victims. One Nazi leader shot Jewish teenagers begging for their lives, while simultaneously holding the hand of his five-year-old son. Murder was routinized, and served as “background noise to drinking bouts or amorous relationships.” Meanwhile, German civilian families employed Jewish slave labor, making their “tidy German homes…an island of normality floating on an ocean of blood….”

Bartov writes with some sympathy of the dilemmas faced by Jewish leaders trying to meet escalating German demands in the name of community (and self) preservation. While emphasizing first-person accounts, Bartov notes how self-serving and distorted they can be; accused killers routinely lied at postwar trials, while some rescuers exaggerated their roles.

As both Buczacz’s occupiers and natives turned on the Jews, there were “exceptions to the mayhem and murder.” Relying on the kindness of both friends and strangers, some Jews hid; others fought back; a few children were successfully placed with Christian families. “I am writing you the last letter of my life,” a father, about to surrender, writes to his surviving children. “I have only suffered in the hope that I would perhaps still see you, but sadly I have no more strength.”

Some neighbors “made survival possible at enormous risk to themselves,” while others looked away, profited financially, or even joined in the killing. At times the line between rescue and abuse could blur, as Jews traded money, possessions, even sex for life. Yet as one survivor, Zev Anderman, saved by two Ukrainian brothers, later said: “Among the Christians, Poles and Ukrainians, there were also human beings. We and history must not forget that.” Amidst the unsparing catalogue of atrocities, Bartov allows a glimmer of hope.

Julia M. Klein, the Forward’s contributing book critic, was a finalist for the National Book Critics Circle’s Nona Balakian Citation for Excellence in Reviewing. Follow her on Twitter @JuliaMKlein