Why Vowels Matter So Much At The Passover Seder — Really! 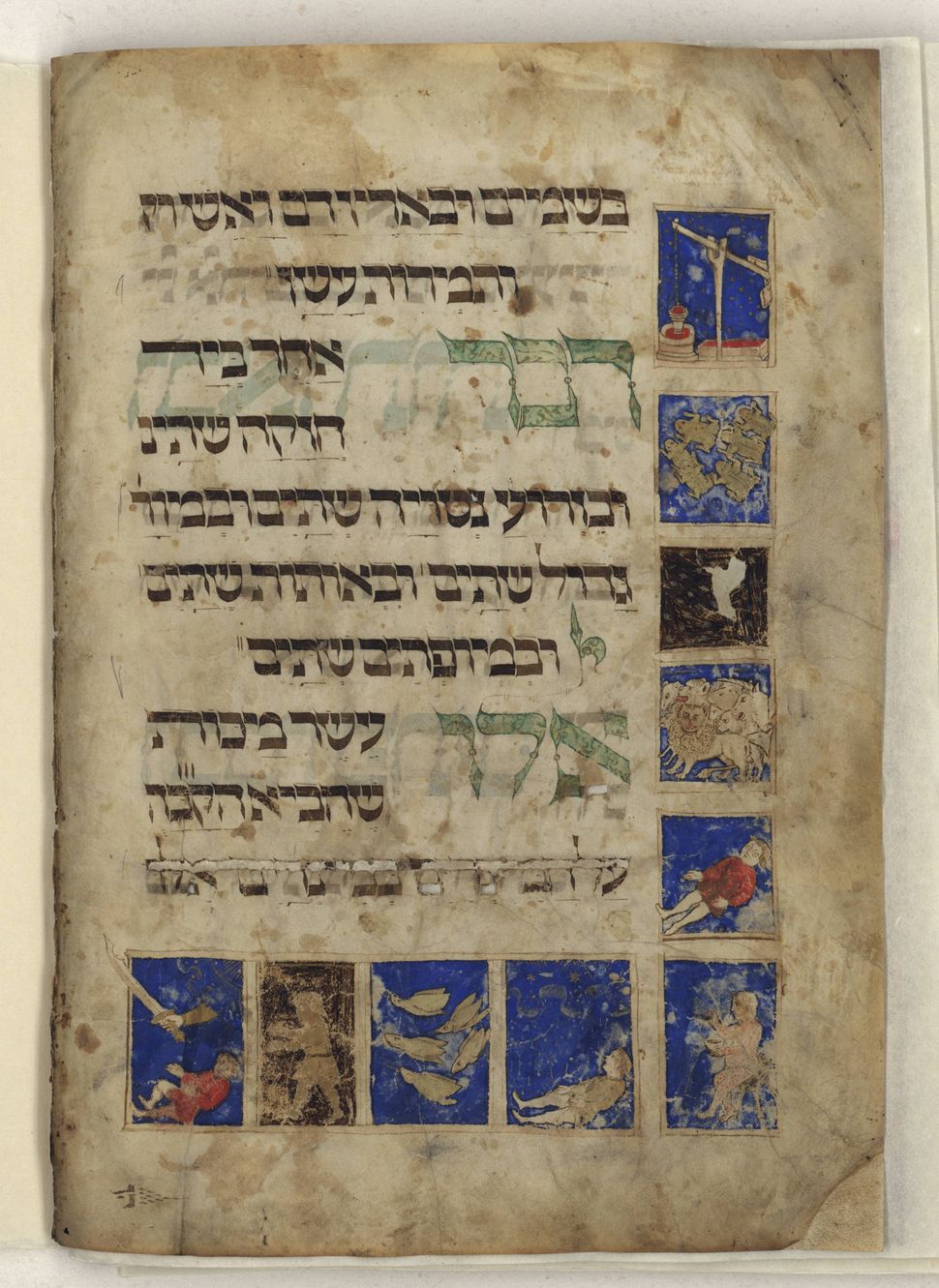 The Rothschild Haggadah Image by National Library of Israel

Some Seders focus on the plot of the Haggadah — the hunger-fueled journey to Egypt, the 400 years of ensuing enslavement, the long and brutal struggle against Pharaoh’s cruelty and, at last, the triumphant Exodus. But in families like mine, the main event is not plot, it’s the vowels. Dinner is postponed indefinitely as relatives argue over zo or zu, which comes down to one dot above or inside the letter vav.

Haggadot are brought in as ammunition, and each attendee must read whatever it says in the disputed line, word or syllable. The Haggadot come from around the world. Some are ornate and illustrated, some are packed with tiny-lettered commentary and others feature only the lone voice of the text. But no matter what one’s Haggadah looks like, everyone at the table realizes that a dot inside a letter or, God forbid, a missing dot, can mean an extra hour of stomach growling.

“The main issue is that zu is incorrect as a demonstrative pronoun, it is a relative pronoun meaning ‘that,’” my mother explained when I asked her for a brief explanation of why the appearance of zu in the wrong place matters so much.

But maybe the vowel wars and, by extension, the grammar wars — and, more broadly, the war between plot and how to understand it — are what Passover is all about.

The battle between plot and order is contained in the familiar Hebrew words haggadah and seder, which define the Passover experience. The word haggadah can be understood from the infinitive l’hagid, or “to tell.” The famous verse from Exodus exhorts us: “V’higadita le’veencha bayom hahu,” or “And you shall tell your son on that day” about the story of slavery and redemption. So haggadah is “let me tell you the story” — and means “narrative.”

My mother tells me that looking to the infinitive to explain a Hebrew word is an English speaker’s way of understanding Hebrew. She reminds me to focus on three-letter roots —the building blocks of Semitic languages.

Here, the root of the word haggadah is nun, gimel, daled or neged — the latter two meaning “opposite” or “against.”

The Even Shoshan Dictionary confirms my mother’s approach; neged is indeed mentioned in the entry for the root of haggadah, along with a definition of “saying” and “lecture” — in other words, narrative. In all the noise of the vowel wars, we never got around to something as basic as what the word haggadah means, and what its roots are.

“There are levels of ‘against,’” my mother explained, making the case for neged. “The roots of haggadah and l’hagid represent a milder form of difference, a form of distinction.”

We do some digging, and discover that the Aramaic root nun, gimel, daled means “to lead.” That, perhaps, is another form of “distinction.” A leader is often a leader because he or she sees things differently from everyone else.

At least my mother and I agree on the word seder. It comes from the three-letter root samekh, daled, reish, and the infinitive means “to put in order, to arrange”; so seder means “order” or “arrangement.” As any writer will tell you, it’s not just what happens, but also how you order what happens that majorly affects how you understand what happens. Jewish text can be seen through the lens of this battle between story and order — in other words, narrative and structure. Understanding, in Jewish tradition, is often a mixture of these two elements: the text itself and how to order it. Hebrew grammar and, by extension, the Hebrew language itself can also be seen that way — not just the word, but also how to structure it.

Part of order is pronunciation and vocalization, and part is an exact agreed-upon text, a version of what happened, which is why slight differences create so much controversy.

Variations between Haggadot have been causing arguments — okay, dinner conversations and Seder discussions — for centuries. Sometimes a few extra letters in the text can signify a major change in meaning.

“You” and “us” — obviously a big difference. Many commentators, along with the Haggadah itself, discuss how the evil son removed himself fr om the community by asking how the Exodus affected them — as in them, not us. If the wise son asks the same question as the evil son, well, that’s a conversation topic. And this year, when intelligence and evil seem to be constantly at war, it’s a particularly important discussion.

Throughout other frightening periods in history, many towering Jewish thinkers have been fascinated by differences between Haggadot. Some felt the need to codify their own Haggadah for posterity, vowels and all. For Haggadah connoisseurs — okay, Haggadah obsessives — the Haggadah Shelema, by Menachem Mendel Kasher and edited by Shmuel ben Baruch Ashkenazi, published in 1955, is an essential book. It collects the Haggadah versions, commentaries and discussion of various lines of a dizzying list of giants, including Saadia Gaon, the genius who translated the Torah into Arabic in the 10th century, and Maimonides, author of “The Guide for the Perplexed.” And yes, both Gaon and Maimonides had their own personal Haggadah versions. Among the Haggadah Shlomo’s treasures is an Arabic commentary on the Haggadah, translated into Hebrew.

Textually, the Haggadah is an “open narrative”: Its contents can be incremented, and new generations and Jewish groups have been adding to it, pursuing both tradition and experimentation. Visually, the Haggadah often presents itself as an illustrated book, and the illustrations reflect a wide variety of aesthetic approaches, representational needs, and cultural and political agendas.

In my Seder-attending experience, it’s not just what is added, but also what is omitted that makes the Haggadah interesting. For example, there is a passage in the Haggadah from Ezekiel 16:6-8 that is a bit more explicit than what many parents want to discuss with young children. Each year, my father asks what this passage is doing in the Haggadah — and I remember noticing that in the Haggadah that was used at my elementary school, that passage was not translated into English. For the reader who doesn’t read Hebrew, the untranslated passage in some Haggadot might as well not exist, its role in the narrative and the order of it reduced to nothingness.

That same problem exists in vowel land. One of the problems with explaining vowel obsession to the uninitiated is that a vowel controversy is usually difficult if not impossible to hear in translation, and yet a lone vowel can affect both narrative and the arrangement of it, both haggadah and seder. But that’s the part of Passover that’s eternal — its insistence not only on story and history, but also on understanding it, ordering it until it makes sense, even if it takes all night.

Why Vowels Matter So Much At The Passover Seder — Really!