How Fight Over African Immigrants Is (Literally) Dividing Houses In Israel 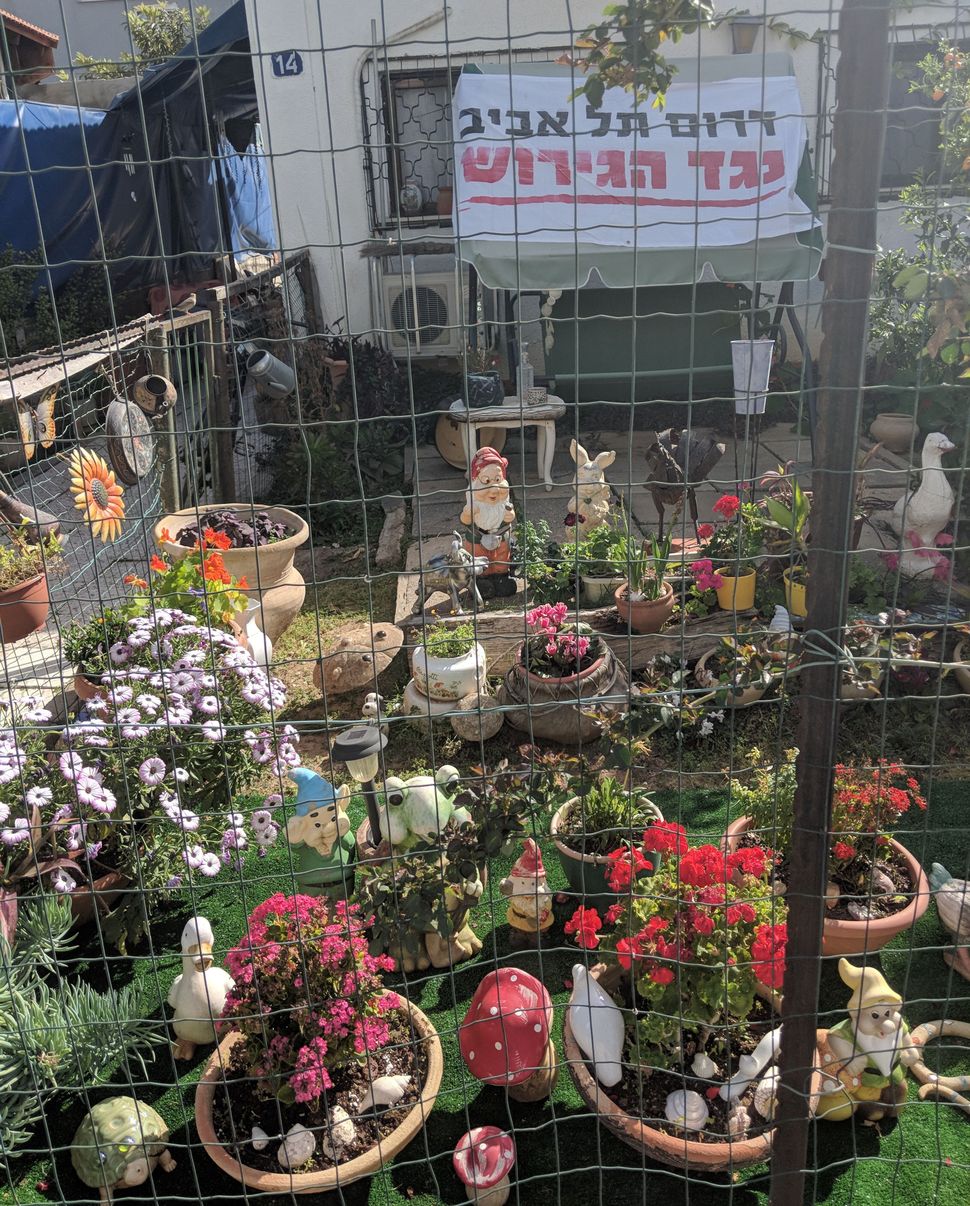 Sign Of The Times: A banner declares “South Tel Aviv Against the Expulsion” Image by Aviya Kushner

The refugee crisis in Israel is personal for many Israelis. In South Tel Aviv’s Shapira neighborhood, where most residents have modest incomes, one house has two signs — half the house calls for letting refugees stay; the other calls for sending them out of Israel.

One sign reads: “South Tel Aviv Is Against the Expulsion.”

Then there are some lemon trees, and the sign the house’s other residents put up. “Rehabilitation Begins with Expulsion of Infiltrators.”

The word mistanenim, or infiltrators, is a far cry from “refugees” or “asylum seekers” or “migrants,” the kinds of terms found in newspaper editorials.

The neighborhood has many African residents, and I watched as a kindergarten class composed entirely of refugee children passed the two signs on a single house. A friend explained to me that lately, neighborhood synagogues have taken to sounding alarms before Shabbat, as if to remind the growing wave of hipsters there for the affordable housing, that this is a Jewish neighborhood, that this is Israel. Surely the refugees living in the area hear these Shabbat alarms too. 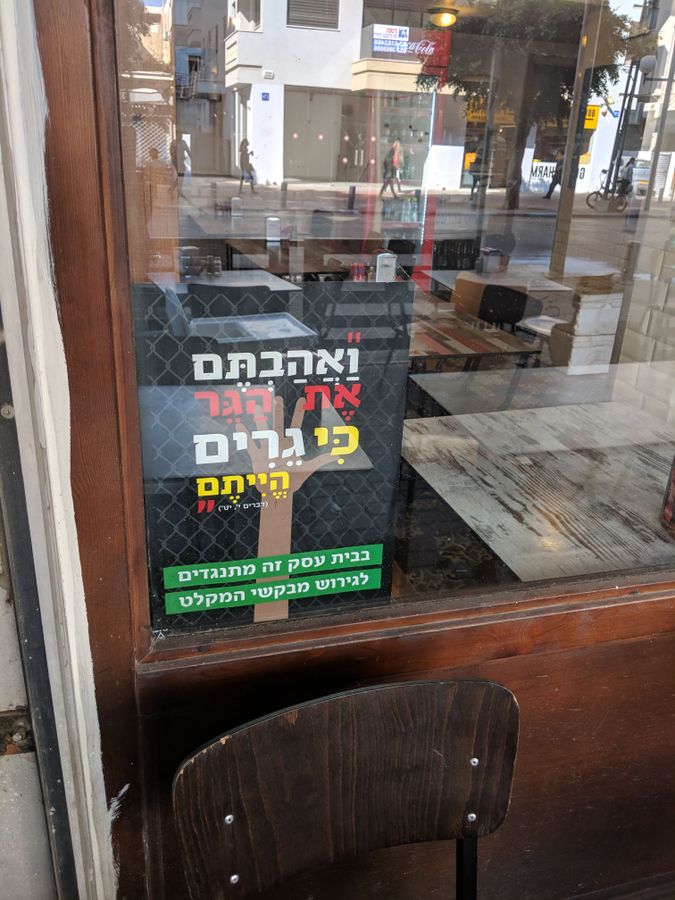 Sign in Tel Aviv Restaurant Window: “Love the stranger for you were strangers.” — Deuteronomy 10:19 Image by Aviya Kushner

I grew up in a neighborhood in New York that sounded sirens eighteen minutes before Shabbat, and I know such sounds are not necessarily sinister or political. But they do make it impossible to not notice that Shabbat is coming. And perhaps they remind a listener that there is a Jewish sense of time.

North Tel Aviv, a twenty-minute bus ride away, is quieter and more expensive, and refugees generally don’t live there. But there are plenty of signs in the area supporting refugees. In recent weeks, signs popped up in restaurant windows stating that refugees were welcome and quoting Biblical passages, and Deuteronomy 10:19 in particular, on welcoming the stranger. Many restaurants hire refugees, and I watched as a young African man bussing tables looked at the signs. 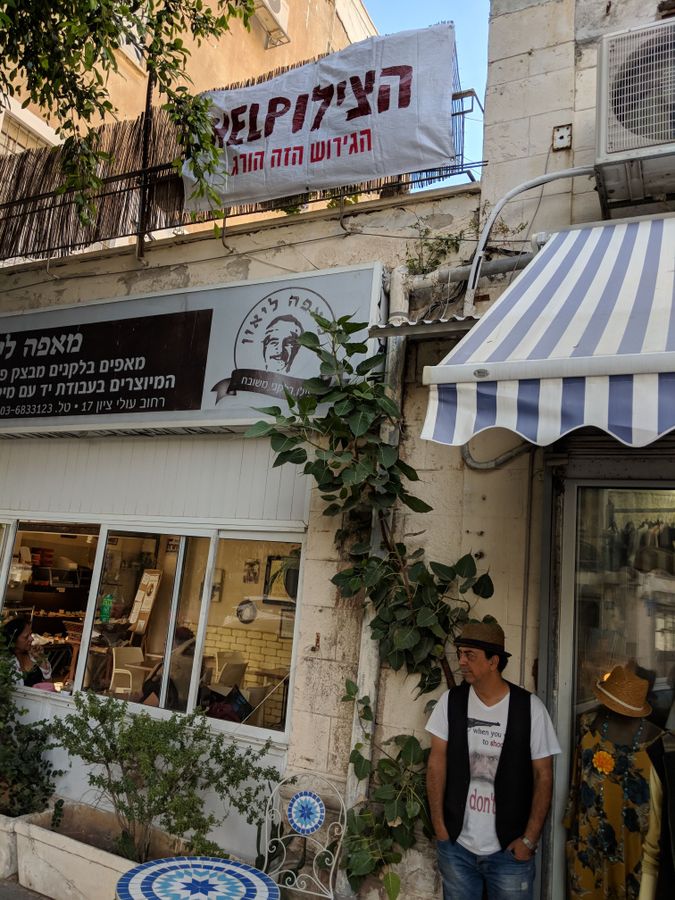 To newspaper readers around the world, this issue may seem like a question decided by government officials and the United Nations. But on the ground, in Tel Aviv and its surroundings, it’s personal, Biblical, historical.

Many here were refugees themselves, or had parents or grandparents who fled for their lives. Israel’s ability to remain Israel is a key concern for those on both sides of the issue, which sometimes splits two sides of the same house.

How Fight Over African Immigrants Is (Literally) Dividing Houses In Israel