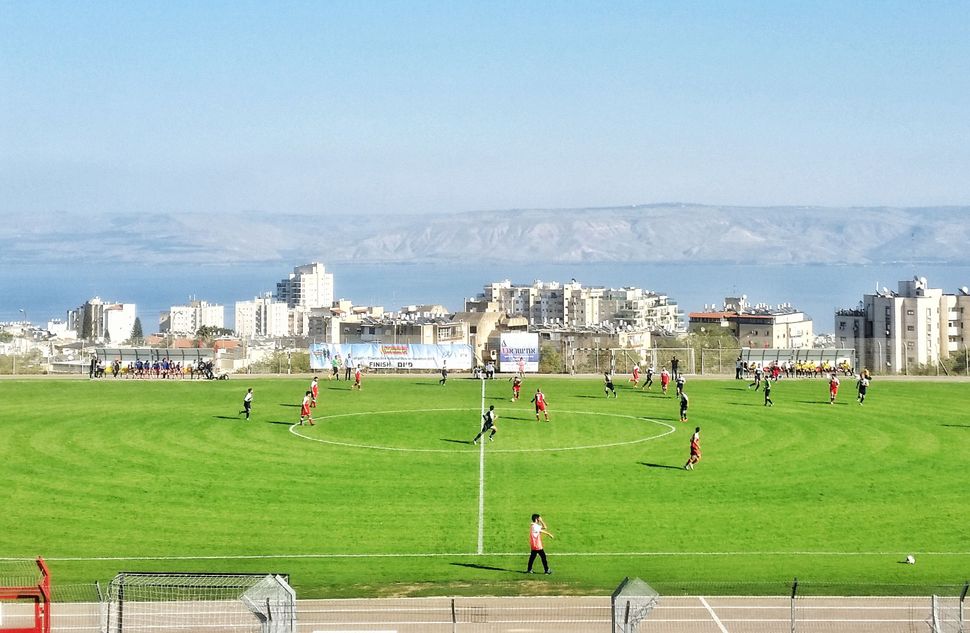 Mistake by the Lake: Israelis mock people from Tiberias, by the Sea of Galilee, for being slow. Here, the soccer players of Ironi Tiberias F.C. (blue) prove their speed. Image by Osher Ankonina

Who cares about Lionel Messi?

Well, actually, soccer fans and players of the video game “Football Manager” do care, passionately, about the world’s greatest living soccer player, but the beauty of soccer does not come from millionaire celebrities on manicured pitches. It comes from billions of people kicking balls of all sizes on floors of all textures using all their heart, soul and might.

And it’s that compulsion that Gad Salner, Vadim Tarasov and Doron Shahino have plumbed with their oddball lo-fi soccer-related project — “Kaduregel Shefel.” 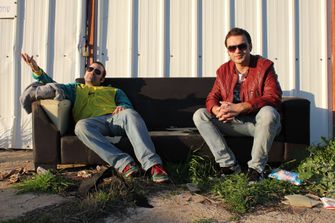 Roughly translated as “Lower Football” (shefel is the word for “low” in the Hebrew phrase for “low tide”; Kaduregel means “soccer”), “Kaduregel Shefel” is an eclectic celebration of the bizarre and beautiful complexities of soccer culture away from the celebrity game.

Describing “Kaduregel Shefel” is not easy; basically, it refers to whatever comes out of the love that software engineers Salner and Tarasov have for the culture that has formed around obscure aspects of soccer — those teams, players or grounds that have been lost in history, geography or just in the netherworld of leagues of very poor quality. 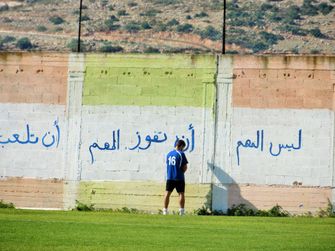 Blessed Relief: Kfar Kana in the Galilee is associated with the Biblical village of Cana, where Jesus turned water into wine. Here, number 16 engineers a reverse miracle on the stadium walls. Image by Courtesy of Kaduregel Shefel

Already with a cult following and a TV series (filmed by Shahino) in Israel, Shefel’s embrace of the lower levels of soccer is gradually conquering the world.

As well as the “fun-umentary” TV series, the project has manifested itself variously as a series of photos, of custom-created soccer-related objects and as an exhibition that was surprisingly successful in Tel Aviv before traveling across Europe. 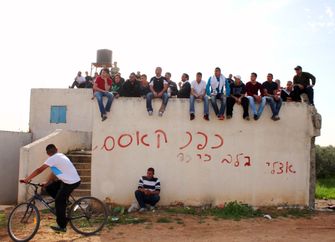 Hope not Abandoned: Spectators sit on an abandoned building used as an away stand for the Kfar Qassem field, 12 miles east of Tel Aviv. Image by Courtesy of Kaduregel Shefel

The impetus for what might be loosely called a movement came from Salner and Tarasov’s shared fascination for the bizarre teams from the English lower leagues that they came across playing “Football Manager.”

This is how it happened.

Having each played the game for many, many hours, Salner and Tarasov met in the army and bonded in laughter over the exotic absurdity of places with names like Halifax Town or Brentford. Knowing that “Football Manager” used real places and real teams — however unlikely they sounded — the two men wondered what the Israeli equivalent would be and whether they could actually find such a game. 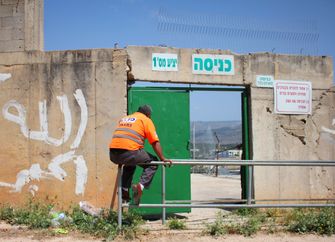 Homebody, Kabul: A worker waits at the entrance to the Kabul municipal stadium, 10 miles southeast of Acre. Image by Courtesy of Kaduregel Shefel

In 2012 they decided to drive to a game together.

The American baseball equivalent would be a Single-A game in Pawtucket, Rhode Island. But in Israel they innocently chose a game in Umm al-Fahm, an Arab town just over the border from the West Bank.

Even trying to find the stadium “was scary,” Salner told me as we sat in the safety of a WeWork café in New York. Although the team played in an Israeli league, no one they met in the town spoke Hebrew. Convincing the (Jewish) Israeli security guard that he should let them into the game because they were just soccer fans and not right-wing extremist provocateurs was a trial itself. 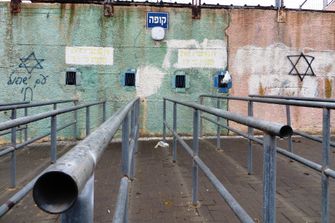 Miles of Aisles: Fans of Maccabi Kabilio Jaffa and Hapoel Kfar Shalem will use these ticket offices of Tel Aviv’s Hatikva Neighborhood Stadium on matchdays. Image by Courtesy of Kaduregel Shefel

Inside the stadium, things were barely better. “It was awkward,” Salner told me. The other spectators couldn’t understand why the two of them had come. “Are you scouts?” they wondered. “Or agents come to watch a player?” Why else would they be there?

In the end someone spoke Russian — apparently he’d learned it studying medicine. Tarasov knew Russian from his parents, and eventually the men’s soccer bona fides were accepted. They were invited to the canteen — “It was different from any other canteen we’d seen, all in Arabic” — and the president of the club even invited them to the dressing room.

It would prove to be the first visit, followed by scores of such trips. Tarasov and Salner kept traveling and taking photos of soccer culture in the hidden corners of Israel, in Arab villages, in Bedouin villages, in outposts of Moroccan Jews in the South and in forgotten villages in the north.

The souvenirs they collected evolved from cell phone photos to videos to a whole TV series. Over the past five years the adventures of the earnest Salner and the dramatic Tarasov (“He always gets bored with the soccer on the pitch” Salner said) have led to a television series, a collaboration with the Israeli Premier League for some promotional videos (“The IPL is normally quite snooty” — Salner again) and a sui generis art exhibition.

That exhibition — originally developed in Tel Aviv but now shown in England, the Netherlands, Greece and Serbia — includes photos; sunflower seeds for visitors to munch on and leave the shells on the floor while viewing the exhibition; cardboard cutouts of minor, albeit cult, players from the 1990s and more.

Kaduregel Shefel Exhibitions (None Yet In America)

Shahino approached them at an early talk to see if they could make a film about Kaduregel Shefel. All three agreed they wanted to avoid cliches and instead of a “documentary,” they inaugurated the “fun-umentary” genre. Fittingly, the second series was funded by the Israeli lottery.

An episode of the TV show has also been shown at each iteration of the exhibition, and Salner is heartened at the shared humanity it illustrates:” Everyone laughs at same place.”

Soccer has more adherents than any religion: More than 3 billion people watched the 2014 World Cup finals, and that is greater than the population of the world’s largest religion (2.5 billion Christians). But too often, believers in the beautiful game get seduced by the glitz and glamour of the highest-paid echelons of the professional game rather than embracing the honest endeavor, the spit and sawdust at the game’s roots.

Shahino, Salner and Tarasov have embraced that endeavor with gusto — visiting unknown teams and, through the brotherhood of soccer, meeting unknown countrymen and hidden neighbors.

Feeling the walls of their de facto segregated lives breaking down, they embarked on a quixotic quest to visit small Israeli soccer grounds and wound up having an anthropological adventure. The question no longer is, “Can we go?” Rather, it’s “Where can we go next?”

“Who comes?” I asked Salner. “Hard core fans of soccer?”

“No,” he said, “friends who don’t love football. Because the football is shit.”

Dan Friedman is the Forward’s executive editor. Contact him at dfriedman@forward.com