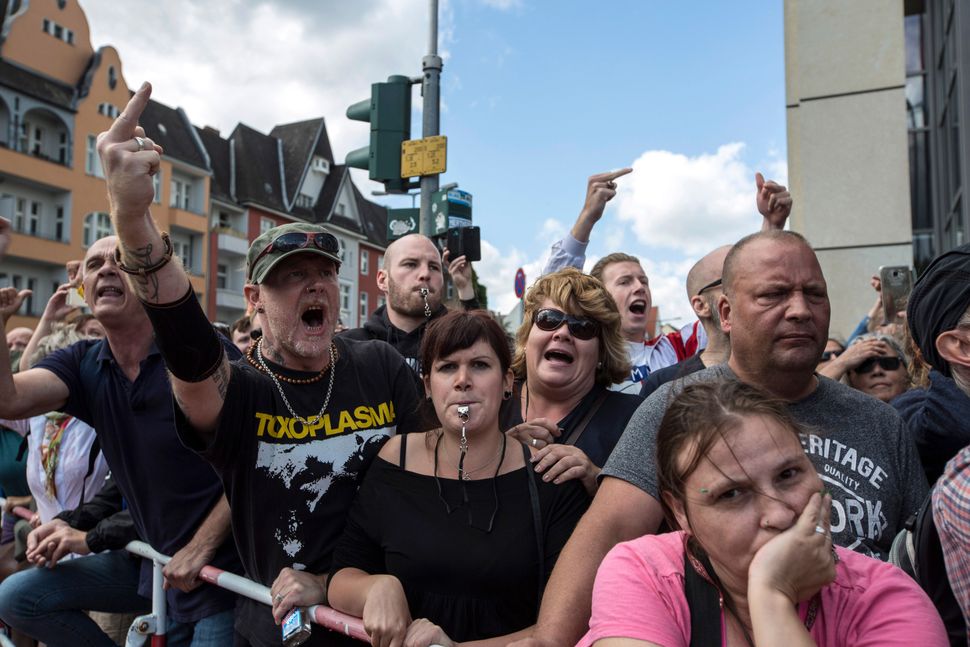 Can bookstores become a powerful force in the fight against neo-Nazis? As far-right parties find success in Germany and across Europe, and xenophobic nationalist groups take to the streets of Berlin, one shop has set the standard as a site of resistance to such movements.

According to an April 9 piece in The New York Times, Berlin’s Tucholsky Bookstore, a neighborhood shop named for a Jewish satirist of the Weimar era, has become the focal point for protesters to Berlin’s frequent neo-Nazi marches.

As The Times’s Sally McGrane writes, Tucholsky Bookstore’s owner, Jörg Braunsdorf, experienced a wake-up call in fall of 2016, when he first witnessed extremists marching through his bookshop’s neighborhood in Berlin’s Jewish quarter. Last spring, as neo-Nazis prepared, once again, to march through the neighborhood, Braunsdorf decided to fight back. As McGrane writes, he “emailed everyone on his bookstore distribution list” and set up a an “after-hours meeting” among the store’s shelves.

Six of that first meeting’s 40-or-so attendees formed an organization they called the Residents’ Initiative for Civil Courage. By last summer, according to McGrane, the group, in conjunction with the city-funded “Berlin Against Nazis” organization, drew “200 to 300 neighbors” to a protest against another neo-Nazi march through the neighborhood.

Tucholsky Bookstore was a surprisingly significant venue for Braunsdorf’s original meeting. Kurt Tucholsky was the Weimar republic’s “most brilliant, prolific and witty cultural journalist,” according to a 2014 article by The New York Times’ William Grimes, which praised new English translations of the author’s works. (Braunsdorf chose the bookstore’s name because it is on Tucholsky Street, which is named for the author). Tucholsky’s writing, according to Grimes, targeted “nationalists, militarists and fat cats”; the author particularly disdained Hitler and his supporters, who he apparently called “little people.” In the 1930s, Nazis burnt Tucholsky’s books and stripped him of his citizenship. He died of an accidental overdose while in exile in Sweden in 1935. Tucholsky Bookstore has a large section devoted to his work.

The Residents’ Initiative and their allies gathered again this past March, to protest another neo-Nazi march through the Jewish quarter. As McGrane reported, the anti-Nazi demonstrators met white supremacists a few blocks from the bookstore, greeting them with chants of “Nazis out,” and blowing “brightly colored whistles.” The marchers disappeared behind a “line of police officers,” and the crowd dispersed.

Afterwards, Braunsdorf told McGrane about his concerns for German society: “I think in the next years we are going to need to not just protest ‘against,’ but really come up with a ‘for,’” he said. “What do we want, in our society?”