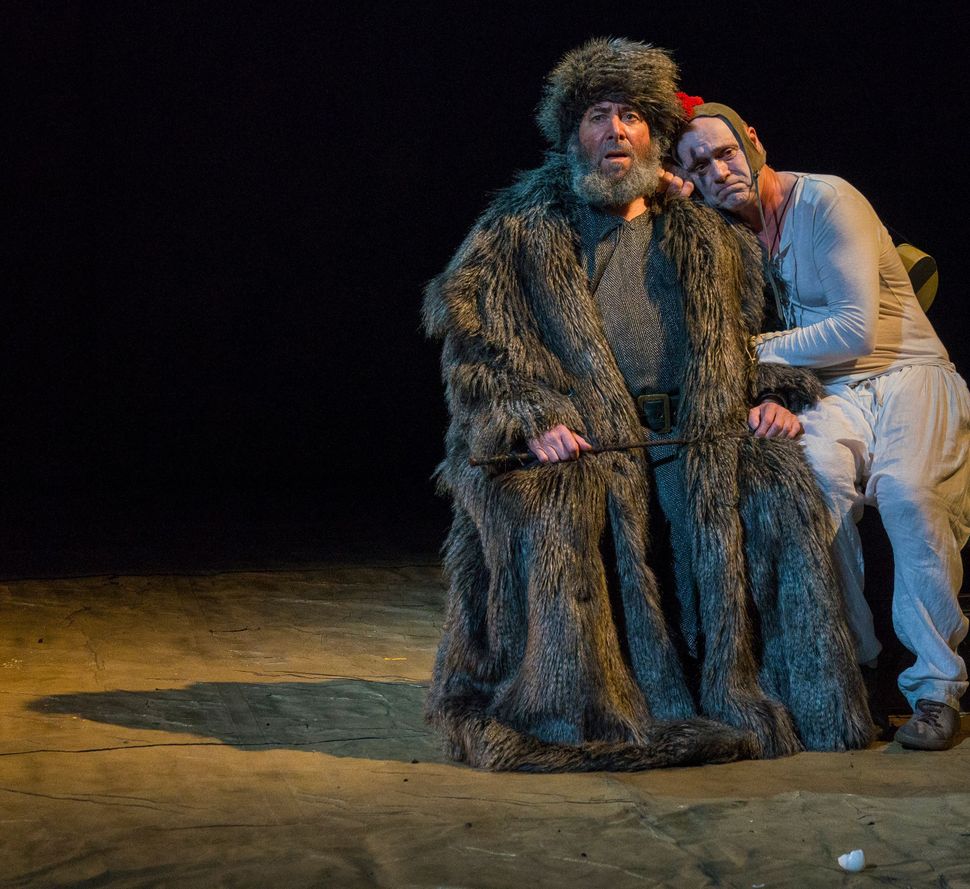 Shakespeare’s “King Lear” has been a different play every time I have read or seen it. It’s a parable about the inevitable abuse of power, a vivisection of the profoundly complex relationships between parents and children, a reflection on the seemingly pre-determined cycles of violence and decay that characterize political society. It is a moral play that is moral-less; there is no neat way to sum up its conclusions.

Playing the titular monarch in a Royal Shakespeare Company production at the Brooklyn Academy of Music through April 29, the U.K.-based South African Jewish actor Sir Antony Sher gives one of the most jarring performances I have ever seen, as his detachment from a reality too painful to process eventually becomes so complete as to be nearly humorous. It’s a choice that Sher makes early. When his Lear explodes in undue fury at his youngest daughter, Cordelia, he does so with a growl so textbook-monarchical that it’s hard to take seriously. Lear is obviously misguided, at the play’s start, but Sher is something else: Hollow, reaching, weirdly funny.

Humor proves a theme in the production, mostly as it clarifies the range of responses the play’s inhabitants have to the state of political peril in which they unexpectedly find themselves. In a global moment of similar precariousness, Shakespeare appears unfailingly modern; his characters will be familiar to anyone who has spent five minutes on Twitter. Paapa Essiedu’s antagonistic Edmund exploits others’ uncertainty with a troll-like indifference, taking a cool-mannered delight in letting the audience in on the joke, until it turns on him. Graham Turner’s Fool and Oliver Johnstone’s Edgar, in disguise as the insane beggar Poor Tom, give manic, grinning warnings about the result of the country’s collective madness. Unlike those around them, they can see forward to their grim jokes’ decidedly unfunny outcomes.

Yet it is only close to the play’s end that the play’s complicated interplays on humor come together. In the final scenes, the audience learns that an order has been given for both Lear and Cordelia’s deaths; the duo have been imprisoned by the armies of Lear’s other daughters, Goneril and Regan. A soldier races offstage to stay the order.

As soon as he does, Sher, offstage, lets out a hollow, arcing moan. It registers as so obviously fake, so distant from a real sound of grief, that on the night I attended the play many in the audience laughed.

A panel lifted, showing Sher seated on a cart, cradling Mimi Ndiweni’s Cordelia in his lap, a pieta. Sher pauses, then makes the same noise again, an attempt at keening as performed by someone who has no idea what keening is, as dissonant and laughable as a medieval painting of a lion by someone who had never seen one. He does it again, and again; he begins to speak, and paws at Ndiweni’s lifeless arm desperately, like a child attempting to liven a doll. Here was grief from a man so lately accustomed to comfort that he had no idea how to show it.

Given Lear’s psychological and physical decline over the course of the play, his ensuing death doesn’t come as a shock. Yet in Sher’s performance, its apparent cause is surprising: Not only grief, but, even more dominantly, confusion over its expression. That suggestion belies the end of “King Lear.” Per its first published edition, produced in 1608, the play’s title refers to three tragedies: That of Lear, his daughters, and Edgar. Yet Edgar, at the play’s end, having survived tragedy, appears poised to lead Lear’s recently-sundered country in its recovery. His tragedy, the play suggests, is over and incomplete. Why is he included in the title’s summation of the play’s sad stories?

Perhaps for this reason: Edgar, after Lear’s death, haltingly attempts to craft a healing philosophy for the country he is going to govern. “The weight of this sad time we must obey;” he begins, “Speak what we feel, not what we ought to say.” Yet as Sher’s take on Lear’s death demonstrates, sometimes the only way to speak what one feels is to say what one ought — if one knows what that is. Edgar, despite his own sequences of grief, has failed to grasp the extremities of feeling experienced by his predecessor, as well as the apparently trite means of their necessary remedy.

Edgar’s tragedy is closest to our own: The inability to fully ingest the many tragedies that ravage the world around us. In April of 2018, as Syria’s government gassed its own citizens; as the civil rights lawyer David Buckel immolated himself in protest of environmental abuses; as the Israeli military killed a journalist on the Gaza border; as the police killings of Stephon Clark and Saheed Vassell repeated a familiar pattern of horror; as a breed of caribou quietly went functionally extinct, “King Lear,” to me, is about the devastating consequences of our human incapacity to process large-scale grief. It’s about our instinct to laugh or sneer or troll or satirize when confronted with tragedies we don’t quite understand. Antony Sher’s vectorless wail will be in my mind for a long time. I can hear it now. The question is: What to do about it?