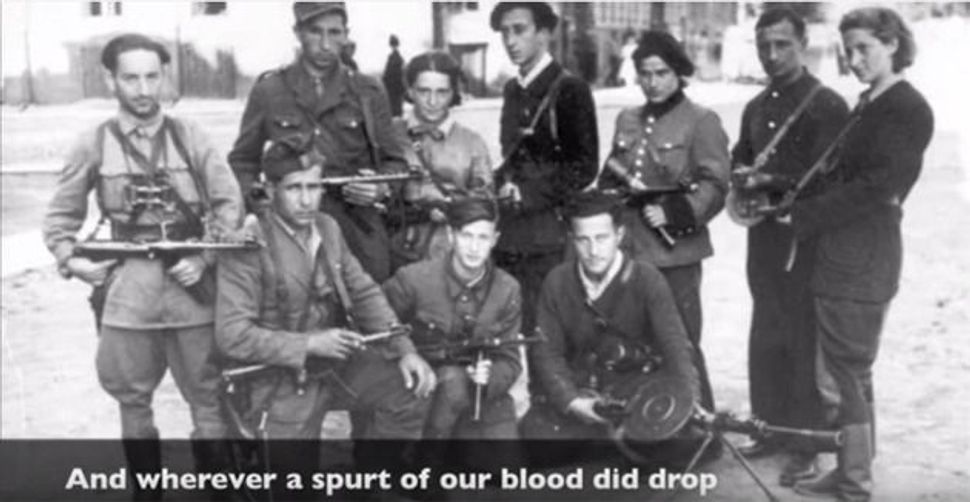 Thursday April 19 marks the 75th anniversary of the beginning of the Warsaw Ghetto Uprising. In remembrance of the occasion, last week I posted a collection of various renditions of Hirsh Glik’s partisan’s song, the “Hymn of the Partisans,” on the Yiddish Forward’s video blog Oyneg Shabes.

Why “Hymn of the Partisans”?

Hirsh Glik, a young poet imprisoned in the Vilna Ghetto, wrote “Hymn of the Partisans” after receiving word of the Warsaw Ghetto Uprising in April 1943. While he was working on the now-iconic song, the fighting in Warsaw was still raging. Glik, just like the ghetto fighters in Warsaw, knew the inevitable result: The uprising would be crushed by the full force of the German army.

The Vilna Ghetto partisans had been planning their own uprising, but instead decided to escape the ghetto and join a Soviet partisan unit in the forests outside of the city. Glik was eventually captured and sent to a labor camp in Estonia. The exact circumstances of his death are lost to history: According to most accounts, he was shot while escaping the camp, where he composed his final songs in late July of 1944.

Some Jewish partisans, however, remembered him having survived that shooting, only to be killed shortly afterwards in an early-August ambush. Either way, by the time of his death at the age of 22, his “Hymn of the Parisans” was already being sung across Nazi-occupied Europe and had, via underground couriers, reached both New York and Moscow. So moving was the song that even today, 75 years later, many Holocaust survivors still recall where and when they first heard it. It was sung in concentration camps, in forests before battles, in hiding spots amidst the rubble of bombed-out cities and during covert partisan funeral services. After the war it became a standard portion of most Holocaust memorial programs around the world.

When I worked at the Yiddish Book Center, I oversaw the digitization of a large treasure trove of audio recordings from the Jewish Public Library of Montreal. I turned one recording from 1959, of Annie Lederhendler singing “Hymn of the Partisans” at a reception for partisan-poet Abraham Sutzkever, into a video tribute to Hirsh Glik and the partisans of Vilna.

“Hymn of the Partisans” has been sung by every major postwar Yiddish singer and translated into dozens of languages. One of the most famous renditions of it was performed by Paul Robeson at a concert in Moscow in 1949.

Robeson also sang a beautiful English translation of the song.

A fascinating, and unjustly forgotten, cover of the song was sung by Molly Picon. Although Picon was known almost exclusively as a comic actress, this bilingual version featuring her own English translation shows just how moving of a performer she was when it came to more serious material.

Musical tastes change with the times. In an attempt to make the old-fashioned sounding music of “Hymn of the Partisans” appeal to a younger audience, the Israeli Yiddish heavy-metal band Gevolt turned it into a rock song. While the result may not appeal to everyone it too is worth a listen.