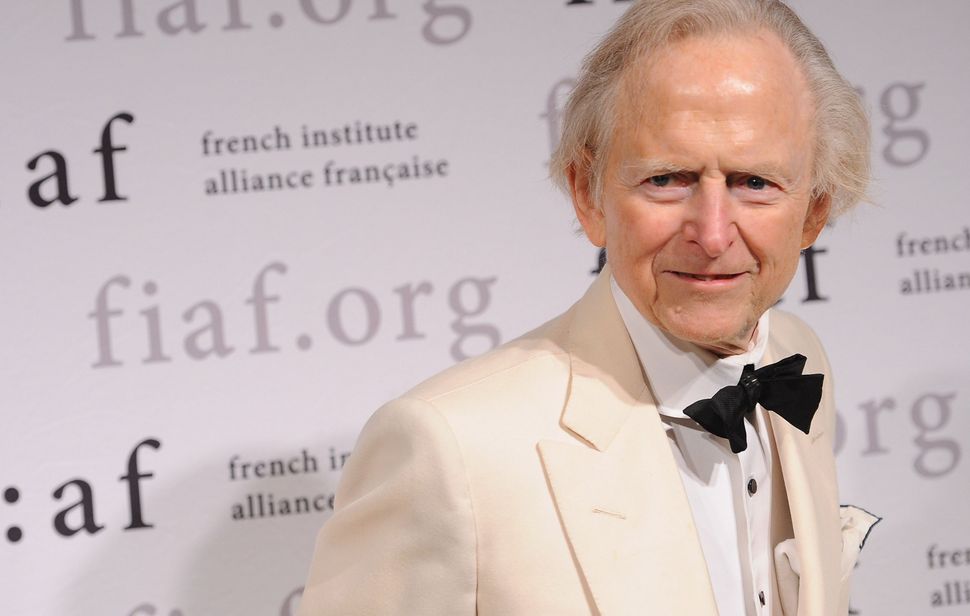 The satiric novelist and essayist Tom Wolfe died on May 14 at age 88 in the midst of world-wide celebrations for the centenary of Leonard Bernstein. This timing might have appealed to Wolfe’s well-developed sense of irony, since he authored “Radical Chic,” a savage takedown of Bernstein first published in June 1970 by New York Magazine, later reprinted in an essay collection. Also an architectural critic, Wolfe would be dubiously accused of anti-Semitism in 2006 by real estate magnate Aby Rosen after he opposed Rosen’s Upper East Side development plans.

“Radical Chic” contains vague generalizations about Jews as part of the satirist’s slash and burn style, but his attack on Bernstein showed no sign of being hostile to Lenny’s Judaism per se. The tzimmes began when Felicia Cohn Montealegre (1922–1978) the Maestro’s wife and an ardent civil libertarian, held a meeting at the couple’s Park Avenue residence to discuss legal representation for a case which became known as the Panther 21 trial. Twenty-one Black Panther members had been arrested and accused of planning bomb and long-range rifle attacks on New York City police stations. There was some doubt that the prosecution was legitimate, and in 1971 all defendants would be acquitted. Before this happened, the Bernsteins sought to raise funds for the legal defense of the accused, specifying that they were opposed to the Black Panther movement in its anti-Israel stance and other advocacies.

Wolfe’s extended essay starts and ends with a surreal description of an imaginary dream in which Bernstein sees an African-American man rising up from a piano. An uninvited guest, Wolfe underlined what he saw as the bizarre or comic juxtaposition of people of color with Park Avenue décor. Yet Wolfe did not coin the term radical chic, which has often been attributed to him. Seymour Krim (1922–1989), a Beat Generation writer who was lauded by critic Vivian Gornick as “a Jewish Joan Didion,” used the term in a collection of essays published in January 1970.

Nor was Wolfe the first to excoriate Bernstein for his Black Panther get-together. Although also uninvited, The New York Times covered the event by sending its society reporter Charlotte Curtis. Curtis focused on the Park Avenue hospitality involved, despite denials from both Mr. and Mrs. Bernstein that the occasion was in fact a party. Reports of their dallying with Black Panthers were published and reiterated by The Times, which insisted in a subsequent headline that the event was indeed a party. Bernstein wrote several drafts of self-justifications to be sent to outraged correspondents. These are available online at the Library of Congress website, with the rest of the voluminous Bernstein archive. In one dated January 22, 1970, Bernstein reiterated that he had no sympathy for the Black Panther organization, only for the right of all Americans to have a fair trial, which was the purpose of the gathering. In a letter to Connecticut’s Jewish Ledger in February 1970, Bernstein added:

“As an American and as a Jew, I know that religious liberty and civil liberty go hand-in-hand. Destroy one and you endanger the other. I know that my basic concern must be to fight for the survival of our democratic principles. If we deny these Black Panthers their democratic rights because their philosophy is unacceptable to us, then we are denying our own democracy.”

Friends rallied round, among them Rabbi Alexander Moshe Schindler (1925–2000), a leader of Reform Judaism. Schindler, who had escaped Nazi Germany as a boy, wrote to Bernstein in February 1970, declaring:

“I endorse wholeheartedly the ethical premise by which you were motivated, and I commend you for acting so forthrightly on a principle of justice. The Black Panthers may be abhorrent to our society, but they nonetheless are entitled to all the rights and fairness of treatment prescribed by our laws and our Constitution.”

Rabbi Schindler invited Bernstein to make public his letter of solidarity and when Bernstein did so, the rabbi followed up with a note the following month, declaring:

“You will be intrigued to learn that ever since you circulated my letter to you, I have been the object of poison-pen letters. I have been drawn and quartered and several times even defrocked – which does not bother me in the slightest, of course.”

Not every correspondent showed Rabbi Schindler’s courage and bonhomie. Will Maslow (1907–2007), a lawyer and executive of the American Jewish Congress, wrote to Bernstein in February 1970 to ask whether the right to counsel was really in jeopardy for the Panther 21 defendants. Maslow also inquired if there was any guarantee that cash contributed to the defense fund would be used for this purpose by the Black Panthers.

All this brouhaha occurred before Wolfe’s belated attack in New York Magazine, even if posterity has tended to remember the latter. Bernstein was no stranger to political uproar. Barry Seldes, author of “Leonard Bernstein: The Political Life of an American Musician” notes that a weighty FBI file was kept on the musician, whose left-wing political stances caused him tsuris throughout much of his career. Curt Gentry, a biographer of J. Edgar Hoover further explains that “in an attempt to ‘neutralize’ Bernstein,” the FBI tried to plant news items in the American media about Bernstein’s homosexuality, an open secret that was unprintable at the time.

Did the one-two punch of New York’s newspaper of record followed by japes from Wolfe do lasting damage to Bernstein’s reputation as a humanitarian? The ridicule surely provided a lifelong sting to the hypersensitive musician, compounded by the FBI’s plotting and other ill-intentioned mischief. Bernstein’s clownish public behavior on some occasions likely provided many reasons for lampooning him; yet his social advocacy inspired by a sense of Jewish ethics was not really a valid one.

In June 1970, Sheldon Harnick, the lyricist of “Fiddler on the Roof” wrote to New York Magazine admitting that he had attended the party and read Wolfe’s “irrelevant and distasteful article with pain and incredulity.” Harnick observed, much like Bernstein himself, that he had contributed money for the legal defense of “several members of an organization many of whose pronouncements I find abhorrent, because the abuse of their rights as citizens I find even more abhorrent.” Bernstein’s artistry continues to be celebrated, and his social activism appreciated, while it remains to be seen if Tom Wolfe’s dated satires will stand the test of time.