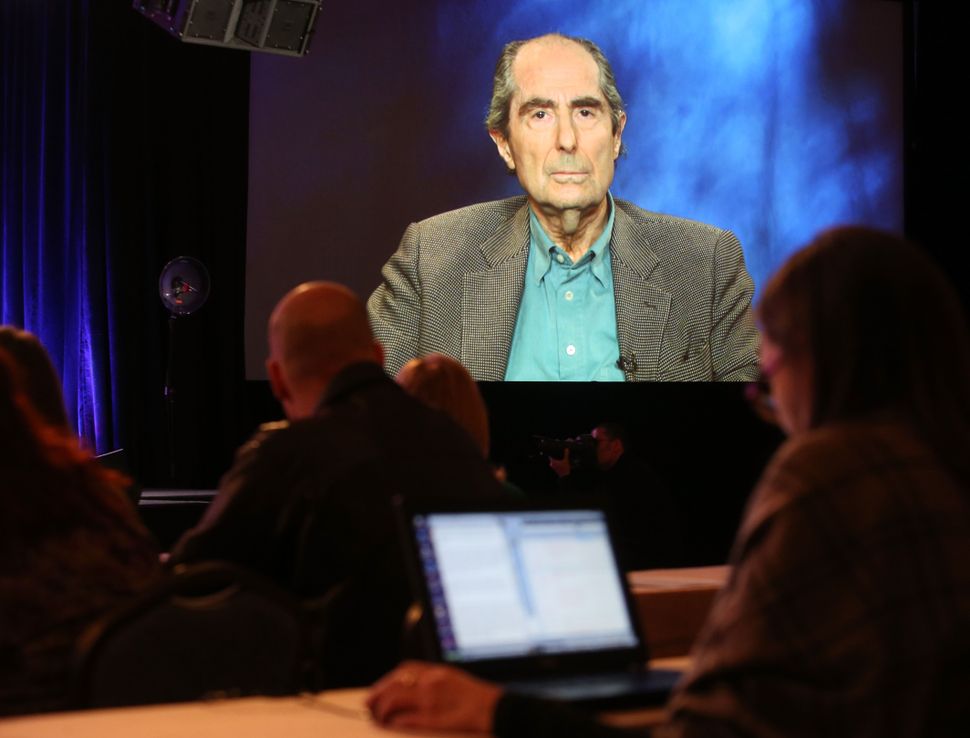 I last spoke with Philip about a week before his death. A few days earlier, I had emailed him the tape that I discovered of the 1962 Yeshiva University symposium that he’d remember always as a crucial turning point — one, in equal measure, dreadful and indispensable. It was just the sort of experience that, as he would later put it, “a writer would have had to be no writer at all to go looking elsewhere for something to write about.” “The luckiest break I could ever have had” as he puts it in his autobiography, “The Facts,” “I was branded.”

This, of course, the same Roth who had cagily instructed readers in the addendum to his autobiography to distrust the facts of “The Facts.” The “fictional world,” says this internal critic urging him to scuttle the text “is far more exciting than the world it comes out of.”

I learned of the tape from the Rav Kook biographer Yehuda Mirsky as well as from Harvard-based bibliophile Menachem Butler — both devotedly modern Orthodox Jews known to bemoan their movement’s ethnocentric slippage even at its flagship institution YU. The tape provided a glimpse of a now bygone, far less clotted past. The fact that Yeshiva University chose to mark its 75th anniversary in 1962 with a marquee featuring the already radioactive Roth alongside Ralph Ellison, author of “Invisible Man,” and Italian-American Marxist Pietro di Donato, probably a former or current Communist member, had the feel of a time capsule.

Roth’s telling of the episode would enter squarely into American cultural history, perhaps the only instance in the last half century when Yeshiva University is credited with reshaping American Jewish culture beyond its own, particular corner. The experience certainly left an abiding imprint on Roth. Still fuming in his essay “Writing about Jews” published a year later, he addresses by name — and with an undiminished fury — one of the rabbis whose criticism had surfaced at YU. “If there are Jews who have begun to find the stories that the novelists tell more provocative and pertinent than the sermons of some of the rabbis, perhaps it is because there are regions of feeling and consciousness in them which cannot be reached by the oratory of self-congratulation and self-pity.”

From the accounts of the symposium that I heard from those who were in the audience that evening, Roth was, much as he remembered, accosted by angry Jews once the program ended and confronted during the question and answer period by hostile audience members including Rabbi Emmanuel Rackman, later YU provost. Alas, the tape that I received didn’t include audience questions. But it contains the bulk of the formal proceedings that differ markedly from Roth’s recollection.

The most glaring difference is that the bulk of the audience clearly relished what Roth said. And contrary to his account, as related in “The Facts” – where he says the first question posed by the moderator was “Mr Roth, would you write the same stories you’ve written if you were living in Nazi Germany?”— it was Philip who first raised the Nazi analogy.

Roth was thus less victim than star of the evening. Time and again, the audience responded to him with laughter and applause. The greatest laughs were when he spoke, as he would in the essay “Writing About Jews” of a letter he received from a Detroit man furious about Roth’s short story “Epstein” included in “Goodbye, Columbus.” The story tells of a middle-aged Jew who has an affair with a Jewish lady living across the street and as a result is stricken with the clap. “Is it conceivable,” the letter-writer asks, “for a middle-aged man to neglect his business and spend all day with a middle-aged woman?” When Roth, after a brief pause, said “The answer is yes,” he brought down the house.

True, he didn’t misremember that he’d been pressed about the potential harm done by stories like his to the reputation, perhaps even the ultimate well-being, of Jews. But these criticisms were mostly directed at him by the evening’s moderator — YU teacher of literature David Fleischer — a significant influence on the literary blossoming of the young Chaim Potok, as he would gratefully recall. But that evening he was annoyingly long-winded, repetitive and made something of a fool of himself.

Fleischer was the one humiliated, not Roth. And he knew it. His admiration for Roth’s genius was palpable from the evening’s start and it was only Roth that he was interested in talking to. His hope, it seems, was to win Roth over, to persuade him to use his incomparable talent for the benefit of the Jewish people. But few of Fleischer’s arguments as to how the prime task of minority writers was to serve their own vulnerable community garnered more than the sparest applause.

No fewer than three times that night he acknowledged his failure, saying he knew that he represented a distinct minority in the auditorium with few agreeing with him. Roth, in turn, praised the audience for its discernment. By the program’s end, Fleischer resorted to arguing that Roth ought to emulate John Steinbeck who, as Fleischer saw it, had prettified his sharecroppers in “The Grapes of Wrath” so as to garner sympathy for them. Roth responded that if he felt inclined to write about sharecroppers, he would do no more or less than tell the truth. Once again, the audience responded enthusiastically.

The recording has Roth admitting openly that he was, by this point, simply “fagged out” by having to repeat himself time and again. He is heard pressing Ellison to say something about sharecroppers with the two all-but laughing on-stage at Fleischer’s bland insistence on literature’s essential utilitarianism. In reply to Fleischer’s argument that writing like Roth’s was likely to be misconstrued by neglectful or misinformed readers, Roth turned the tables on him asking if after teaching Coleridge in his YU classroom and finding that his students misunderstood him he would then stop teaching Coleridge, Even Fleischer now laughed together with much of the audience.

Roth readily acknowledged the undeniable reality of anti-Semitism but, referencing Buber, insisted that this was the byproduct of Jewry’s insistence that Christianity was wrong and Judaism right. And perhaps his cleverest response was to still another query from the man in Detroit, again with reference to ”Epstein” — “Why so much schmutz?” Roth said: “To which I have no answer….It is the question that literature is always asking with wonder and awe.” But, he adds, “to have to deny the possibility of [Jewish] infallibility, to have to deny the actuality of schmutz is to make Jews less than human.”

When I reached Philip on his cell phone in the hospital — he hadn’t responded to my email containing the recording, which he had told me that he was eagerly awaiting and which made me anxious — Roth assured me that his heart problem would soon be handled and he’d return home shortly. His voice was calm and measured, a voice that he come to adopt not, it would seem, back in New Jersey but as he came of age at the University of Chicago, or in those heady literary circles that embraced him already in his 20s.

What he might have said about the tape I can’t know. What bearing it might have had, if any, on his own sense of how he made his way to become the most significant American writer of his age is unclear. Undoubtedly, YU provided him with a splendid foil, a packed, eager, inquisitorial audience bearing down on him in that room and beyond challenging him to be as clear as he could be about literature’s most essential tasks. ‘The story of Lou Epstein,” he said that night, “stands or falls not on how much I know about Jewish tradition but on how much I know about Lou Epstein.” Inspired by this insight, self-evident but in the room that Philip recalled with such fury and determination one of fierce contention, would emerge some of the best writing of our time.

Steven J. Zipperstein teaches at Stanford and is author, most recently, of “Pogrom: Kishinev and the Tilt of History” (Liveright, W.W. Norton). He is currently at work on a biographical study of Philip Roth for Yale University’s series, Jewish Lives.