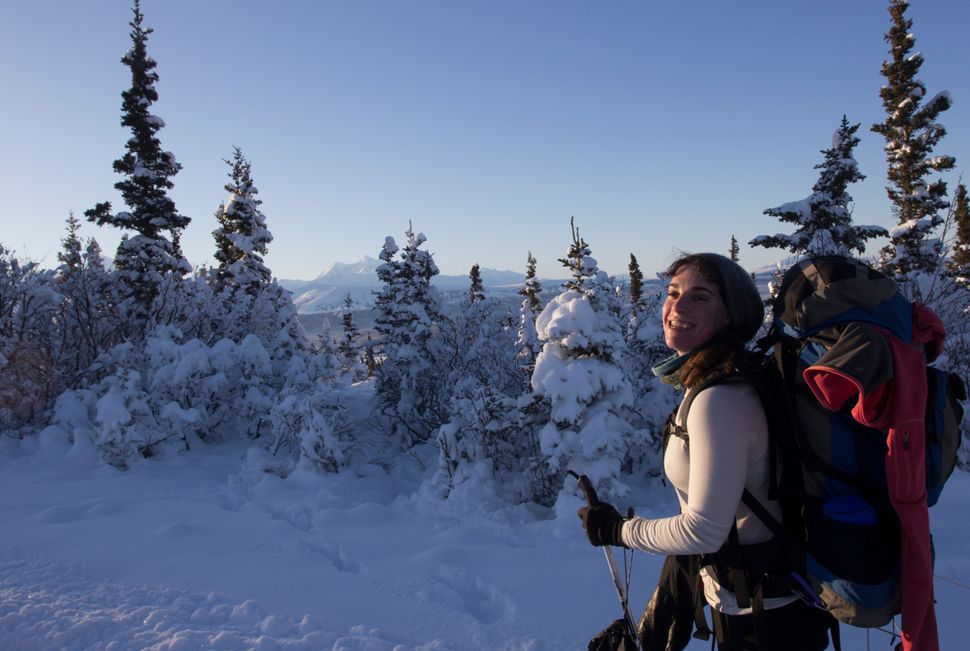 According to family lore, my great-grandmother had three sets of dentures: One for dairy, one for meat and one for Passover. I fear she would be rolling in her grave if she knew that I lived without running water for four years. It’s debatable whether I maintained one set of clean dishes; the prospect of washing two separate sets was laughable. From 2014 to earlier this year I called Fairbanks, Alaska — a place where many residents live without plumbing to avoid dealing with pipes bursting when the temperature drops to negative 40 — home.

I was raised the type of East Coast Jew who loves matzo ball soup but absentmindedly eats toast for breakfast the morning after Seder. We only went to shul if we were visiting my grandparents, though my father insisted that I have a bat mitzvah. (This, despite the fact that he defines himself as an atheist. We’ve all got inconsistencies.)

I first came to Alaska for a summer job studying climate change, tromping around bogs and fixing instruments that measured greenhouse gasses. Straight out of college, I was looking for adventure. I never imagined that Fairbanks would become home. That summer I was too infatuated with the canoe trips, wild blueberries and endless daylight to notice the lack of Jewish camaraderie. There were a handful of Jews in my social circles, but I was shocked at how little exposure some of my friends had to Judaism. While being irrationally nervous that I hadn’t made enough food for a dinner party, I might mention that I learned this trait from my Jewish mother. The conversation would abruptly stop as a friend asked “Wait, you’re Jewish?” If I responded by saying that of course I was Jewish, my last name is Cohen, they would stare at me blankly — and then ask me to explain Judaism. Each time, I was left confused about why a casual reference to a stereotype completely derailed our conversation. 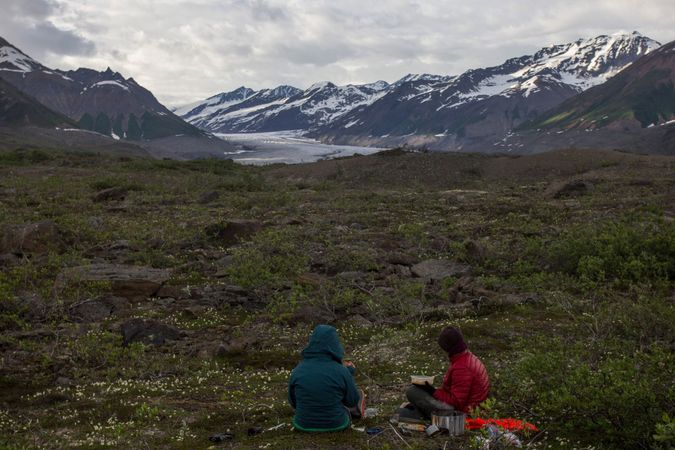 The author in Alaska. Image by John Harley

Yet I happily told my friends about my relationship to Judaism. I found a surprising amount of joy in sharing traditions with newcomers to Jewish holidays. When I threw my first Hanukkah party, my friends were eager to learn the stories and eat crispy latkes. A festival of lights is no joke when the sun only peeks above the horizon for three-and-a-half hours per day.

I cohosted the first Seder I held at my cabin with one of my few Jewish friends. She spent much of her time guiding backcountry trips, salmon fishing from her remote cabin and leading dog mushing tours, so I was lucky to catch her in town. We knew each other through an Ultimate Frisbee team; most of our guests also played. One of our teammates brought the most beautiful homemade challah that I have ever seen. Excited to attend his first Passover, he learned how to make it for the occasion.

Yet he was not the only source of questionable food that night. The “brisket” I had prepared was actually a moose roast. My mother assured me that moose was kosher because she had read so on the internet, but I had doubts. Moose have cloven hooves and chew their cud, but this moose was shot by a friend, not slaughtered according to kosher law. Since there are no domesticated moose, securing a kosher roast would first require finding a rabbi prepared to tackle a 1200-pound wild animal that can capably fend off a bear.

When Rosh Hashanah rolled around I pulled out the slop bucket from under my sink and we threw bits of bagels into the grey, sudsy water. (Because my cabin had no plumbing, my sink opened up to a 5 gallon bucket that I emptied into my backyard.) Looking back at my first year in Alaska, I realized that I had never hosted so many Jewish events before. As my second winter solstice approached, I worried that if I didn’t host another Hanukkah party there might not be one among my friends. I promptly bought a 10-pound bag of potatoes. In the Northeast, I could afford to be lackadaisical about practicing Judaism because many other people did the work of community building, practicing traditions and teaching the next generation. Their work allowed me to drop in whenever I wanted. With so few people to hold that space for me in Fairbanks, I began to step up. 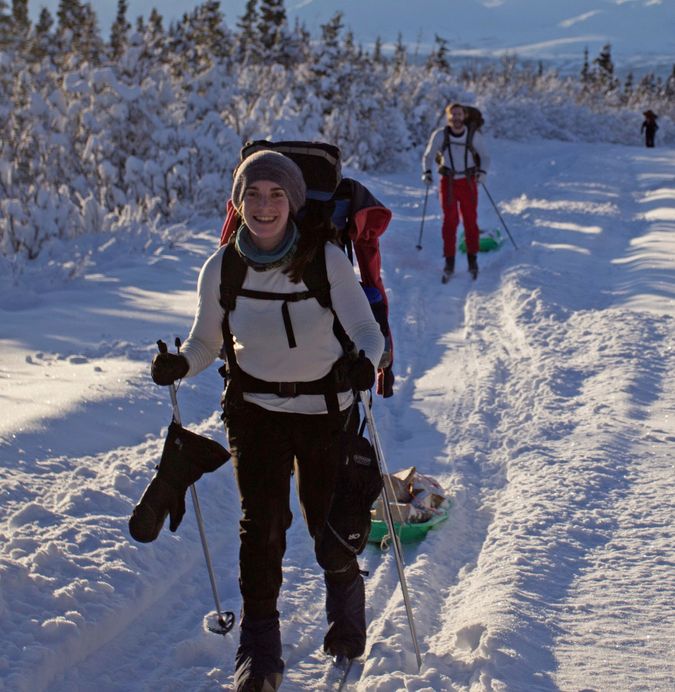 The author, in Alaska. Image by John Harley

Finding a congregation seemed like an obvious place to start, and Fairbanks has a Reform synagogue that resides in a former duplex. It’s too small to have a rabbi or Saturday services, but a community member leads services every Friday night. The first time I went less than ten people came, two of whom were aurora-chasing tourists. Everyone was kind and welcoming, but it wasn’t exactly a bustling community. I must admit to being put off by the shirts sold by the congregation, which proudly read “The Frozen Chosen;” the exclusionary themes of Judaism make me cringe. I only made it back for one other service.

Instead, I found other ways to integrate more Jewishness into my Alaskan life. I started learning about the role of Jews in the recent history of Alaska; I was shocked that Ernest Gruening, the Alaskan territorial governor who lobbied Congress for statehood until it passed in 1958, was born Jewish. He became a senator, and got a building named after him on the University of Alaska Fairbanks campus, where I worked. I spent years walking by that building without a clue as to who he was. I also began reaching out to my aunts and uncles who served as guardians of my family’s lineages, hoping to learn more about my own family’s history. For one Passover, I even imported my mother. She came armed with the Haggadot that her family used as a child. They literally fell apart on our plates, but they still had my grandfather’s annotations. 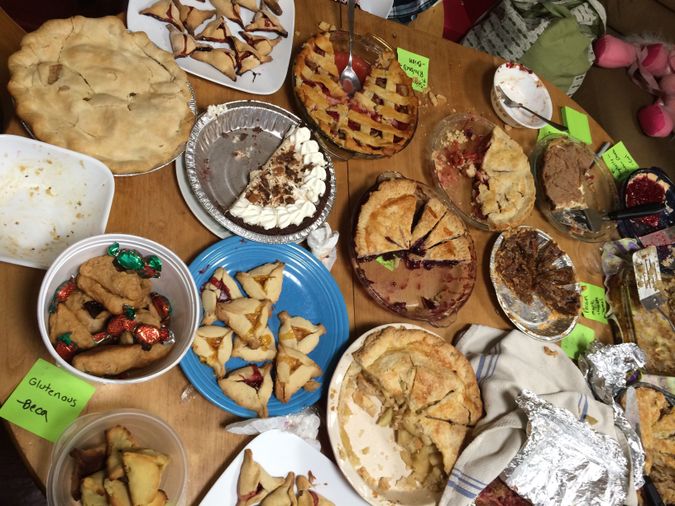 Some of my Alaskan friends had attended colleges that had exposed them to enough Jewish holidays for them to know their favorites. Through graduate school, they found their way to Fairbanks, where they started lobbying for me to throw a Purim party. For over a year I ignored the lobby’s demands. While I had learned about Esther in Hebrew school, I had only ever celebrated Purim when my Hasidic uncle who lived in Israel dispatched one of his stateside children to pay us a visit. My cousin would show up in our kitchen with a Purim basket, groggers and a child or three in tow. I would sit on my mom’s lap getting increasingly fidgety while my cousin chanted the entire Megillah.

When I learned that Purim was only two days before Pi Day, though, I succumbed to the wishes of the people and threw a joint Pi(e) and Purim celebration. The dining room table overflowed with pie and hamantaschan while we read a Dr. Suess-inspired abbreviation of the Megillah. A whopping four Jews were in attendance that night. It ended up being the crowning achievement of my Jewish tenure in Alaska before I returned to the East Coast.

The process of deciding to leave Alaska took me over a year and required many forms of heartbreak. One of the forces that pulled me back home was the hope of finding a Jewish community that would teach me some of the many traditions that my halfhearted Jewish upbringing missed. After cramming my car full to the brim, I left Fairbanks on a brisk negative-20 degree morning. Some might say that February was not the best time to drive a low clearance two-wheel drive vehicle out of Alaska. I would say that if I wanted to make it to Passover with my family and have time to explore the Southwest along the way, then February was the perfect time.

For almost two months I meandered my way through snow storms, three weeks of camping in below-freezing temperatures and visits to the newest toddling members of my Midwestern family. When I finally arrived back home, I found myself dumbstruck by the vast array of matzo options in the grocery store. They took up so much shelf space that I could not fit them inside the frame of one photo. In the produce section there was no horseradish to be found, but I did encounter an elderly women berating an employee: “I was here yesterday and they said there would be horseradish tomorrow, and now I’m here and there is still no horseradish!”

Hoping to diffuse the tension, I cut into their conversation and cried, “it’s a Passover tragedy!” Both of them chuckled. It felt good to be home.