Why A Hebrew Phrase Is Causing A Hullabaloo In Austria 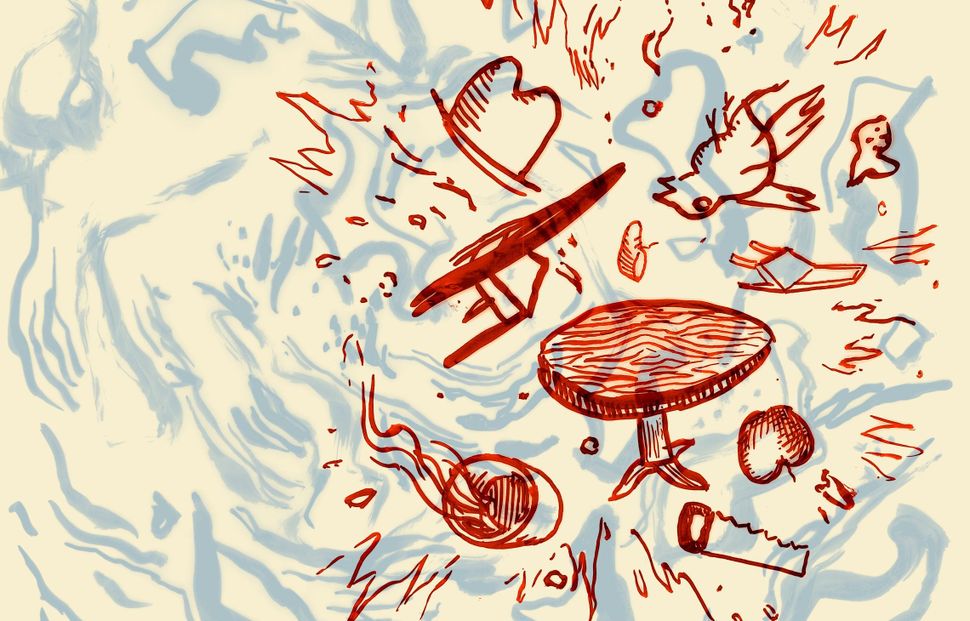 Over beers in Jerusalem, a writer I know shared a fascinating linguistic tidbit from his recent research trip to Austria. He said he had heard the Hebrew phrase tohu va’vohu, from Genesis 1:2, memorably translated by Everett Fox as “wild and waste,” used in Vienna. As slang, he thought. In any case, tohu va’vohu seemed to be part of a German conversation.

Intrigued, I asked the writer — Benjamin Balint, the author of the forthcoming “Kafka’s Last Trial” — for an example. I wanted to hear it used in a sentence.

“This room is completely tohu va’vohu,” he generously offered. “Go clean it up.”

Balint believed that most Austrians were unaware that the phrase was Hebrew, or biblical. It must be said that this is probably one of the hardest moments in the Torah to translate, as well as one of the most famous. The combination tohu va’vohu also appears in Jeremiah 4:23, and both words appear in Isaiah 34:11, though they are not combined in the exact same way.

Genesis, however, provides the most well-known example. There, the 1985 Jewish Publication Society translation renders tohu va’vohu as “unformed and void.” That JPS translation connects verses 1 and 2 of Genesis 1, so that the opening of the Torah reads like this: “When God began to create heaven and earth — the earth being unformed and void, with darkness over the surface of the deep and a wind from God sweeping over the water…”

The King James translation has “without form, and void” for tohu va’vohu, and The New International Version translation, which is used by many evangelical Christians, has “formless and empty.” Robert Alter renders it as “welter and waste” in his translation.

But what Balint was describing wasn’t a translation; instead it was a simple lift of Hebrew into German. I decided to do a bit of sleuthing and look into it. Had the ancient Hebrew of Genesis indeed moved into Viennese German?

I first approached Chicago-based translator Annie Janusch, who has translated four novels by the Austrian writer Wolf Haas, and who was awarded a National Endowment for the Arts fellowship in translation. I waited patiently for a response, unaware that Janusch was at a translation conference. (Translators like to be around other translators.)

“‘Tohuwabohu’ is a fairly common expression in German that’s used to mean confusion, commotion, chaos,” Janusch wrote me when she returned.

I also got a quick course in pronunciation. In German, the Hebrew tohu va’vohu was tohuwabohu.

Janusch suggested I contact David Dollenmayer, the award-winning translator of German into English and an emeritus professor of German at Worcester Polytechnic Institute; his most recent translation is “Idyll with Drowning Dog,” a novella by the contemporary Austrian writer Michael Köhlmaier.

Dollenmayer, reached on a road trip, said it was more than just an Austrian phenomenon.

“As far as I know, Tohuwabohu is not confined to Austrian German, but is quite commonly used throughout the German-speaking world to mean chaos, confusion, hubbub, hullabaloo.”

But Dollenmayer said he wouldn’t call it slang. It had likely entered the German lexicon by the late 19th century, he said. Still, the term existed, in German — or to be more accurate, in the German-speaking world. Balint’s ears had not deceived him.

Alex Zucker, the translator of Czech literature, former co-chair of the PEN Translation Committee, and a longtime connector of translators, recommended that I speak with Peter Constantine, who translates from many languages and has won wide acclaim for his translation of “The Complete Works of Isaac Babel,” as well as the stories of Thomas Mann. Constantine was born to an Austrian mother.

“What a fascinating question!” Constantine said, when I asked about whether the biblical tohu va’vohu was used by Austrians. “We do use it in Austrian, though I think many millennials probably don’t know it at this point. I found out by chance a few years ago that it was from Hebrew — I just called my Austrian cousin (she’s my age, 55) and she didn’t know it was Hebrew.”

“It is also used in Germany. One of my mother’s favorite comedic writers was Tom Sharpe,” Constantine added. “I got her his first novel ‘Riotous Assembly,’ which was published in Germany as ‘Tohuwabohu.’”

“There was also a comedy series in Austria in the ‘90s called Tohuwabohu,” Constantine added. He sent me a link.

Just the fact that the biblical Hebrew phrase tohu va’vohu had become an Austrian comedy series was hilarious; I didn’t even need to watch it to laugh. But now I really wanted to know more about how on Earth ancient Hebrew had made it into Austrian popular culture, so I contacted the award-winning translator and essayist Tess Lewis, also recommended by Zucker.

Lewis most recently translated “Angel of Oblivion” by Maja Haderlap — the Slovenian-German Austrian writer — which won the 2017 PEN Translation Award. The novel is based on the true life experiences of Haderlap’s family and neighbors, who fought as partisans against the Nazis, and examines how they were treated by German-speaking neighbors in the decades after the war.

Lewis had encountered tohuwabohu before.

“It’s a commonly used term, not just in Austria, but in Germany as well. However, I believe it is more common in Bavaria and Austria,” she said. “In Austria it’s used both in the sense of ‘hullaballoo’ and of a chaotic situation, a complete mess, usually with derogatory and/or disapproving overtones.”

“Most Austrians and Germans are not aware of its etymology,” Lewis said, echoing Balint’s initial hunch. “The friends I asked are because they are writers and academics and one of them is half-Israeli — Doron Rabinovici, whose novel “Elsewhere,” an academic satire about a sociologist who gets himself in trouble in Tel Aviv and Vienna for comments he makes about Holocaust memorials, I translated.”

“In the ‘90s there was a cabaret-type comedy show on Austrian television called ‘Tohuwabohu’ that ran for eight years and was successful by Austrian standards.”

Lewis’s friends provided a different YouTube link — saying these were the best scenes. I could feel it: some binge-watching of Austrian comedy was in my future.

I thought this was the end of the investigation of Tohuwabohu, aka tohu va’vohu, but a few weeks later I heard from Lewis again.

“In one of those cases in which you suddenly see a word or topic everywhere, I just came across Tohuwabohu in a Swiss novel I’m translating from German. I checked the French translation and it uses tohu-bohu,” she said.

The borrowing from Genesis now extended to Switzerland. And France. But there was more, Lewis said. She had found some historical evidence.

“I’ve attached a photo of the French dictionary entry for it: Rabelais used it in the 1500s as did the Goncourt brothers in the 1800s,” Lewis wrote, making my day. “It later also came to mean a loud confused noise.”

So those beers in Jerusalem had led me down an international trail. Tohu va’vohu, the biblical Hebrew term that has long challenged translators of the Torah, and that often elicits a dozen or more lines of commentary from the medieval Hebrew commentators, had moved into French by the 1500s, and German by the 1800s. At last count, tohu va’vohu, transformed into tohuwabohu and tohu-bohu, had found its way to Austria, France, Germany, and now, Switzerland.

And of course, through the power of YouTube and the internet, tohuwabohu may very well be on its way to going global. This is fitting, of course; the term describes the time before creation, before humans stalked the earth. Now, tohuwabohu might as well move around the known world, encompassing all the “confusion, chaos, and commotion” — or, to preserve the echoing ooh of the Hebrew tohu va’vohu, the “hullabaloo” — of the contemporary, human-filled universe, home to all languages, and all of us.

Why A Hebrew Phrase Is Causing A Hullabaloo In Austria