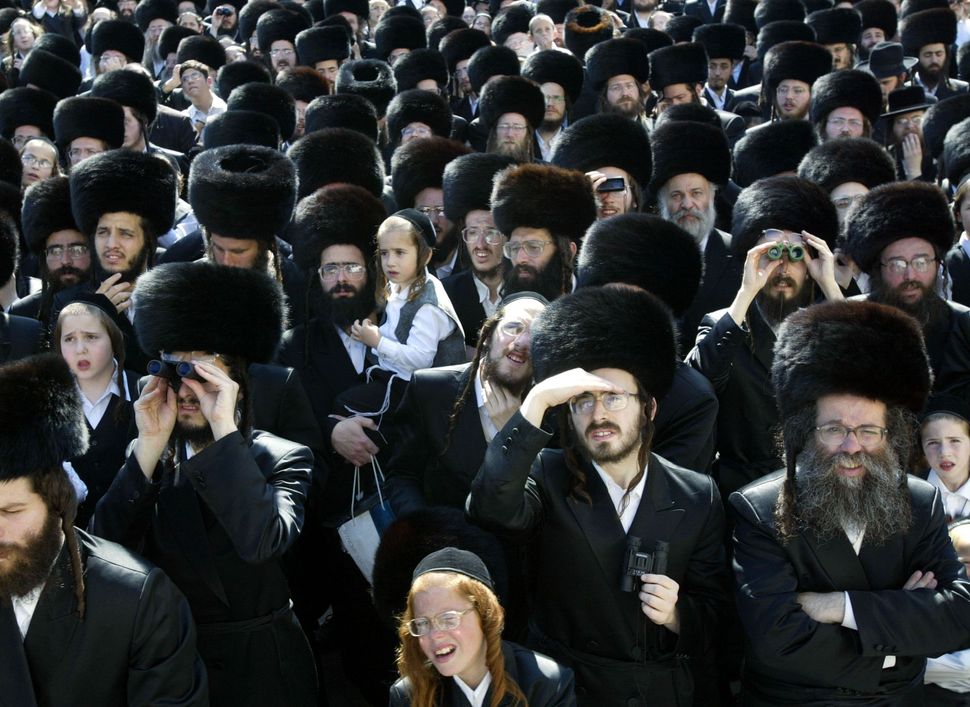 The Smithsonian has celebrated a new book, “Hasidism: A New History,” edited by David Biale, as a landmark. This collaborative effort of eight men has been underway for a decade, and the publication is massive: 850 pages. All written by men. The preface informs us that a distinguished female scholar of Hasidism participated extensively in the project and read the entire manuscript, but she withdrew her name from authorship because she had to leave the project early. While she is unique as a deeply learned scholar of Hasidism, she is not the only one. Where are the women? Even the afterword was given to a man. In this book, men write about religion, men write about politics and men write about women in the Hasidic movement. Eight hundred and fifty pages of mansplaining.

And the book’s reviewers have not noted the exclusion of women. Perhaps the reason the book’s maleness was not striking is that it is not unusual in the field of Jewish studies. Just a few recent examples show the ubiquity of this problem: “Jewish Theology in Our Time” includes 24 articles, but only three by women. “The Weimar Moment” includes 20 articles, all of them by men. Though co-edited by a woman, “Judaism, Liberalism and Political Theology” has only three of thirteen articles by women. “Heidegger’s Black Notebooks: Responses to Anti-Semitism” has 12 articles, only one by a woman. Of the 37 biographies published thus far in Yale’s “Jewish Lives” series, only five are biographies of women, and only 10 of the books have been written by women. An earlier book edited by Biale, “Cultures of the Jews,” contains twenty-three articles, only three by women.

Journal editorial boards tell a similar story: Modern Judaism has two women on the 10-person editorial board; Israel Studies Review has eight out of 35; the Internationale Rosenzweig Gesellschaft has one woman of six; the Jewish Review of Books has four of 12. Having a woman editor does not automatically fix the problem: Although a woman edits or co-edits each, The Jewish Quarterly Review editorial board has five women out of 20, and Contemporary Jewry has nine out of 36. By contrast, Prooftexts has 11 women out of 20; AJS Review has five of 11, demonstrating what does not actually require demonstration — that plenty of serious women scholars are available for inclusion.

Given the presence of cutting-edge women scholars, male-dominated projects raise an interesting cultural question. Numerous women are on the faculties of universities and are active as scholars, junior and senior, in precisely the fields mentioned above. Women have by now assumed leadership positions in several academic Jewish Studies organizations, including the presidency of the Association for Jewish Studies and the British Association for Jewish Studies, and some hold endowed chairs at Ivy League institutions. Why, then, would women not be included in these projects? What sort of culture predominated, for example, in the four-year annual gatherings of the male Hasidism scholars? As they spent their summer months together, discussing their work at the Simon Dubnow Institute for History and Jewish Culture in Leipzig, did none of them find it strange to be in an all-male conversation? If not, what does this say about the field?

In discussing the problem with female colleagues, both senior and junior, what emerges is extraordinary frustration. Every woman can recount examples of being marginalized, patronized and excluded by male colleagues. Women’s scholarship is at times not cited by male colleagues, even when those men “borrow” directly from women’s publications; women’s innovative interpretations are ignored or treated as inconsequential — until a man says the same thing and people listen. As the sole woman at a conference can tell you, tokenism carries its own set of problems, which is why gender parity, not the inclusion of one or two women, is the goal.

Why does this matter? Excluding women is damaging to their scholarship and careers; it is also nasty and unethical. It affects hiring, salaries and grants — all of which have very tangible effects on women’s careers. Given the growing number of women entering academic life, for senior male scholars not to include younger female scholars in conferences and anthologies limits women’s career paths and will ultimately diminish the debates that make a field vibrant. Moreover, the exclusion of women from so many areas of Jewish studies hurts the field: Not only do we intellectually limit ourselves when we fail to hear from women scholars, but we also make the field of Jewish studies look ridiculous in the eyes of our academic colleagues. Universities and scholarships become great by being infused with multiple disciplines and perspectives. Indeed, the mandate at nearly all universities today is to increase diversity in order to increase intellectual sophistication. Think of how the field of the New Testament has benefited by including Jewish scholars who bring knowledge of Hebrew texts and a critical voice to Christian assumptions about first-century Judaism. In similar ways, omitting women’s scholarship hinders academic progress in Jewish studies.

This exclusion will also hurt the future of Jewish studies. Women with an interest in entering the field will wonder: Will I be welcomed and mentored by the men who dominate the senior levels of the field? And if I bring innovative ideas and interpretations, will they be dismissed, or treated with respect? They will see many serious, respected women scholars whose work is admired by their colleagues in adjunct fields but too often not cited, invited or published by men in Jewish studies. If this is the state of the field, perhaps we should urge women not to enter it. After all, one can study medieval Jewish history, for instance, via either a Jewish studies program or a medieval history program.

The extraordinary irony is that the field of Jewish studies struggled since the early 19th century for its place at the academic table. Jewish studies scholarship is still too often ignored within the academic world and treated by colleagues precisely the way women are treated within Jewish studies. Even as we insist that no complete understanding of history, politics, philosophy, religion, literature, culture and every other topic is possible without including Jewish experience, we cannot claim to have a complete understanding within Jewish studies if we exclude Jewish women as colleagues and as topics of study. Studies have not yet been published on the problems faced by gay and lesbian, queer, trans and gender nonbinary scholars in the field, but there is good reason to think that both the problems and the strategies outlined here also have relevance for these scholars.

Let us be clear: Gender bias is not necessarily deliberate but may often be unconscious and require deliberate attention to overcome. What is striking is that many of the men who have not included women on their editorial boards or in their edited volumes are not right-wing, ultra-Orthodox scholars who might have a deliberate religious or political objection to working with women colleagues. On the contrary, most think of themselves as liberal and progressive, and they are often innovative leaders in the field, yet they, too, may overlook, ignore and exclude women. Even women in positions of power can be guilty of excluding and ignoring other women.

What to do? Look at a list of potential speakers at a conference, or contributors to an edited volume or journal, and see if there is gender parity. Speak up! Decline an invitation to participate unless there is gender parity. Keep in mind that gender bias is not limited to men; women, too, need to be deliberate in the invitations they extend and accept. Pay attention to language: When scholars use language of “good fit,” “stature” or “prestige,” these can often signal implicit bias. If you are part of an organizing committee, push for explicit criteria: Is “stature” about the number of publications, the current academic position or something else? Is “good fit” about matching research interests, or is it a cover for inviting the good old boys? Once these criteria are on the table, it is much easier to advocate for inviting particular women. Mentor junior women in your field and invite senior women to collaborate on a project.

Foundations and publishers should also stop supporting all-male conferences and publications. The Hasidism volume, for example, thanks several foundations and institutes for the important financial support that brought together the eight men for four summers of collaborative research; why did those foundations and institutes not insist on gender parity as a condition of funding, and why don’t publishers question all-male submissions? It is untenable to claim that no qualified women were available; look at the list of Guggenheim fellows to see the extraordinary number of brilliant women scholars. If there is a lack of women in Jewish studies, perhaps the field itself is to blame. If male scholars cannot correct the bias, perhaps pressure must come from outside. It is time for grants to be denied to projects and conferences that are all or mostly male.

Consider the implications: By not including women scholars, you are deliberately distorting the state of the field, narrowing the range of knowledge and interpretation, and excluding important areas of research and insight. To include women means not simply the presence of female bodies, but of great minds, important experiences and points of view that enhance the quality of scholarship. The answer: We are here. Listen to us.

An annotated bibliography of studies regarding gender bias in the academy can be found here:

Susannah Heschel is the Eli Black Professor of Jewish Studies and chair of the Jewish Studies Program at Dartmouth College. She is a Guggenheim Fellow and the author of “Abraham Geiger and the Jewish Jesus” and “The Aryan Jesus: Christian Theologians and the Bible.”

Sarah Imhoff is Associate Professor in the Borns Jewish Studies Program and Religious Studies Department at Indiana University. She is the author of “Masculinity and the Making of American Judaism.”