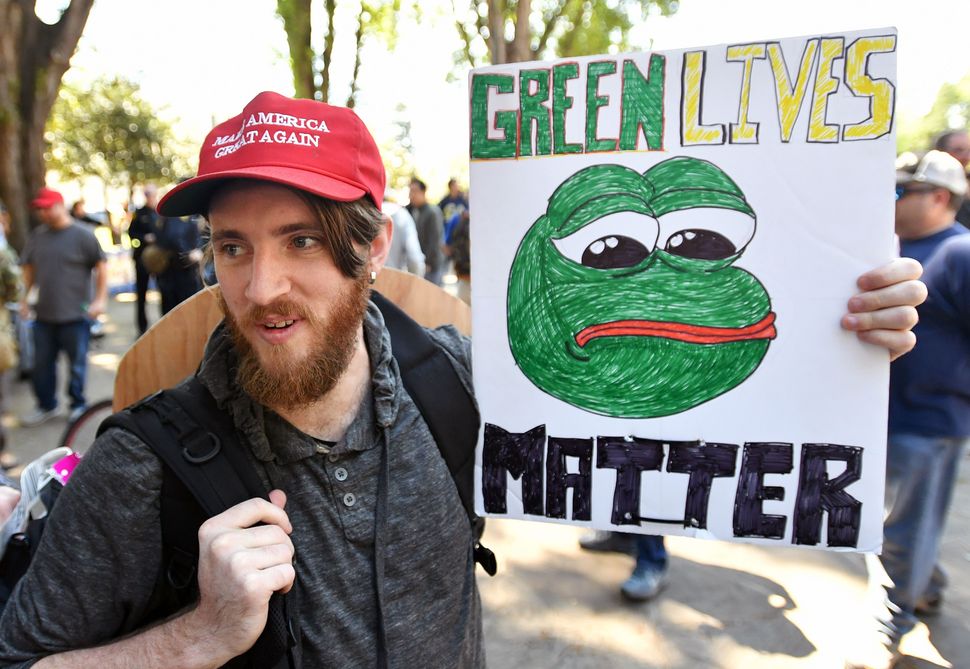 Pepe the Frog, the unwitting mascot of the so-called alt-right, is on the fast track to bettering his personal brand. Motherboard reports that the legal team of Pepe’s creator, Matt Furie, has successfully petitioned neo-Nazi website the Daily Stormer to take down Pepe’s unlicensed image. The removal marked a victory for the web-footed innocent who’s had his good name dragged through internet mud.

Described in a copyright lawsuit against InfoWars as a “kind and blissful cartoon character,” Pepe became an icon of white nationalist circles during the 2016 election when social media seized on an image of then-candidate Trump as Pepe, a picture that was retweeted by Trump himself. Pepe was labeled a hate symbol by The Anti-Defamation League the same year. The frog, known for his catch phrase, “feels good, man” was used in promoting Richard Spencer’s podcast and was even the subject of the bigoted children’s book “The Adventures of Pepe and Pede,” which was written by a middle school assistant principal named Eric Hauser. In 2017 the book prompted Furie to seek legal representation to defend his amphibious creation. His lawsuit resulted in a settlement. The book was pulled, and Furie has been on a crusade to protect his character ever since.

The law firm Wilmer Cutler Pickering Hale and Dorr LLP, which is working Furie’s case pro bono, told Motherboard that The Daily Stormer has been something of a white whale in their quest to remove Pepe’s likeness.

The website, founded by the outspoken white nationalist Andrew Anglin, has receded to the dark web after losing its domain and email provider in the wake of last August’s Unite The Right Rally, organized by Anglin and The Daily Stormer. The rally ended in tragedy when a protestor who had travelled to participate in the rally struck and killed counter-protestor Heather Heyer with a car, prompting the Daily Stormer’s domain registrar, GoDaddy, to deny the site their services.

The loss of providers and a string of cyber attacks forced The Daily Stormer to go on the run, as they moved to and were subsequently kicked off a series of domains. This constant shifting of IP addresses meant that Furie’s attorneys were forced to wait for the website to rematerialize before serving copyright infringement notices to its current provider.

This month, that effort finally proved effective. By Motherboard’s count, of the over 40 articles featuring Pepe, only four remain up.

Even as a moving target, The Daily Stormer’s case was centralized in a way that those concerning other alleged violators of Furie’s intellectual property aren’t. More difficult to address, for instance, are the independent sellers on Amazon who have built a cottage industry around bootleg Pepe merchandise.

But even if the haters are tough to stamp out, Furie likely won’t let them get him down. The cartoonist closed a 2016 op-ed in Time magazine by claiming Pepe for the good guys: “I understand that it’s out of my control, but in the end, Pepe is whatever you say he is, and I, the creator, say that Pepe is love.”