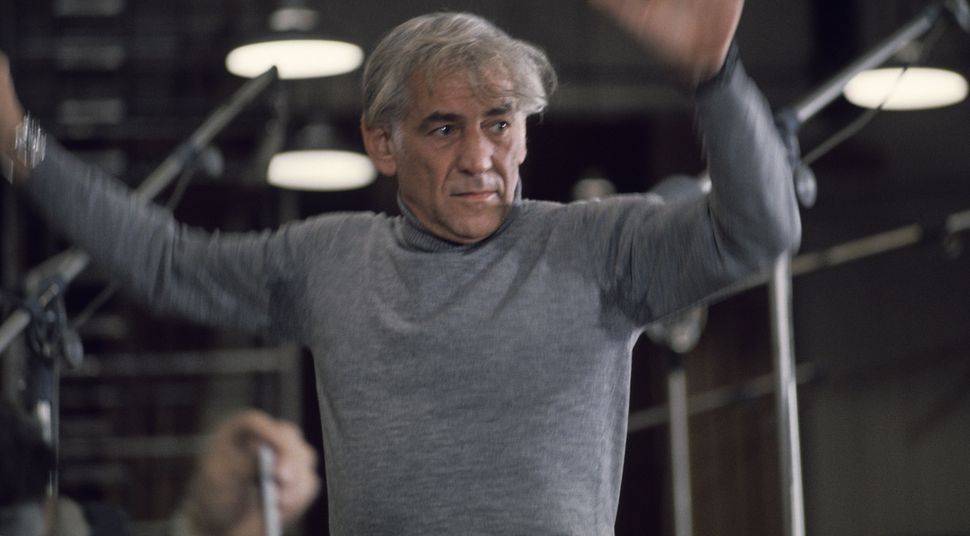 Composer Leonard Bernstein in a recording studio on November 5, 1974 in New York. Image by Getty Images

With August 25 marking his centenary, Massachusetts-born Leonard Bernstein (1918-1990) remains the 20th century’s most famous Jewish musician. His Symphony No. 1 Jeremiah and Symphony No. 3 (Kaddish), among other works, are lasting contributions to the orchestral repertoire, as memoirs by musical associates, including Jack Gottlieb and John Mauceri attest.

Bernstein’s Yiddishkeit was essential to his artistic expression. He liked to call himself a “chip off the old Tanakh,” Gottlieb reveals. In time for Bernstein’s 100th birthday, intimate memoirs have appeared by his daughter Jamie and Charles Harmon, a factotum who states that Bernstein would roar at interlocutors: “You don’t talk that way to the rebbe!” Admiring and loving, but also candid, these books raise questions about just how righteous the rebbe was in his life and career.

Past biographies have been bland or hagiographical. There was also a book-length arraignment by Joan Peyser, who accused Bernstein of committing an “act that was at least anti-Jewish, at most anti-God.” What was Bernstein’s sin, in Peyser’s eyes? He ate an oyster. She also appeared to be scandalized by the fact that during Bernstein’s first trip to Israel in 1948, he indulged in love affairs with local male residents, including Azariah Rapoport, a soldier who served as his guide, and the Hungarian-born artist Yossi Stern. A joyous 11-page illustrated letter by Bernstein and Stern (1923-1992) is in the collection of the Library of Congress. Written by Bernstein to his mother Jennie, it recounts childlike adventures in Israel with no reference to the Bernstein-Stern relationship.

Yet Bernstein’s passion for the State of Israel clearly went beyond such flings. The devotion heard in his conducting of Hatikvah at a concert on Mt. Scopus in July 1967, just weeks after the end of the Six Day War, is permanent evidence of that connection. Bernstein’s essay on music in Israel which appeared in the Pittsburgh Press in August 1949, offers further proof that his longest-lasting love was with the nation of Israel, not with some of its inhabitants:

“Israel is probably the most musical nation, per capita, on earth. Almost everyone there seems to be a genius on the piano, or a composer of intense seriousness.”

Other analyses of Bernstein cast doubt on the intense seriousness of his ethics, at least on occasion. Barry Seldes, in a study of Bernstein’s political life, repeats an allegation by a biographer of the Greek conductor Dimitri Mitropoulos, one of Bernstein’s mentors. The young Bernstein supposedly betrayed Mitropoulos by divulging to the Boston Symphony Orchestra and the New York Philharmonic that his mentor was homosexual, thereby ruining the Greek maestro’s career with both ensembles and clearing the way for Bernstein’s own skyrocketing renown. By the 1950s, Bernstein was married and the father of a family, which provided cover to refute any potentially damaging rumors about him. Bernstein’s allies have dismissed the possibility of betrayal, calling it uncharacteristic and not reflecting his genuine esteem for Mitropoulos. Yet even if he did not deliberately pass along information about Mitropoulos’s sexuality, Bernstein was notoriously indiscreet in everyday speech. A 1980 appearance at New York’s Symphony Space as recounted by the biographer Humphrey Burton proves as much: when the distinguished elder composer Aaron Copland did not appear on cue at the podium, Bernstein gleefully informed the public from the stage: “He went to pee.” In earlier life, Bernstein may have been somewhat more prudent, but the question remains open of what really happened with Mitropoulos.

Bernstein’s actions during the treacherous McCarthy era have also been examined. In 1953, to placate the House Un-American Activities Committee and renew his passport, Bernstein offered a formal deposition stating that he had never belonged to the Communist Party. To explain a leftist petition he had signed to protest Fascist Spain, Bernstein stated that the African-American singer Paul Robeson had personally contacted him to request his signature. Robeson was already controversial as an activist, so naming his name was perhaps not as noxious as it might otherwise appear. More overtly destructive informants, denouncing friends to protect their own careers, included the choreographer Jerome Robbins (born Rabinowitz), a long-time Bernstein collaborator, and director Eliza Kazan, whose film “On the Waterfront” Bernstein would write the score for. Bernstein willingly worked with these cooperative witnesses from the McCarthy era. Dealing with different levels of iniquity, he would also conduct former supporters of Adolf Hitler who played in the Vienna Philharmonic Orchestra, and fraternized with the conductors, and unapologetic Nazi Party members, Herbert von Karajan and Karl Böhm. Some of Bernstein’s notable Jewish friends in the musical world, from the violinist Isaac Stern to the pianist Arthur Rubinstein, shunned these former Nazis.

A further, more personal breach of good demeanor is outlined in unpublished documents in the Library of Congress. Curiously omitted from a published collection of letters to and from Bernstein are revealing missives from 1988, detailing the end of a longstanding friendship between Bernstein and the American Jewish composer David Diamond. Bernstein’s first-ever recording in 1941 was of a piano work by Diamond (1915-2005). In 1956, when Diamond, already a recognized composer, went into debt paying for his mother’s medical expenses, Bernstein found him a job playing violin in the orchestra of his Broadway musical “Candide.” The final break occurred when Bernstein lashed out with a ferocious response to 70th birthday greetings from Diamond. Bernstein was enraged that Diamond had agreed to be interviewed for Peyser’s biography. He wrote to Diamond, claiming to have spent five years preparing the first performance of a symphony by Diamond. The preparation took at most five months, as Diamond reminded him, adding diagnoses of late-era Bernstein that will ring true with anyone who met him in these years:

“I have come into your crowded dressing rooms. Sometimes you saw me, smiled faintly, more often, looked through me as you sipped your scotch, from a distance… Your Fame (sic) had control now.”

Diamond described the Peyser biography to Bernstein as a portrait of “the Lenny who can be an angel and the man who can say and act horrendously… Joan’s book is you with all your halo, your wounds and scars, your meanness even.” Diamond followed this up with another missive in October 1988, ending: “Take care of yourself, Lenny. I don’t want my old friend to end up a bitter, disgruntled Timon-Lear, near-mad, and confusing friends with wrong recollections.” This Shakespearian image of a cross between Timon of Athens and King Lear is overly theatrical. Yet it was truer to life than his wife Felicia’s prognostication, delivered in the 1970s. As cited by their daughter Jamie, when her husband left her for a man, Mrs. Bernstein told him: “You’re going to die a lonely, bitter old queen.” Bernstein would in fact never be solitary, as his entourage always included those who worshiped him uncritically, even if some old friends fell by the wayside. Bernstein’s personal life may not have added up to a Shakespearan tragedy, but it hardly seems to match the deserved fervor of centenary tributes to the musician. The rebbe’s behavior could be compromising, but the best of Bernstein will continue to be in his profoundly Jewish music.