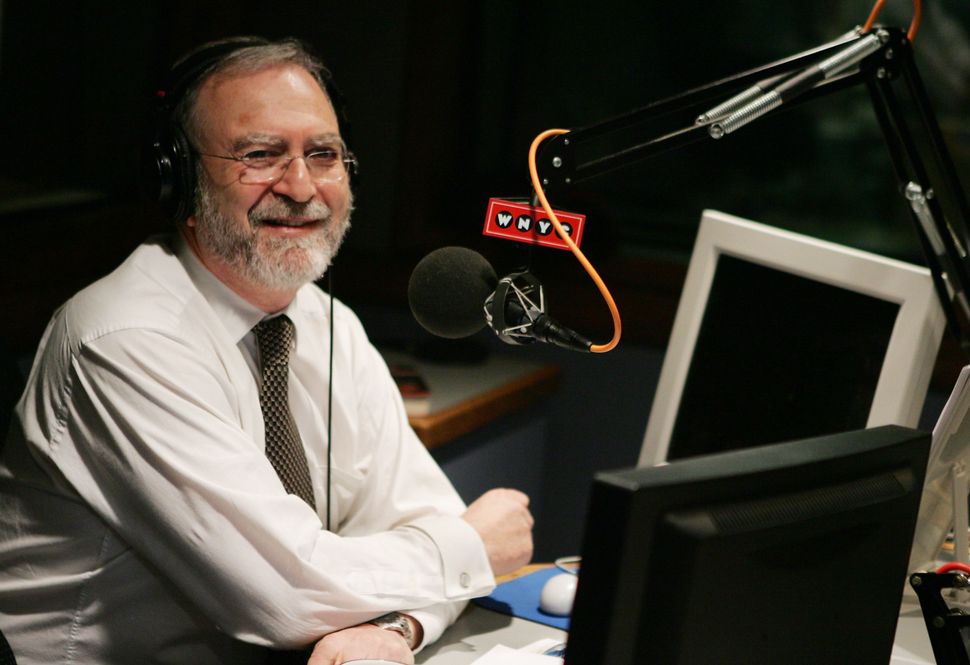 Radio host Leonard Lopate has found a new home—but not all of his neighbors are happy to have him. Lopate, who was suspended and later terminated by WNYC last December after allegations of “inappropriate conduct,” launched his maiden show on the Brooklyn-based station, WBAI on July 16th, 2018 the Columbia Journalism Review reports.

The show, “Lopate At Large,” is an hour-long format and promises to resemble his old two-hour program, “The Leonard Lopate Show.” The first episode did not mention his misconduct.

His new studio is far from glamorous. The Columbia Journalism Review reports, “The station, which is located in a small office in Brooklyn, uses four bath mats tacked to the walls to dampen the sound. A cluster of red Christmas lights serves as the signal for when shows are ‘on-air.’”

In these humble environs, the former giant of radio is likely to stand out, and a number of his new colleagues are coming out to the press as less than welcoming. The Columbia Journalism Review interviewed several producers and hosts who objected to Lopate’s hiring.

“I felt a great sense of betrayal of what my interests are in the #MeToo movement,” Fran Luck told the Columbia Journalism Review. Luck is a producer of a multicultural feminist show on WBAI called “Joy of Resistance.”

WBAI, is a “progressive” station the Journalism Review reports, making their pitch to Lopate to return on their airwaves a bit of a political crossed signal.

The general manager of the station, Berthold Reimers defended Lopate’s hiring on the basis of reaching a larger audience. “You know at WBAI, I don’t think we have 5,000 people listening for the whole week,” he told the Columbia Journalism Review. “Once we have all these people listening to us for him, this is ultimately an easy form of marketing. There should be no question that our numbers go up for all the other shows because of their quality that no one knew about.”

However, Mimi Rosenberg, a producer at WBAI doesn’t see the appeal of Lopate for their core listeners. “I don’t believe for one second our audiences of beleaguered, impoverished, discriminated communities, who we should be representing the voices of, are crying for Mr. Lopate to come on the station,” she told CJR.

Currently producers at WBAI are not paid for their work. Lopate and his producer, who Reimers hopes will bring on more listeners to the struggling station, are being reimbursed.

Reimers noted to CJR that the WBAI and its parent company, the Pacifica Foundation, have a zero tolerance policy for sexual harassment and assault, and that he doesn’t anticipate any problems from the onboarding of Lopate. He also claimed that he’d received several emails from staff supportive of the decision to hire Lopate.

Still, there is a chorus of outspoken critics of the move who, by their nature as radio professionals, have a platform.

Host Yusuf Lamont, on his late-night show, “Creative Unity Collective,” called Lopate’s inclusion “incredibly short-sighted” and “patently destructive to … the mission that is WBAI,” according to CJR.

On Friday July 13th, the DJ Jay Smooth informed listeners to his hip-hop show “The Underground Railroad that he was “vehemently opposed” to the decision.

“If this show is still airing as of Friday, I’m definitely not going back on Friday,” he told the Columbia Journalism Review. “The question for me is, have we gone past the point that I want to go back at all?”

During the airing of Lopate’s show on the 16th, Smooth posted on his Facebook fan page saying “I am ashamed and gutted to say that this return is taking place on my radio home, WBAI. I have called WBAI my home, and family, for almost 30 years. I am sitting here today, listening to this, wondering whether it is still possible for me to say those things.”

PJ Grisar is the culture intern at the Forward