How Renée Taylor, Of ‘The Nanny’ Fame, Gets It Done 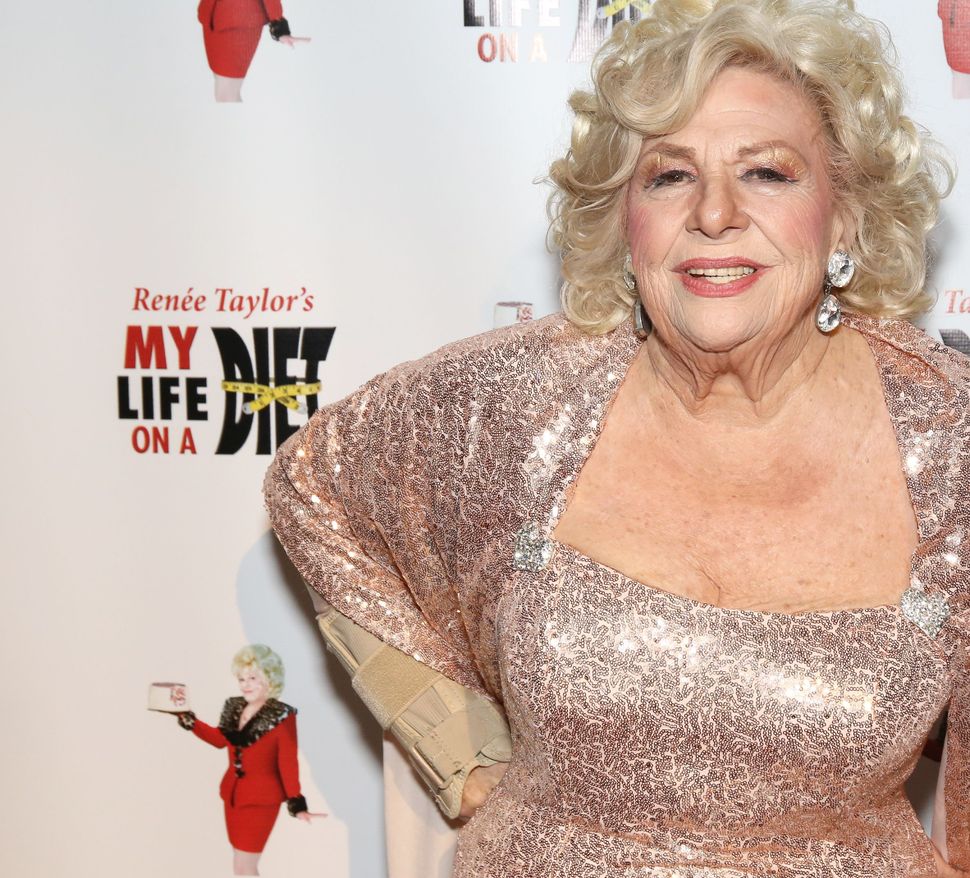 Renée Taylor after a performance of “My Life on a Diet,” July 19, 2018. Image by Walter McBride/Getty Images

Attitudes towards the overweight in general, and women in particular, have evolved — well, sort of. Just ask actress and writer Renée Taylor (“The Nanny,” “Dream On,” “How I Met Your Mother”). As a keen social observer of the cultural scene, not to mention her own weight issues over the past 85 years, she knows something about the topic.

“I’m seeing ingénues and girls in choruses who are heavy and that’s great,” Taylor said recently at P.J. Clarke’s, a Lincoln Center bistro where she was drinking unsweetened tea and eating a hamburger wrapped in lettuce rather than a bun. “Still, many producers want thin and pretty. But they can’t say it. Instead, they’ll say, ‘We’ve decided to move in a different direction.’”

Taylor seemed cheerful, but her tone was deceptive. She’s in mourning for her husband of 53 years, writer, director and actor Joseph Bologna, who died a year ago. It’s been difficult. Still, life goes on. Taylor relocated to New York from Los Angeles, and celebrated her move by launching a run of her one woman show “My Life on a Diet,” which plays off-Broadway at St. Clement’s Church through September 2.

Co-written and directed by Bologna —“who is with me every night,” Taylor said — the show is an entertaining, gossipy and sometimes touching show-biz memoir using Taylor’s diets as its structural lynchpin. (There isn’t one she hasn’t tried.) There was the Vogue champagne diet, involving two glasses of champagne before each meal, and the Last Chance Diet, in which one consumes two ounces of protein three times a day. Taylor is currently on the Oz diet, which involves lots of vegetables and fruits, though she feels free to take a break; dieting is for health now, not beauty. Still, culinary regimens are ever present in her mind.

“I’m a food tramp,” she purs on stage in her marked Bronx accent. “That’s someone who eats around.” Taylor appears on stage bejeweled and sporting a shock of curly platinum blond hair and a glitzy dress. The set is a fussy living room that prominently features faux leopard skin upholster; Taylor sits behind a desk and recounts her life. It all starts in the Bronx with her colorful mom Frieda, who believed there was nothing more wonderful than to be a Hollywood star. And then there was her father, Charles, with his get-rich-quick schemes and gambling debts, packing the family up and driving them off in the middle of the night. The pre-dawn flight ritual was repeated on several occasions, and Taylor frequently found herself the new girl in a new school.

Those setbacks didn’t stop her from pursuing an acting career, starting with endless round of auditions that led nowhere. Yet it was a heady period for young Taylor, who studied with every major acting teacher out there, including Lee Strasberg, Stella Adler and Harold Clurman, and mingled with youthful Lenny Bruce — who was her boyfriend for awhile — Barbra Streisand, Marilyn Monroe and Jerry Lewis. The latter gave Taylor her first film break, playing a small role in “The Errand Boy.”

Stints in Mel Brooks’ “The Producers,” Elaine May’s “A New Leaf” and Neil Simon’s “Last of the Red Hot Lovers” followed. During “My Life on a Diet,” archival videos and slides of the notables and not-so-notables in Taylor’s life are intermittently projected onto a back wall screen.

Taylor is no longer charging about. Indeed, she moves cautiously, onstage and off; she arrived at the restaurant with a walker, accompanied by her publicist, who sat at a nearby table throughout our lunch. Taylor is as devoid of airs or pretensions in person as she is onstage. She could be anyone’s mother or grandmother talking about the high cost of everything, including the $60,000 she and Bologna were asked to dole out for a joint star on the Hollywood Walk of Fame. At that price, she said, they refused.

Taylor is best known for playing Sylvia Fine, the mother of Fran Drescher’s character Fran Fine in the sitcom “The Nanny,” which ran 1993-1999. Taylor largely created her own character — and, as Sylvia, gobbled down all the food in sight.

“And I found that the more I ate the more the audience laughed,” she recalled. “I gained a lot of weight during this period and audiences loved me anyway. I ended up getting an Emmy nomination. It was a learning experience. I had spent a lifetime working to be thin instead of real.”

Not everyone loved Sylvia Fine, an overbearing, intrusive mother viewed as a Jewish stereotype by many people. Even in retrospect. Taylor was stunned when recalling her own Rabbi’s response.

“He said the Jewish community was very angry because I was playing a stereotypic[al] Jew, but I never thought of Sylvia as a stereotype,” Taylor said. “I was just playing my aunt who was crazy and outrageous. Generally, I don’t think about whether a character is a stereotype or not. And, no I never turned down a role because I thought it was offensive to Jews or mature women or women at all.”

Growing up, Taylor and her family were loosely affiliated with a Reform Synagogue, although her mom’s views were notably eclectic. “She believed in Christian Science and had visions of Jesus but she never objected to Joe because he was Catholic but rather because he was Capricorn,” Taylor said. “We had to have our astrological charts done because she was concerned with how a Pisces — that’s me — would get along with a Capricorn.”

Taylor and Bologna got married and re-affirmed their vows on several occasions with clergy of varying faiths, including two rabbis. Taylor has little doubt that her humor is fundamentally Jewish, meaning every joke is an epitaph for a wound.

But she continues to be surprised that her son Gabriel Bologna, the child of comedy writers, is a Holocaust scholar. He wrote and directed a documentary, “Children of Terezin,” about the Theresienstadt concentration camp and is currently helming a theatrical feature on the same topic, she said. He’s also the director of a film in search of distributors, “Tango Shalom,” a farce written by his late dad and centering on the moral crisis faced by a Hasid who needs to raise money for his religious school, and is directed by God to perform a tango, which is forbidden to Hasids, who cannot touch a woman. Madcap chaos ensues.

Bologna and Taylor play roles in the film, making it even more poignant. In some ways it brings her career and life full circle: A post-mortem appearance with Joe in a film created by their son that reflects their shared sensibilities and values.

Looking back, Taylor admits there were dramatic parts she wishes she had tackled, from Gertrude in “Hamlet” to Mary Tyrone in “Long Day’s Journey Into Night.”

“I was told I was the Jewish mother and so I accepted the limitation,” she said. “There are things I could have done. I could have gone to London and studied at the Royal Academy and broadened my range. If I were starting out today I would be more open, honest, grateful and humble. I thought I knew everything when in fact I knew nothing.”

She’s not complaining. She’s had some terrific high points in her career, most pointedly her lifelong collaboration with Bologna on such plays as “Lovers and Other Strangers,” “Made For Each Other,” “Bermuda Avenue Triangle,” “It Had to Be You” and “If you Ever Leave…I’m Going With You.” “Lovers and Other Strangers,” adapted into a film in 1970, earned Taylor and Bologna an Oscar nomination for Best Screenplay Adaptation.

“I loved working with Joe,” Taylor said. “I got to see him all the time, rehearsing with him all day, going to the theater and performing with him at night. Before I’d go on stage I’d put on perfume and flirt with him.”

Asked if her marriage to Bologna protected her from the kind of sexual assaults many actresses are talking about now, Taylor admitted the only times she had that problem was as a young actress in her pre-Bologna period. It’s a subject she’s not given too much thought to in connection with herself, she said, though she’s quick to point out how much she admires the women who have come forth with their stories. After that, short of her “Nanny” gig, she was one half of the Taylor-Bologna duo. “I think people might have been scared of him,” she said after a moment’s deliberation.

When we met two days before ”My Life on a Diet” opened, Taylor’s thoughts were focused on the play, which originated as her 1986 memoir of the same name, and her big-name friends who would be in the opening night audience, including Marlo Thomas, Phil Donahue, Lee Grant, Fran Drescher and Elaine May.

Asked about the challenges of adapting her memoir for the stage, Taylor said they were in keeping the stories relatable and the diets not too gross, adding that one of Bologna’s frequent roles in their collaboration was to rein her in. But, she said, they were both equally committed to authenticity in writing, as well as having their comic acting stem from a real emotional place, often pain.

On the night I saw the show, sniffles and sighs were audible in the audience throughout, but most pointedly at the appearance of the first slide featuring Bologna, which also elicited a round of applause. “Sometimes they also applaud when I describe Joe’s marriage proposal to me,” Taylor said. “They’re with me all the way.”

Maintaining her stamina is Taylor’s most daunting task at the moment. After all she’s doing seven 90-minute performances a week. “You have to be in a Zen state and I arrive at the theater two hours before the show to meditate,” she said. “If the Dalai Lama needs three to four hours a day to meditate than I certainly need those two hours to get centered and get my ego out of the way.”

If she were not a writer-actress, Taylor said, she might be a psychiatrist. She’s always been fascinated with what makes people tick, and has spent 22 years in various forms of psychotherapy. She continues to do “gestalt therapy” — in which people role play to resolve problems — with friends and colleagues, and she and Bologna ran group therapy sessions for married couples in their home intermittently over the years. “When we made ‘Made for Each Other,’ we went to group therapy to make sure we were getting it right in the script, and then we got interested in it for ourselves,” she said.

Taylor is currently writing a play about Bologna and their relationship, tentatively titled “Book of Joe.” She’s also writing another one-woman show for herself about Mae West. When Taylor is not working on theatrical or film projects she lectures here and there, frequently addressing the question of whether comic timing can be taught. “I believe it can,” she said.

She’s got every intention of continuing to work, but points out time is of the essence. “I have 104-year-old friend who is still auditioning,” she said. “When the casting director recently said to her ‘We’ll get back to you’ she said ‘Don’t wait too long.’”

How Renée Taylor, Of ‘The Nanny’ Fame, Gets It Done