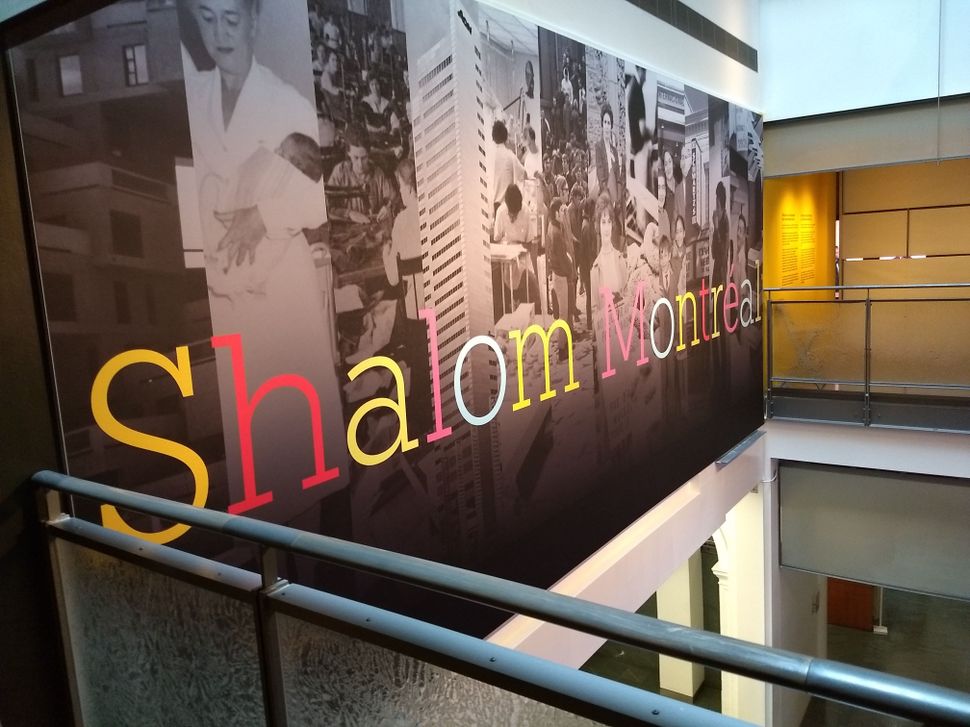 To the outside world, Jewish Montreal’s achievements often get reduced to sound bites and caricatures. But as a new exhibition at downtown Montreal’s McCord Museum makes clear, Jews have had a hand in nearly every aspect of civic, social, cultural and business life in Canada’s second-largest city.

Even the organizers of “Shalom Montreal: Stories and Contributions of the Jewish Community,”which runs through November 11, were “overwhelmed” by what they learned about the community’s contributions, according to the museum’s president and CEO, Suzanne Sauvage, a curator of the show.

“We had to make difficult choices. What do we talk about?” Sauvage told me after I visited the exhibition. “It was amazing — there were so many things I didn’t know, because some didn’t affect me as a French Canadian.”

But the point of this sincere, skillful show is how Jewish accomplishments benefited all Quebecers, not just other Jews. The exhibit digs much deeper than its name implies. The biggest surprise for me is raw honesty about brutal anti-Semitism in 20th-century Quebec, and how anti-immigrant sentiments among French Canadians almost always targeted Jews. “We thought that was essential to talk about it,” Sauvage said. “We wanted to contextualize the Jewish presence so that Montrealers would understand it. Until the 1960s, McGill [University] had quotas on Jewish students. That’s not so long ago.”

The exhibition opens with “Who Are the Jews?” a thumbnail history by the McGill sociology professor Morton Weinfeld, who consulted on the exhibition On a tall video panel, an accordion player makes mournful, minor key music while an adjacent screen features a parade of Montreal Jews who tell their own stories in English and French. The notes and words waft through the galleries to powerful effect.

After a brief section that charts Jewish immigration to Quebec and Montreal after the Russian Revolution and the World Wars, “Shalom Montreal” takes off the gloves, showcasing viciously anti-Jewish cartoons and editorials from the French-language press of the time. An especially ugly cartoon from the 1930s “journal humoristique,” Le Goglu, depicts two Montreal politicians groveling before “the Jews Cohen and Bercovitch” to satisfy “Jewish pride” and win votes; “Quebec Delivered to the Jews,” the headline screams.

The show also reveals the depths of anti-Jewish discrimination in 20th-century Montreal, including quotas at McGill as well as restrictions on home sales in tony Jewish enclaves. A compact section focuses on refugees and their journeys; artifacts borrowed from the Montreal Holocaust Museum include a tablecloth made by girls at a Berlin orphanage after World War II and brought back to Canada by a survivor.

Once it emerges from the darkness of the early 20th century, “Shalom Montreal” kicks into gear. A section called “Building Together” spotlights how Jews literally built Montreal; architects like Moshe Safdie, Max Wolfe Roth and Max Kalman shaped the modern cityscape, while Phyllis Lambert, a scion of Montreal’s Bronfman clan, helped rescue much of downtown Montreal’s significant historic architecture from the wrecking ball during a frenzy of midcentury development.

“Caring Together” illuminates accomplishments of Montreal medical pioneers like Mark Wainberg, the HIV/AIDS researcher who revolutionized the study of pain. Jews also took a leading role in social services; I hadn’t known that the founder of Sun Youth organization, a leading social service agency, was Jewish until I saw his bio here. And, as “Shalom Montreal” reveals, the Jewish General Hospital — where I was born — turned out to be one of the best public relations moves the community could have made, along with an earnest attempt to heal and help more Montrealers.

Near the end are the exhibition’s liveliest segments. “Doing Business Together” spotlights names even non-Canadians will know — Le Chateau, Aldo, Peerless — all of whom have roots here. A highlight for me was a perfectly preserved brown-paper shopping bag from Steinberg’s, Montreal’s first supermarket chain and a huge part of my childhood. The Steinbergs — wealthy and successful — loomed large in the imaginations of immigrant Jewish families like mine.

And yes — Leonard Cohen, Mordecai Richler and bagels do make appearances, along with legendary Montreal eateries like Schwartz’s, Beauty’s and Wilensky’s. Richler’s typewriter is on display, and a section called “Creating Together” also honors lesser-known local literary lights like Regine Robin and Naim Kattan, along with giants like poet Irving Layton.

If anything’s missing from “Shalom Montreal,” it’s context on the 1970s exodus of Jews to Toronto; the ascent of the separatist Parti Quebecois, and anti-Semitism implicit in some of its dogma, caused thousands to flee. The influx — Jews weren’t the only ones to bolt — helped Toronto overtake Montreal as Canada’s de facto capital.

The exhibition closes with a five-panel video installation in which young Montreal Jews opine on Jewishness and their hometown (“They tried to kill us. We won. Let’s eat,” exults Kat Romanow, the Museum of Jewish Montreal’s director of food programming).

“I think it’s a healthy community today,” Sauvage said. “Young Jews seem happy to live here. The insecurity of the 1970s is completely gone. Most of them are completely bilingual. They feel at home. It’s their city.”

“Shalom Montreal: Stories and Contributions of the Jewish Community” runs through November 11 at the McCord Museum.

Michael Kaminer writes about pop culture for the Forward.