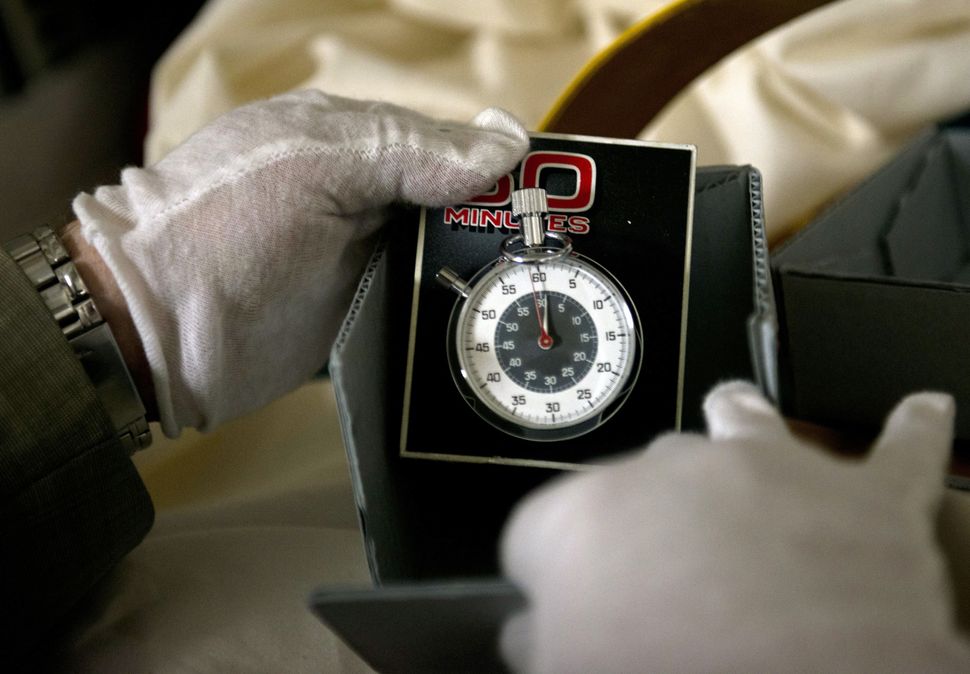 60 Minutes clock at the Smithsonian. Image by Getty Images

As of this month, the influential TV newsmagazine “60 Minutes” has brought investigative journalism, political commentary and celebrity interviews into American living rooms for half a century. If you ever detected something inherently Jewish about the program, its creator and longtime producer, Don Hewitt — whose Russian-born father changed his name from Hurwitz when he immigrated to the United States — once offered an explanation. “I enjoy being a Jew,” Hewitt said. “A questioning one, to be sure, who believes that asking questions is in itself Jewish.”

Since its debut in September 1968, the show’s basic format hasn’t strayed far from its origins. The show still begins with a ticking stopwatch, and the co-hosts still act as producers and reporters of their own segments. The successful, much copied but never equaled formula creates an intimacy with viewers via the simple magic of storytelling with a dash of gravitas.

The first episode of “60 Minutes” was co-hosted by the not-Jewish Harry Truman Reasoner and Myron Leon “Mike” Wallace, who was born 100 years ago in Brookline, Massachusetts, to Russian-Jewish immigrant parents who changed their name from Wallik. Political satirist Art Buchwald, the son of Austrian-Hungarian Jewish immigrants, contributed commentary to the first episode, which also featured a short film by Academy Award-winning moviemaker Saul Bass, born to Eastern European Jewish immigrant parents. Two years later, when Reasoner left to anchor the ABC Evening News, Morley Safer, born to an Austrian-Jewish family in Toronto, joined the program as a co-host and reporter. Safer stayed for 46 years; he died in 2016, one week after announcing his retirement.

One of the first TV newsmagazines, “60 Minutes” did the sort of in-depth investigative journalism that viewers previously could find only in newspapers. Its closest antecedent was Edward R. Murrow’s “See It Now,” which ran for most of the 1950s — Hewitt was its director and producer. Besides Hewitt, Wallace and Safer, other longtime members of the “60 Minutes” crew have included correspondent Bob Simon, a self-described “Jewish kid from the Bronx,” and Lesley Stahl, who became a correspondent in 1991.

Stahl’s grandparents, Esther and Harry Stahl, emigrated from Poland to Boston in 1913. Prior to joining “60 Minutes,” Stahl helped break the Watergate story and served as CBS News White House correspondent during the Carter, Reagan, and George H.W. Bush years. Her stories for “60 Minutes” have ranged from Guantanamo Bay and Google to gospel for teens, earning her a dozen Emmy Awards.

In a 2006 interview with Abigail Pogrebin — a former “60 Minutes” producer and author of “My Jewish Year: 18 Holidays, One Wondering Jew,” which began as a series in the Forward — Hewitt mused about the connection between “60 Minutes” and Judaism. “Making trouble is what Jews like Morley and me do best,” Hewitt said, referring to Safer, who also participated in the live event. Safer, who described himself as “a person of deep faith,” said that “one of the joys of being Jewish is the constant rubbing up, this constant argument, that is really so central to who it is we are.” When asked what differentiated “60 Minutes” reporters from other television journalists, Hewitt — who said he felt a deep connection with the Y.L. Peretz story “Bontshe Shvayg” (“Bontshe the Silent” in English, but Hewitt used the Yiddish) — replied “seykhl,” the Yiddish word for “brains” or “smarts,” particularly of the Jewish kind.

Over the years, “60 Minutes” has covered stories of Jewish interest that have variously led to charges of it being too pro-Israel or too anti-Israel. Hewitt recalled accusations of being a “self-hating Jew,” to which he replied, “I’m a self-loving Jew.” For Pogrebin’s book “Stars of David,” Hewitt recounted a phone call he received after one of the show’s stories on Israel: “She said, ‘I’m getting sick and tired of you people.’ I said, ‘Okay, lady, what now?’ She said, ‘You’re all pro-Israel, and you’re all a bunch of kikes.’ I said, ‘On your first point, you couldn’t be more wrong; on your second point, you could be right.’ And I hung up on her.”

Several times, the program has profiled Israeli conductor Daniel Barenboim and his efforts to bring together Jews and Palestinians through music; it recounted stories of the Italians, French and British who helped rescue Jews from Nazis, and it featured an interview with Mel Brooks discussing his obsession with anti-Semitism.

One of the biggest stains on the reputation of “60 Minutes” was recounted in the film “The Insider,” starring Al Pacino as investigative journalist and producer Lowell Bergman, the son of Eastern European Jewish immigrants. His investigation into fraud and corruption in the tobacco industry — according to the film — met with pushback in the upper echelons of CBS, some of whom allegedly had financial ties to cigarette manufacturers.

In terms of ratings, “60 Minutes” is the most successful program in U.S. television history. It has won a total of 138 Emmy Awards, the most of any prime-time program on TV.

Times have changed, however, and Stahl is currently the only regular Jewish reporter on “60 Minutes.” The clock, however, still ticks with a hint of a Yiddish accent.