This Actor Tackles Jewish Stereotypes — By Performing Them 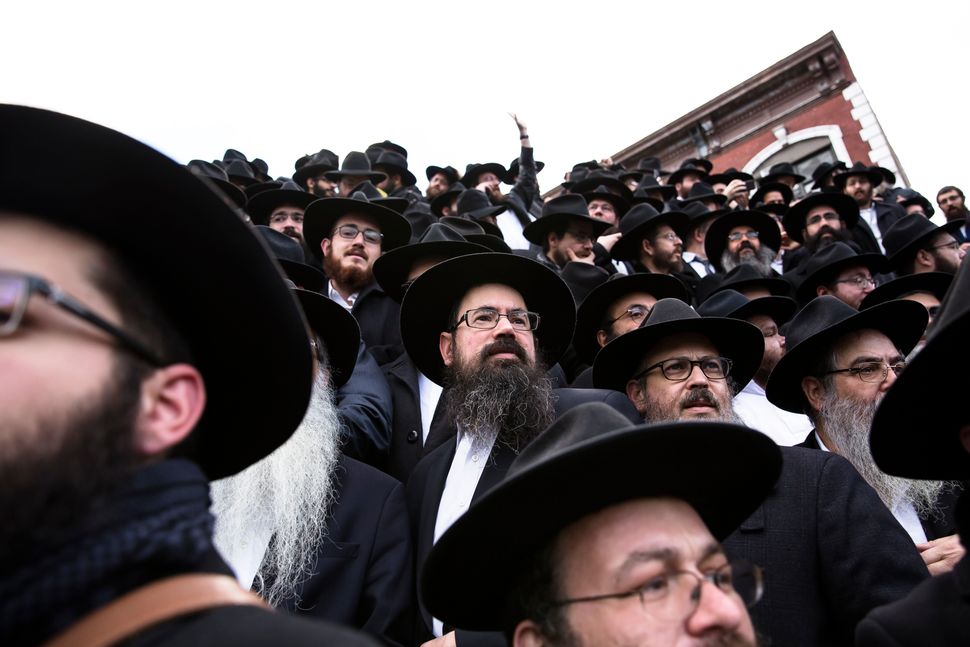 Superstitions are strange things that often produce even stranger talismans. In Poland, one common type of good-luck token comes in unsettling forms: Paintings, magnets and statues of Jewish people, dressed like Shalom Aleichem characters, counting out gold coins. It sounds like a throwback to a darker time, but, much like the mascot of the Cleveland Indians, these troubling tchotchkes have endured into modernity, being sold at many Polish markets. Now, Vice reports, one man is fighting back against this merchandise — by serving as the genuine article.

Michael Rubenfeld, a Canadian theater-maker, first became aware of so-called “Lucky Jew” merchandise while visiting Poland with his wife, who grew up there.

Rubenfeld, who moved to Canada full-time in 2017, told Vice he learned from the journalist and filmmaker Jan Gebert that “Lucky Jews” are a rather commonplace kind of folk art. Though figures of Jews were common as talismans up to the 1800s, they only appear to have become popular as paintings after most Jews had left the country. In 1968, a government-sanctioned anti-Semitic campaign, under the guise of an anti-Zionist movement, expelled around 20,000 Polish Jews, at that time nearly the entire Polish Jewish population. With the real Jews gone, objectionable paintings that depicted generic Jews in Hasidic dress started appearing. (Gebert believes the images emerged to satisfy a subconscious desire to replace the missing Jewish element while other scholars claim they were bought as a political act against a government that refused to teach about Jews or the Holoaust.)

Either way, the images quietly became part of Poland’s culture. It was only in the 1970s, when the country was weary of communism’s effect on the economy, that coins became a standard element of “Lucky Jew” memorabilia, expressing what Gebert believes was a yearning among poor Poles for wealth and a capitalist system.

“I actually saw [the paintings] for the first time in the main square in Kraków, which is the most popular part of the city,” Rubenfeld told Vice “I was shocked that something perpetuating such a problematic stereotype was being sold in such a popular destination. It was just so wrong that I loved it, and I immediately bought one for each of my Jewish friends back in Canada.”

Rubenfeld knows his perverse delight in the offensive images may strike some as odd, but he found the caricatures so extreme and yet so pedestrian that he believed the best response was to amplify their absurdity.

Rubenfeld worked with FestivALT, a Jewish arts collective based in Krakow, to produce a performance art piece around the “Lucky Jews” that debuted in the summer of 2017. In the performance, Rubenfeld goes out to various Polish marketplaces, dressed in a vest and flat cap with a luxuriant beard, and sells paintings of himself, complete with a menorah and Hebrew texts, to the Polish population.

“I sit at a table behind a large frame. In front of me are the same items as in the pictures: A feather pen and ink blot, a book, a sack of money and additional coins on the table,” Rubenfeld told Vice. “And so the public encounters the same image twice; me in real-life and me in the pictures.”

The double vision is meant to engage the consumer, Rubenfeld said, by making the transaction more confrontational. By adding a dose of the surreal, Rubenfeld hopes to challenge the harm of the tradition.

But is it working? It seems to depend on the audience.

“Many people took pictures. I believe that many understood the irony of the performance,” Rubenfeld said of his first outing with his booth, at Emaus, a popular Easter market in Krakow. Yet his collaborator, Jason Francisco, thinks the act needs work. “Jason believes that the legibility of the irony is one of the things we don’t yet sufficiently understand as performers,” Rubenfeld said. “We’re trying to work out whether people getting it is as useful as people not getting it.”

The second time Rubenfeld hit the town in the role of the “Lucky Jew,” at an outdoor flea market called Hala Targowa, he was met with a more nuanced reaction. “We had more experiences where Poles were critical of what we were doing,” he told Vice. “To me those debates happening in public and being witnessed by others was one of the most successful parts of the project.” By encouraging discourse, Rubenfeld hopes he’s bringing attention to the attitudes of Poles towards Jews, and vice versa.

Still, for every meaningful dialogue about the ethics of Rubenfeld’s display, he said, an unsettling number of customers are inured to it.

“For every interaction or sale we made, there was always actually much more indifference to our presence — as if we were simply a normal stall selling normal things,” Rubenfeld told Vice. “This is perhaps the most interesting, if not problematic response of all; that what we are doing can be so quickly normalised [sic] in the context of public space. It’s my hope that one day we’ll be banned or kicked out of these markets for being inappropriate. But until then we’ll keep selling.”

This Actor Tackles Jewish Stereotypes — By Performing Them