Chicago’s Jewish History, In One Synagogue 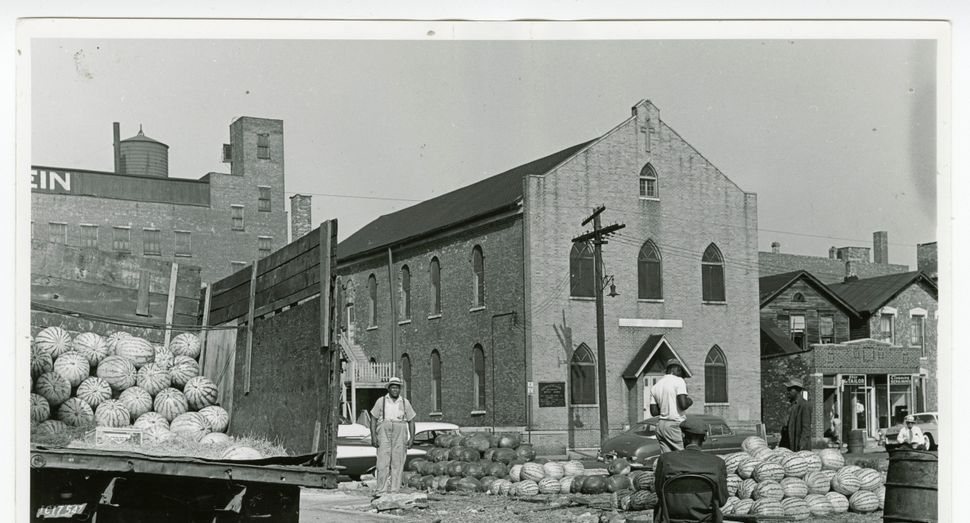 Chi-town? More like Chai-town. On August 23, Chicago’s WBEZ 91.5 devoted an episode of their program “Curious City” to the history of Jews in the Windy City.

The program began with a question from listener Elias Saltz: “Where were the largest Jewish neighborhoods in Chicago, and what were they like and where did they go?”

In a 15-minute segment, Marck interviewed the 95-year-old author and historian Dr. Irving Cutler, whom he introduced as the “Dean of Jewish Chicago Research.” By tracking the movement of one Orthodox synagogue, Congregation K.I.N.S. (Kehillat Israel Nusach Sefard), Marck and Cutler give an interesting primer on Chicago Jewish history beginning with the arrival of Eastern European Jews in the 1880s on Maxwell Street, where K.I.N.S. started, and ending in the present with the eruvs around West Rogers Park, where K.I.N.S. has been located since the mid-1950s. While Marck claims there is an Orthodox renaissance — complete with a “uniform” of men in kippot and women in sheitels — now percolating in the area around the far north neighborhood of Rogers Park, Cutler reports that early Jewish immigrants first made their mark on the city when they moved into the tenements of the Near West Side’s Maxwell Street.

“They built the Chicago Hebrew Institute, a community center, sort of a manual-training school,” Cutler said of the Eastern European Jews who rented housing on Maxwell Street in the late 19th century, “and they built these 40 synagogues here. With one exception on the fringe, which was reform, the others were all Orthodox… most of them were very small, many of them were in a rabbi’s house.”

By the 1920s and ‘30s Maxwell Street, once the main thoroughfare of Chicago’s Jewish population, was largely abandoned in favor of the less-cramped quarters of the North Lawndale neighborhood. In its heyday North Lawndale, known colloquially as the GVS or “Greate Vest Side,” boasted scores of Jewish shops and entertainment centers the locus of which was the Jewish People’s Institute (JPI). Somewhat like a YMCA, the JPI had gyms, pools, classes and even hosted rooftop music in the summer; Cutler called the al fresco concerts “the original JDate.”

The most interesting part of the broadcast followed Cutler and Marck into the former site of the K.I.N.S. in North Lawndale, now the Greater Galilee Baptist Church, where they spoke to Sister Mary Coleman, a black parishioner who hints at the parallel tracks of Jews and African Americans in Chicago. Greater Galilee moved to its North Lawndale location, which still boasts many intact Magen Davids, from the once-Jewish Maxwell Street in the late 1950s. In the middle part of that same decade most of the Jews who resided in the “Greate Veste Side” left for the suburbs, while those who remained in the city made West Rogers Park, where K.I.N.S. now stands, their home.

Accompanying the audio on the WBEZ website is an interactive synagogue map of Chicago complete with Cutler’s annotations. For those who can’t make it out for one of Cutler’s tours of the city — Marck reports he’s led thousands — the map is the next best thing. Unfortunately, it doesn’t have any tips for finding a kosher Chicago-style hotdog with the works.

Chicago’s Jewish History, In One Synagogue