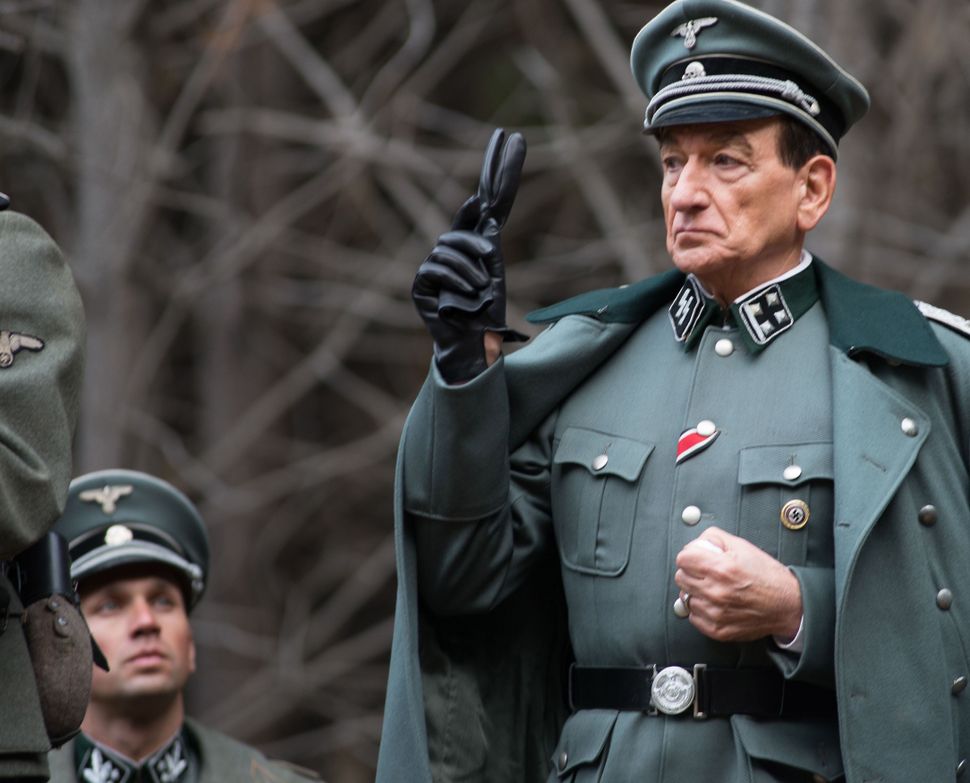 In a telling scene in “Operation Finale” — the new blockbuster dramatization of Israel’s 1960 capture of Nazi architect of the Final Solution Adolf Eichmann — Mossad operatives are in a bar, drinking, smoking and looking somber. The group has a resident hothead, a staple of the espionage genre, who insists that each team member share how many loved ones they lost in the Holocaust. Some tire of the macabre icebreaker; voices and tensions rise. Then comes an order to stand for the prime minister, and one agent stage-whispers to another: “It’s Ben-Gurion!”

Should you have retained any hope that “Operation Finale” would be insightful, that heavy-handed gimmick will likely rid you of it. Is it possible to imagine, say, a squad of World War II British spies greeting the Prime Minister with a gleeful hiss of “It’s Churchill?”

Yet the moment, for all its ludicrousness, is revealing. It serves as a concise thesis for the film, which uses the remembered ravages of the Holocaust to highlight and celebrate the flatly inspirational promise of Israel’s future. But in doing so, it uses the Holocaust to foreclose on the very moral questions it raises.

From the moment in April, 1960 when Ben-Gurion announced his capture to the Knesset, Eichmann’s fate has been bound up in the most intimate questions about how Jews should move forward after the Holocaust. Having escaped to Argentina once Germany’s defeat in World War II became assured, Eichmann lived there with his family under the assumed identity of Ricardo Clement until Israeli officials were tipped off to his presence there in 1960. Mossad operatives subsequently kidnapped him and removed him to Israel to stand trial. That trial was the first time that Holocaust survivors gave public testimony about their experiences. Broadcast on television in its entirety around the world, it radically changed the way that Israel, and the world, understood the crimes of the Nazis.

Yet some of Israel’s most prominent Jewish thinkers objected to Eichmann’s execution, the second and so far final instance of official capital punishment in Israel’s history.

There were also those who objected to his capture and trial in the first place. In “Eichmann in Jerusalem,” her famously controversial report on Eichmann’s trial, Hannah Arendt critiqued the proceedings for being a “show trial,” writing “If he had not been found guilty before he appeared in Jerusalem, guilty beyond any reasonable doubt, the Israelis would never have dared, or wanted, to kidnap him in formal violation of Argentine law.”

The philosopher Isaiah Berlin also believed the trial was a political construction, posing a question to then-Jerusalem mayor Teddy Kollek: Was the trial’s purpose “to remind the Jews that they are one and that they are in danger in the Diaspora?” If so, he wrote, it wouldn’t work: “They either know or don’t know this; and this won’t convert anyone.”

The message of “Operation Finale,” directed by Chris Weitz and starring Ben Kingsley as Eichmann and Oscar Isaac as the Mossad’s Peter Malkin, is precisely the opposite of that which Berlin feared. Rather than remind Jews that they live in the shadow of a common danger, the film pushes its audience to see Jews as sharing a common, deeply-ingrained pride, one inextricably tied to the belief that to be Jewish — or, more broadly, to have been unjustly persecuted — is to occupy a perpetual moral high ground.

Eichmann’s capture was, as Arendt and Berlin argued, far from a morally unquestionable achievement, but it must be posed as such for the film to work in the good-versus-evil mold of a traditional spy flick. Thus, the Holocaust becomes a tool by which to justify a morally problematic endeavor, making Eichmann’s kidnapping appear to be an absolute moral mandate.

That’s hardly surprising. “Operation Finale” is an American movie, and as such, fits a certain mold. It’s a story about powerful people being heroes, rather than one about profound, traumatic and unresolved moral struggles.

And it uses the traumas of the Holocaust, as in the scene prior to Ben-Gurion’s entrance, to distract from the morally complicated nature of the task at hand.

See: Joe Alwyn as Eichmann’s son, Klaus, who becomes increasingly radical in his Nazi beliefs over the course of the film, pursuing his father’s captors with a racialized zeal unmarred by any acknowledgement of his father’s crimes.

See: The moment when Isaac’s Malkin, leaving Eichmann’s trial, encounters the apparition of his sister Fruma, whom the Nazis killed. When Fruma appears earlier in the film, she is either facing death, dead, or looking with a quiet determination — not quite accusation, but close — at Malkin, in his imagination. Now, she kisses his cheek, then peacefully disappears. Per the film, he has fulfilled the mission that her death, alongside six million others, unquestionably mandated.

Yet the most telling choice in the film is that the one Jewish character who betrays the mission — a teenage Argentinian Jewish girl who, discontent at going unpaid for her work, steals necessary funds from the Mossad agents — is rewarded for putting her self-interest above that of the mission by being tortured by Nazis. A teenage girl was, in fact, kidnapped and brutally tortured by Nazis in Argentina in an instance tied to Eichmann, but it was in vengeance for his execution, not an unexpected result of affiliation with his illicit extradition.

Weitz acknowledges that event was moved forward in the film’s timeline, telling the Smithsonian that the choice was made for the sake of suspense. The change is suspenseful, sure, but also insidious. A Jew who betrays the dictates issued by the authorities of their people will be punished, it says. And not only that: A Jew who puts self above people fulfills the very stereotypes — of, for instance, avariciousness — that inflamed the Nazi genocide.

In those choices, “Operation Finale” insists on imposing the absolute lack of moral nuance present in the atrocious fact of the Holocaust on the rest of history. Yet the facts of the Holocaust, the incremental level on which it unfolded day by day, were rife with moral nuance. We celebrate the righteous among nations, the non-Jews who risked their lives to save ours; we condemn those who, like Eichmann, protested that they only committed the horrendous crimes they did because they were following orders. Arendt herself was excoriated for pointing out that Jews at times assisted the Nazis in their genocide.

Both the fact and the facts are true, but they suggest diametrically opposed visions of what the Holocaust should mean for the Jewish future. The fact: The Jewish people suffered the most grievous of moral wrongs, and are therefore broadly justified in seeking moral recompense. The facts: As Berlin and Arendt cautioned, morality is a treacherous landscape, one in which it is a mistake to assume one’s own instincts to be right. Interpreting the history of that era, and the history that era spawned, we can choose to go by the fact or the facts, not by both.

The true tragedy of “Operation Finale” is that it chooses the fact. It strains for more complexity, true, opening on the mistaken paralegal execution of a man thought to be Eichmann and tracking the effects of that error on Malkin as he goes after the true criminal. But it never questions why Malkin and his peers believe their quest to be just. It goes to every length to show that quest to be impeccably so.

That’s a persuasive myth. And it’s only part of the story.