‘Oslo Diaries’ Tells Tragic Story Of What Might Have Been 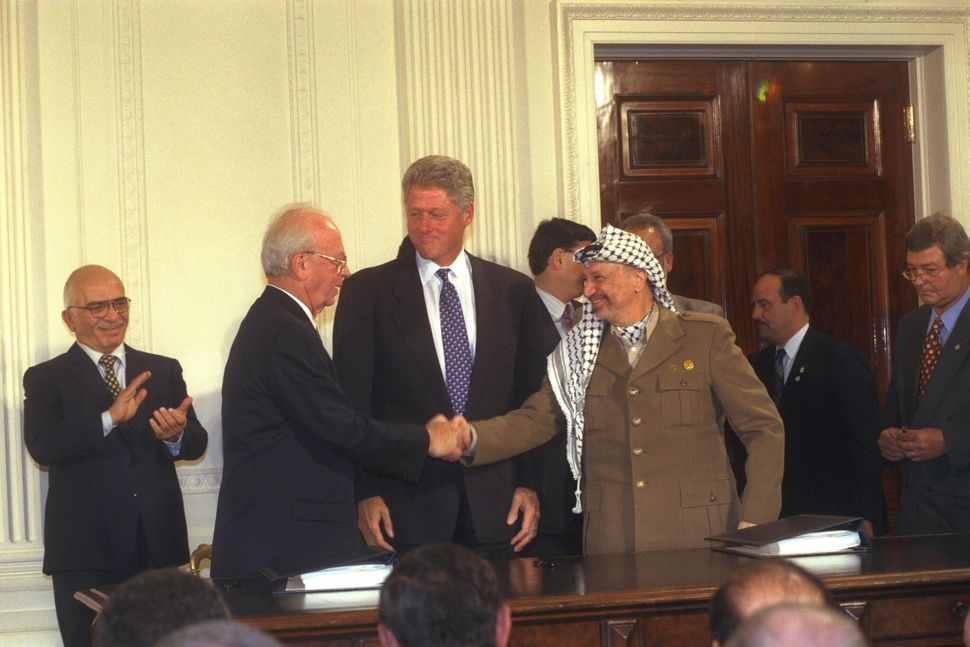 “The Oslo Diaries,” an HBO documentary that will debut on September 13, is a heartbreaking retelling of the events surrounding the making and breaking of the Oslo Accords. The documentary, which reflects on the Accords for the 25th anniversary of the signing of the initial agreement, makes effective use of archival footage, material from previously unpublished diaries and new interviews with participants, including the late Shimon Peres, to tell a very sad story.

The peace negotiations were conducted under a shroud of secrecy. Much of the subsequent news coverage was limited to the signing ceremony on the White House lawn — remembered largely for Yitzhak Rabin’s deer-caught-in-the-headlights look when PLO chair Yasser Arafat reached out to shake hands — and to the Nobel Committee’s premature Peace Award to the two and Peres.

The documentary is most significant in that it questions the widely-held assumption that the PLO never missed an opportunity to miss an opportunity. As it tells the story, blame seems to lie as firmly on the Israeli side of the border as in Gaza or the West Bank.

Daniel Sivan, who co-directed the film with his partner in life and work, Mor Loushy, told the Forward that the pair decided that there were enough Israeli films about the army and war, “but there was nothing about the peace process.”

Calling from Los Angeles, Sivan went on to explain that, nevertheless, he and Loushy were reluctant to take on this project. “There is nothing photogenic about a peace process,” he said. “[It’s fun] to see people shooting and explosions. No one wants to see a bunch of grown up men sitting around the table.”

Sivan and Loushy, both sabras, also understood that, as Sivan told me, “the peace process is our soft spot. It’s meant so much hope and so much misery and heartbreak. For the Palestinians, the peace process [ended up as] an elongation of the occupation.”

What convinced the filmmakers to pursue the project was their discovery of the diary of Ron Pundak, an assistant professor of economics at the University of Haifa and one of the first two Israeli negotiators involved in the crafting of the accords. “It revealed his personal journey, his huge risk taking in Oslo,” Sivan said, and a sense of the “whole tragedy.”

“The Oslo Diaries” begins in the offices of Yossi Beilin, Israel’s deputy foreign minister, who asked Pundak and Yair Hirschfeld, a senior economics professor at the same university, to travel to Oslo for the secret negotiations.

Not even Beilin’s boss, Peres, was aware of what was going on. If discovered, the two profs faced the risk of being disowned. Any contact with the PLO was strictly forbidden by government decree.

In Oslo, the pair met with three representatives of the PLO. The delegation was led by the group’s finance minister Ahmed Qurie, also known as Abu Ala.

It seemed an opportune time to discuss peace. The PLO was in a quandary. It had been kicked out of Jordan, relegated to Tunis and was rapidly running out of funds, so an agreement could save it. Meanwhile, many Israelis were tired of the bloodshed.

The meetings began during the cold Oslo winter of 1992-93. The frost extended inside as well — at first. But soon, as the delegates got to know each other, warmth and trust began to grow.

That spring, Qurie insisted that Israeli government officials become involved in the talks, meaning that Beilin had to involve Peres. With Peres’s approval, Beilin sent Uri Savir, the foreign ministry’s director general, and Joel Singer, a Washington, D.C.-based, Israeli-born legal advisor to the ministry, to Oslo.

Ultimately, the two sides hammered out a Declaration of Principles (DOP) that set up a timetable for the Middle East peace process and established an interim government in Gaza and Jericho. More importantly, for the first time, the PLO recognized the legitimacy of the State of Israel. In return, Israel recognized the PLO as the sole representative of the Palestinian people.

For a minute, it seemed anything was possible. “The Oslo Diaries” is so involving and well constructed that it’s difficult not to get caught up with a sense of hope — even though you know the ending.

From the start, Israel’s then-opposition leader Benjamin Netanyahu railed against the agreement. There was little he could do politically but create and feed on divisiveness. That was apparently sufficient. After a brief period of euphoria on both sides of the borders, Baruch Goldstein walked into the Muslim prayer hall at the Cave of the Patriarchs and murdered 29 worshippers and wounded 125 more. It’s impossible to trace a direct connection between Netanyahu’s inflammatory rhetoric and Goldstein’s actions, but it’s also impossible not to notice.

Subsequent rioting by Palestinians and the tough response of IDF troops set firm battle lines. Even though both Israeli and PLO leadership continued to negotiate, in what was known as Oslo II, peace wasn’t to be.

Netanyahu continued to stoke violence. The documentary shows him standing silently at the podium of a massive outdoor celebration as crowds yell “death to Rabin” and saying nothing to disavow violence.

In November 1995, at the end of rally for peace, Rabin was assassinated by a right wing ultranationalist opposed to the Accords. A few months later, a Palestinian suicide bomber boarded a bus in Jerusalem and killed 26 Israelis. Thereafter, Seven months later, Netanyahu was elected Prime Minister in a narriow victory over Peres.

Sivan told me about a conversation he had with Beilin that wasn’t included in the film. Beilin told him that there were two things that worried him and other Israeli politicians: That Palestinians “were barbarians” and that a radical would kill Arafat, and whoever replaced him would denounce the agreement.

“The biggest irony,” Beilin said, “is that it was Rabin who was killed by Jews and an Israeli who said I’m not going to honor this deal. You see the flaws in your enemy and not in yourself.”

I have one quibble with this otherwise outstanding documentary: It doesn’t give due attention to the Norwegians who set the negotiations in motion, a focus of the Tony-Award-winning play “Oslo.” A social scientist and member of Norway’s foreign office pushed for the initial meetings, which should somehow have been acknowledged.

I raised that issue with Sivan, who said it was simply an artistic decision. “This is not a criticism for me,” he said. “We felt the drama was with the two peoples, the Israelis and the Palestinians, and weren’t interested in the Norwegian perspective.”

After the filmmaking process, Sivan believes that the current state of affairs can’t continue and that an agreement is inevitable. The only question, he says, is how many more people on both sides will die first.

‘Oslo Diaries’ Tells Tragic Story Of What Might Have Been