How I Grew Up With ‘Fiddler On The Roof’ 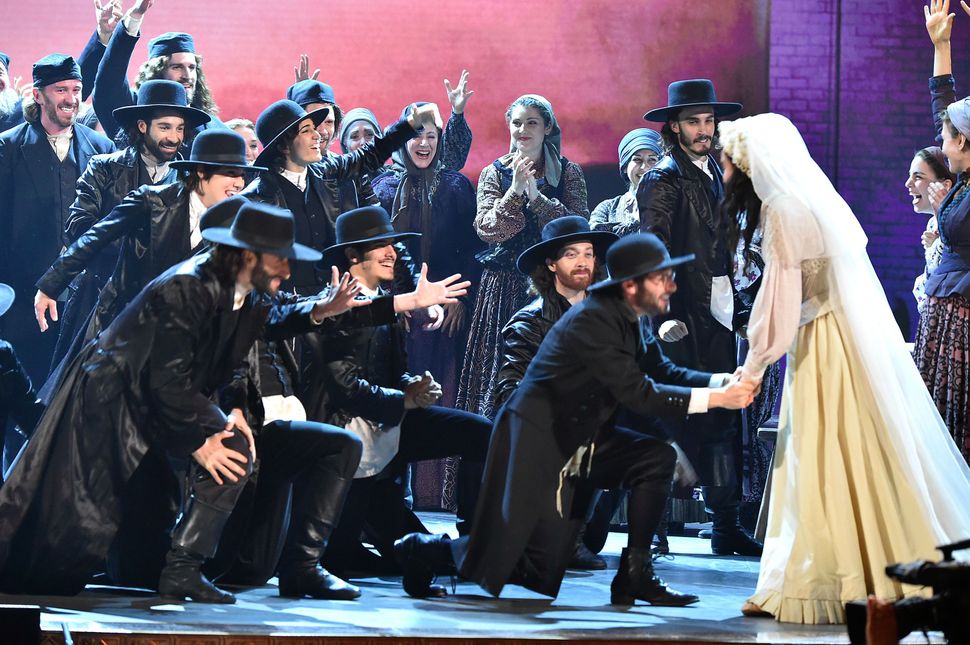 The cast of “Fiddler on the Roof” performing at the 2016 Tony Awards ceremony. Image by Getty Images

“They’re doing ‘Fiddler’ in Yiddish,” a friend recently told my husband and me. “You both speak it, right?”

“Only what I picked up from my parents,” I said.

“Household Yiddish,” Martin joked. “We know the words for complaining.”

“There are subtitles,” she said, offering to get tickets for us to join her and her husband. This promised to be amateurish compared to the lavish Broadway productions I’d seen, but we agreed to go. I first saw the show when I was 23 and balcony seats were $5.75. I wanted to treat my parents. They’d sacrificed to provide for my brothers, fraternal twins, eight years older than I was, and me. The hours my father worked ruled out theater going so only my mother went with me.

Before moving to the States in 1949, my Russian-born parents lived in Winnipeg. My father, who had a small store, satisfied his passion for the Yiddish theater by bringing in performers from New York’s Second Avenue and producing shows for the sizable Jewish community. When the petite actress Molly Picon came to dinner, she was flattered to see her picture hanging on our dining room wall. She had no idea it just replaced an 8 by 10 of comedy actor Menasha Skulnik.

There was an exciting buzz in front of the Imperial Theater, but soon after the curtain went up, I grew uneasy. The parents on stage were too familiar. Tevye, the milkman, reminded me of my father, the owner of several New Jersey supermarkets. Defined by Yiddishkeit, davening was their only aerobic activity. Both looked undressed without their taleisim. I was outraged that the daughter who loved Motel the tailor was being matched up with a 60 year-old butcher. Identifying with the one who married a goy, I almost exploded when Tevye sat shiva.

I was reliving my teen years, recalling the constant reminder that I was to marry “a nice Jewish boy.” In my high school the popular kids were mostly gentiles. Eager for their acceptance, I was embarrassed by our kosher home. The prom queens and cool guys didn’t eat beef fry, herring or borscht. Agonizing, I regretted coming to the show, resenting my schmaltzy heritage.

Leaving the theater, a saying came to mind: “You can take the person out of the shtetl, but you can’t take the shtetl out of the person.” I avoided making eye contact with my mother. Soon after that, I moved to Los Angeles.

26 years later, Martin and I, a scriptwriting team in Hollywood, were in New York visiting his family. He suggested we take our son to the revival of “Fiddler” with Chaim Topol. I was concerned that a 7-year-old fan of “Superman” and “Ghostbusters” might not relate to a musical about Jews in pre-revolutionary Russia. “Nicky likes The Beatles, not Moishe Oysher,” I pointed out. Martin waved it off and splurged on seats that cost close to $40 apiece.

The parents in this production were sympathetic. I understood the need for a matchmaker. Girls couldn’t become wage earners and needed men to provide for them. The village had no Sigmund the therapist so Tevye grappled with his problems by talking to himself and to God. Shocked that his second daughter had the chutzpah to marry a man she loved, her father resolved his ambivalence with a brief monologue: “Did Adam and Eve have a matchmaker? …Well, yes, they did. And it seems these two have the same matchmaker.”

Glancing at Martin and Nicky, I teared up during “Sunrise, Sunset.” I was still amazed that at 38, I had married a man I adored who made me laugh. Equally unlikely, we overcame fertility problems and had a son who exceeded our expectations. My gratitude was expressed in the lyrics of “Now I Have Everything”: “I have something that I would die for, someone that I can live for too. Yes, now I have everything, not only everything, I have a little bit more.” In addition to sharing my life with these two extraordinary guys, I was one of the few women writing for television, doing scripts for “The Mary Tyler Moore Show,” “Maude” and Lily Tomlin.

As the three of us headed out of the Gershwin Theater, I reflected on how dramatically things had changed for in the last century. The only thing Martin and I had in common with Tevye and Golda was our devotion to our children. But we were progressive parents, respecting our son’s desires. Suddenly I worried that could backfire. We’d planned on him having a Bar Mitzvah. What if he refused? I felt a tug on my sleeve. “Mom, can we see it again?”

“No, sweetie, theater tickets are expensive,” I explained. My son didn’t squawk. He knew if I turned down a request, there was a valid reason. I silently congratulated myself on finding the right balance between permissiveness and discipline.

The next day, Martin’s mother said, “I got tickets for ‘Fiddler.’ “Nicky wants to see it again.”

Then my brother Jack called. “Tell Nicky we’re going to ‘Fiddler’ on Sunday.”

Though close to three decades had passed since we’d seen the revival, I recalled it vividly. Martin and I, who’d been living in New York since Nick (he’d dropped the “y”) was 8, were remarking that the stage at the Museum of Jewish Heritage was bare except for tan sheets hiding the small orchestra behind it. Actors named Cameron, Samantha and Jodi would be portraying Fyedke, Beylke and Frume-Sore. This promised to be as unsatisfying as beef fry had been when I was craving the bacon I’d had at friends’ homes.

Cell phones were silenced and Tevye walked onto the stage. Thin and handsome, he could have been someone you’d see on the jogging path or in a fusion restaurant. He also looked too young. Then again, I was now older than anyone in Anatevka, including 60 year-old Lazar Wolf, the butcher. In seconds, the Yiddish returned me to my childhood home. I wasn’t watching a play. I was living it, reconnecting with the family members I’d lost over the last decades, crying the entire time. If only my parents could be here. They’d lived to see me have a career, husband and baby. But they didn’t get to kvell at their eynikel’s Bar Mitzvah, graduations or induction into The New York State Bar Association.

This turned out to be my favorite of the productions I’d seen. The changes in the play were certainly responsible, but so were the changes in me. I’d grown to love being Jewish, and had yet more to appreciate as I listened to Itst Hob Ikh Di Gantse Velt (Now I Have Everything). Along with seeing my son mature into an incredible mensch, I’d gained a daughter-in-law. How thrilling it had been to see them exchange vows under a chuppah with Martin officiating. Maybe because Nick married a Parisian woman, I was asked, “Is she Jewish?” Hearing she was, the question that followed was, “Do you like her?”

“No,” I’d answer. “I love her. She’s exactly whom I would have picked if we were that kind of family.”

The first song played was “Sunrise, Sunset.” It was my request.

Sybil Adelman Sage is a comedy writer and artist. You can find examples of her mosaic art here and her personalized urns here.

How I Grew Up With ‘Fiddler On The Roof’