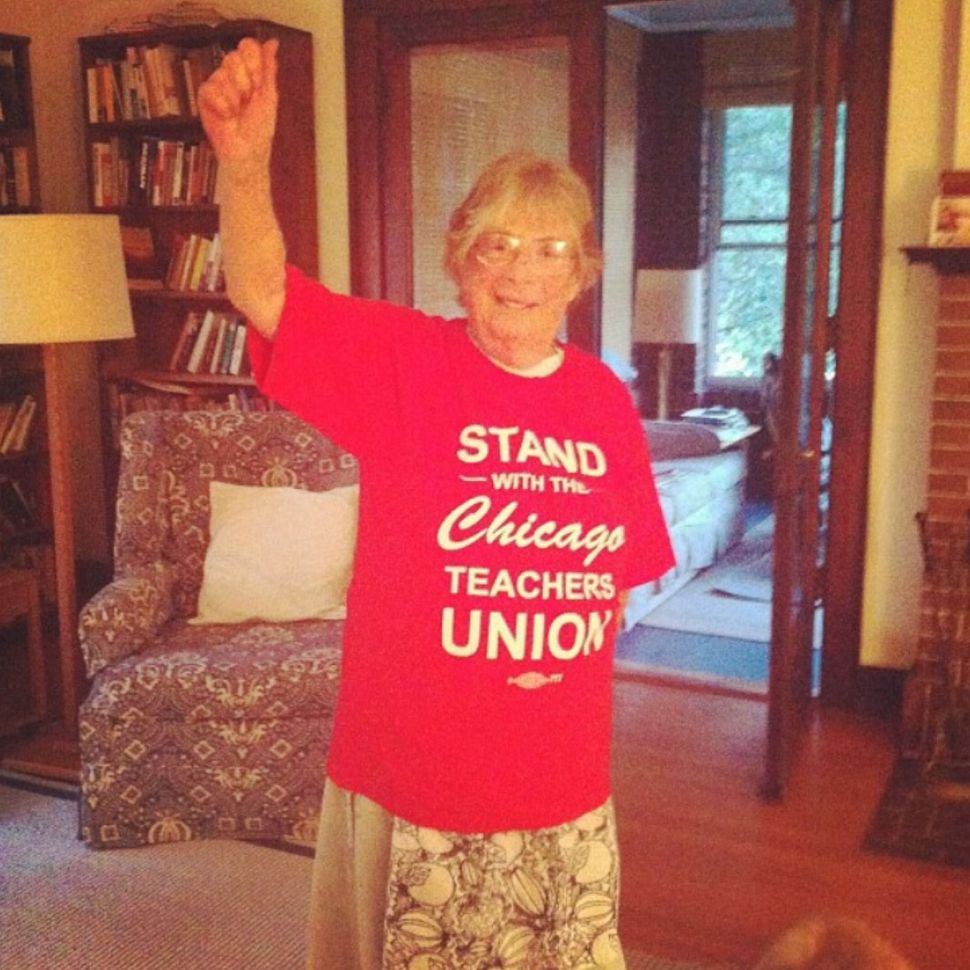 My grandma was what I like to call O.G (original gangsta) union thug. Doris “Heavy D” Joravsky was a Chicago Public School teacher for thirty years. She taught in schools all over the city from Burr Elementary in a pre-gentrified Bucktown to George Armstrong Elementary in Rogers Park. She was a straight-shooter, who was dedicated to her students, and “ride or die” when it came to the Chicago Teachers Union. As her school’s union delegate, she led her fellow teachers on nine strikes between 1969 and 1987. During that time, none of her peers ever crossed the picket line. “Heavy D” didn’t play.

On Wednesday, June 27th, the Supreme Court issued its Janus ruling, asserting in the name of free speech, that public-sector employees who don’t join their union aren’t required to pay fees that cover the cost of collective bargaining, despite the fact that the union at their workplace must represent them either way. As I watch unions across the country struggle to figure out how to maintain their members, I can’t help but wonder what my grandma would have to say.

Unfortunately, I’ll never know her exact thoughts on Janus because she passed away this past January at the age of 90. However, I think her sentiment would have been something along the lines of: “Rachie, I hate those f—king Republicans,” followed by “you want another hot dog?” Feeding her granddaughters Hebrew Nationals smothered in spicy brown Mr. Mustard (never ketchup, that was “goy”) was something my grandma believed in almost as much as public education.

I’m certain the Janus ruling would have left Doris Joravsky reeling. She was a Roosevelt Democrat of humble beginnings, a first-generation Depression baby, the child of Eastern European Jews. She grew up poor in a small apartment in South Philly with her mother and older sister. Her father died when she was young, and she famously shared a bed with her mother until she moved out and got married at the age of twenty. Public education was my grandma’s ticket to the middle class, and she relied on the strength of her union to keep her there.

While I never got to experience my grandma inside a classroom, I’d hear her thrilling tales of teaching every Saturday when my dad brought me and my sister up to Evanston for an epic lunch that included everything from last night’s spinach quesadilla to last week’s gefilte fish. My grandma had a real eclectic, Depression-era fridge, in which you would often find a single apple wedge wrapped in plastic. NOTHING got wasted. It was here, over this thrifty buffet of leftovers, that I got to know Mrs. Joravsky the teacher.

She told me the famous story of Eve Shapiro, a third grader from Rhode Island who once said, “Mrs. Joravsky, my family doesn’t have TV. See, we Jews have always suffered,” a punchline that was able to send my grandma roaring even 40 years later.

While warming up a cold piece of barbecued chicken, my grandma might break out into an aggressively tone-deaf rendition of “Solidarity Forever.” I’d watch and smile and try my best to finish my hot dog, knowing an empty plate always impressed her.

Later, after lunch my grandma would take me into the living room, and sit in her chair, the one adorned with the cross-stitched “Grandma Knows Best” pillow. There, I’d practice reading from one of her old textbooks, while she listened and encouraged me.

My grandma’s last year teaching was in 1992, a year after I was born. My dad went to visit her classroom on the last day of school. He was struck by her relationship with the kids. Here was this tough Jewish woman from Philly, who’d come from nothing, using saucy yiddishisms in a predominantly black and latino class. “Shut it or I’ll give ya a good zetz,” she playfully shouted, leaving the kids laughing and somehow refocused all in the same breath. She was so present, so hands on. This 64-year-old Jewish woman in a long khaki skirt even jumped rope in the schoolyard with the girls. At the end of the day, every last one of her students hugged her goodbye for the summer.

For Doris Joravsky teaching wasn’t missionary work. She and her colleagues were educated professionals, whose skilled labor deserved proper compensation. A middle class compensation, that is now, thanks to Janus, at risk. The Supreme Court’s ruling struck a blow not only to unions but to my grandma’s very legacy. Like many Jews of her generation, she was able to ascend to the middle class because public education gave her a degree that allowed for a career and included a union collectively bargaining on her behalf. Janus weakens that union and the people who comprise it, the Mrs. Joravskys of the world. And the Mrs. Joravskys of the world inspire the next generation of kids, from the ones in their classroom to the ones eating lunch at their kitchen table.

Rachel Joravsky is a comedian, writer, and former Chicago Public School kid who currently resides in Washington Heights.Her comedy and writing has been featured on Reductress, College Humor, Refinery 29, MTV, Above Average, BET and more. She performs sketch comedy every month with her sketch group Lo-Fi NYC and with her comedy duo ThatShitRay at Union Hall in Brooklyn. You can also catch Rachel influencing the youth at the 14th Street Y where she works as a Jewish Educator in their After School program.