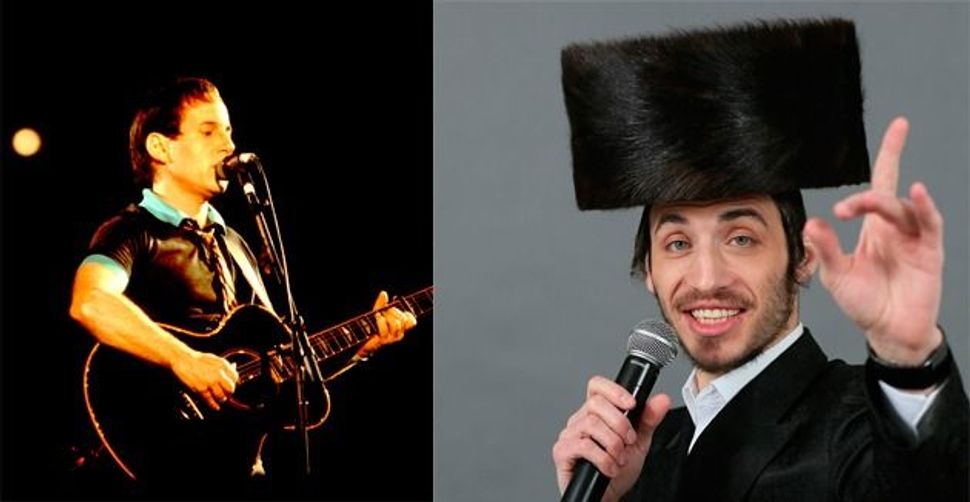 Paul Simon has been prominent in the zeitgeist recently. Ever since the legendary folk-rock singer announced his pending retirement, numerous musicians have paid tribute to the songwriter who has provided a soundtrack to three generations of American life.

The small world of contemporary Yiddish-language pop music is no exception. Until August I had never heard a Yiddish version of a Paul Simon song; now I know of two. And unlike many Yiddish covers of popular American classics they’re superb.

Both are, unsurprisingly, covers of songs Simon originally sang together with his longtime collaborator Art Garfunkel. The first, performed by the Australian band YID!, is a faithful translation of “The Boxer”. With lead vocals by Husky Gawenda (undoubtedly Australia’s best-known rock singer, who grew up in a secular Yiddishist family,) it captures the pain and pathos of the original without sounding the least bit absurd or sentimental, as translations into Yiddish often do.

The second song, from a very different corner of the Yiddish pop scene, is _ “tunklkayt”_ (darkness), an adaptation of Simon and Garfunkel’s “Sound of Silence,” re-imagined for a contemporary Hasidic audience.

Unlike most Hasidic recording artists who are hesitant to sing about life’s darker moments, Chaim Shlomo Mayesz’s songs often tackle topics like depression, albeit strictly in the context of providing spiritual encouragement to his listeners (in Yiddish: khizek). While nearly all contemporary khizek songs beat you over the head with comforting words about God or the Torah or end with a sudden, unrealistic resolution to the subjects’ struggles, “Tunklkayt” is far more subtle. Although it cites the Yiddish saying that God only gives a person as many problems as he or she can handle, the song is mostly a dialogue between two friends, with one promising the other that one day he’ll laugh about his current troubles.

Musically, the version is first-rate, and the Yiddish translation, by Shragi Lichter, is enchanting, despite some syntax errors that will surely give certain Yiddish scholars heartburn. And as always, Mayesz’s beautiful bass voice is a wonder to behold.

I’m eagerly awaiting Mayesz’s next album. Perhaps he’ll do a cover of a Bob Dylan or a Leonard Cohen song. After all, he already did a great job covering Justin Bieber.