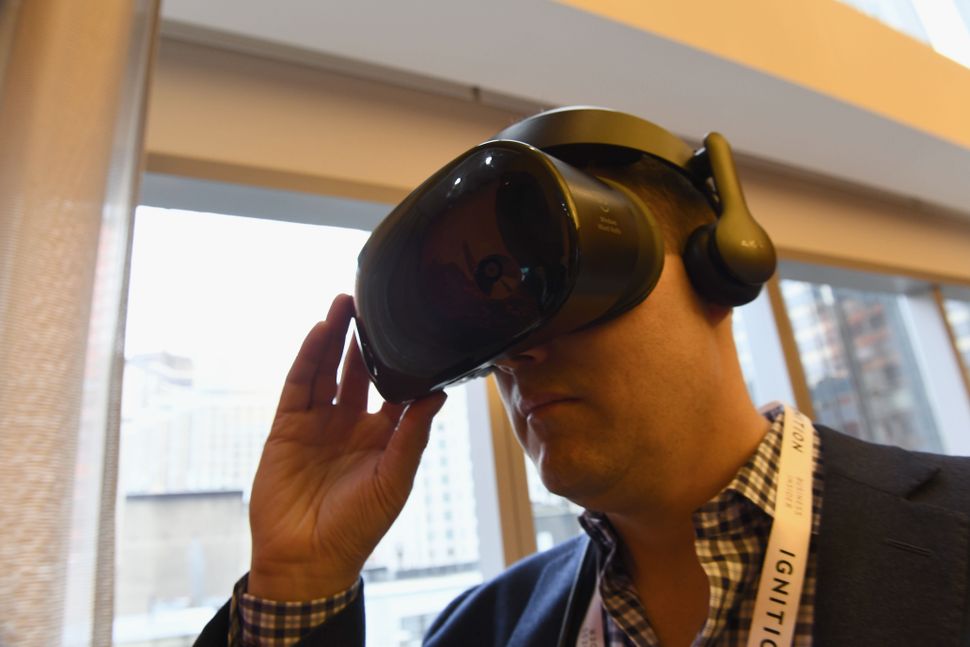 A view of VR at IGNITION: Future of Media at Time Warner Center on November 29, 2017 in New York City. Image by Getty/Roy Rochlin/Stringer

Like many institutions devoted to Holocaust education, the Museum of Jewish Heritage in Manhattan is confronting a problem: How to tell the stories of survivors when their numbers are dwindling.

“In Confidence: Holocaust History Told By Those Who Lived It,” a new exhibit that opened at the museum on September 16, poses a variety of different solutions to this problem, some traditional and some innovative.

The exhibit includes large panel displays of period correspondence, artwork, photographs and journal entries as well as smaller artifacts like jewelry and notebooks. Much of the work is strikingly intimate and nearly all of it was hand-delivered to the museum by survivors or their relatives. The installation also features newer work, most notably, a virtual reality film “The Last Goodbye” in which Pinchas Gutter, a survivor of six concentration camps, takes the viewer to Majdanek where his immediate family perished.

“As you’re walking through the exhibit you’re walking through both media and time,” said Miriam Haier, the installation’s curator and Senior Director of External Affairs. “Some of these pieces were created by people who were actually in ghettos and camps writing secretly, drawing secretly trying to record their experiences and their feelings and other pieces were kind of self-consciously created after people became more interested in telling their stories.” 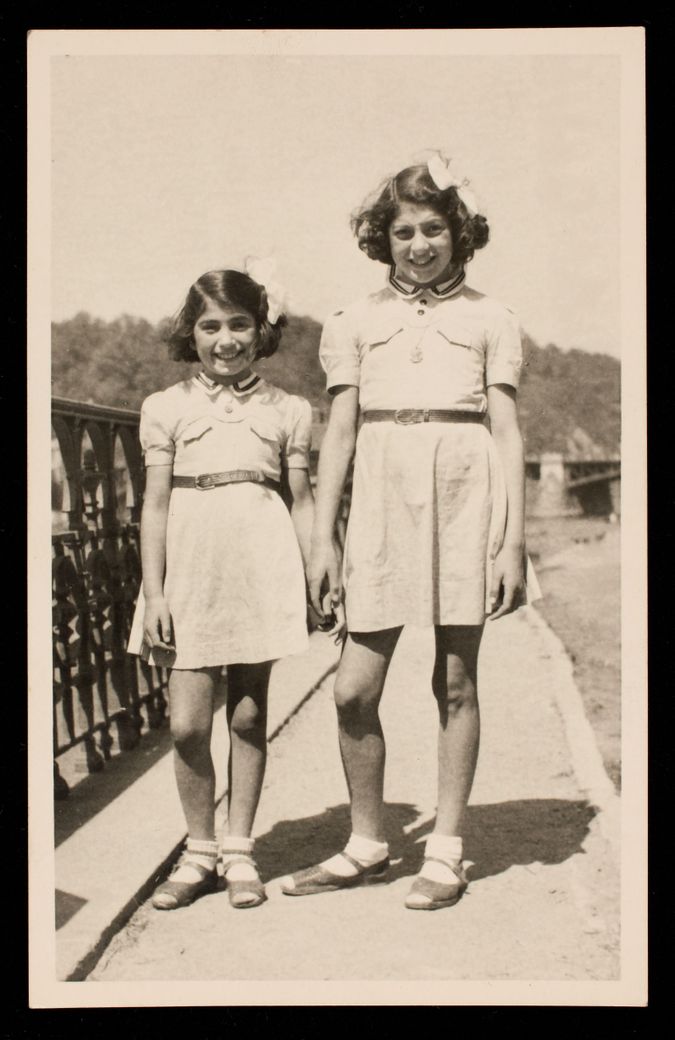 Photo of Gita and Zuzana Hojtasova in Prague, 1945. Printed on postcard stock. This photo shows the sisters standing outdoors and smiling for the camera, wearing bows in their hair. Note that their clothes do not fit—their dresses are short, and their shoes are cut. It is shortly after liberation. Image by Courtesy of the Museum of Jewish Heritage. Gifts of Gita and Milton Kaufman and Sue and Howard Pinsky.

Because families donated many of the artifacts, the selections often tell complete family histories. The early lives of two pairs of sisters, Gita and Zuzana Hojtasova and Regina and Bromia Cajfinger are presented to visitors in an impressive catalog of items. Zuzana’s art projects and Gita’s letters to her mother from the sick ward are displayed near photographs of the two sisters after their liberation from the “model” concentration camp of Terezin. Bromia’s handwritten Passover greeting to her mother, who fled to England ahead of her, and Regina’s autograph book lend insight into the life of young refugees who escaped to the UK via the Kindertransport. Other documents tell stories of their own. Among the most interesting preserved journals are a matchbook-sized diary kept by Debora Halberstam on the train to Bergen-Belsen and one of the journals of Kara Wolf, who knew she was documenting history.

“There were people that felt ‘my experience is important to record’” Haier said of the Wolf’s diary “but there were also people that thought ‘I’m going to have to tell somebody this story someday, so I better write down notes.’”

Of course, not all of the exhibit’s artifacts are as complete and not all of the people who owned or produced them survived World War II. The portfolio of the artist Peter Loewenstein, who perished in Auschwitz, was first placed in the care of his mother and sister and then, when they were deported, with a friend.

“It was hidden in a barrack wall. His sister was able to reclaim the works after the war but he perished in Auschwitz so this is an example of someone whose work really survived him,” Haier said. 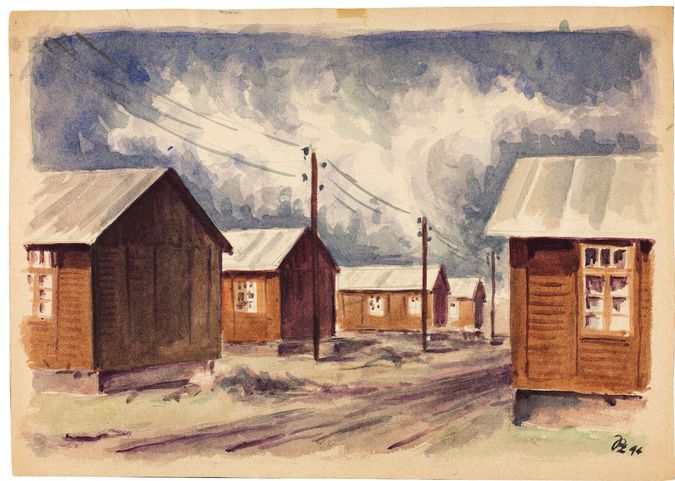 Peter Loewenstein, South Barracks, 1944 Watercolor on paper, signed and dated on the bottom right: ͞PL 44.͟ The wooden South Barracks with electrical lines. On reverse in pencil: ͞#29.͟ Gift of Gerda and Herman Korngold. Image by Courtesy of the Museum of Jewish Heritage

A selection of Lowenstein’s watercolors of Terezin’s barracks and the surrounding landscape are presented both in their originals and as blown-up wall displays alongside the artwork of Helga Weissova who survived the war to earn a living as an artist. When Weissova was 14 and 15 in the Terezin camp she produced over 100 watercolors and drawings of camp life including the deportations, the prisoners scrounging for food and even inmates sawing the top row of the bunk beds in the barracks in an attempt to “beautify” their living conditions. “When the Red Cross commission would come to visit, they would cut down the third layer of bunk, because they felt that that made it look overcrowded and unnatural,” Haier said. “They would make those people [on the top bunk] sleep in the attic. It was really bad luck for the people who were stuck up there.” 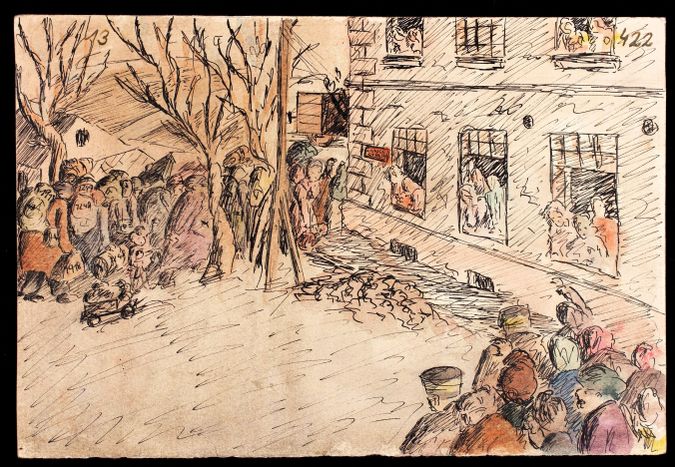 Helga Weissova, Transport / Transport leaving Terezin (2), 1943
Watercolor and ink on paper. People walk past the Hamburg barracks to the train that will deliver them to Auschwitz. Others witness their deportation—and say goodbye. Image by Courtesy of the Museum of Jewish Heritage

Weissova and Lowenstein’s renderings of concentration camps are accompanied by more recent works by the Soviet-born artist Mikhail Turovsky, which imagine shtetl life before the war.

The exhibition also features artifacts relating to the Lodz ghetto in Poland, the second largest ghetto in occupied Europe, which at its height crammed 200,000 souls in 1.6 square miles. The items, which include a Star of David badge, ration cards for meat bones and baby shoes produced by Jewish children in a workshop accompany the diary of Rywka Lipszyc. The materials surrounding the diary are adapted from the Galicia Jewish Museum’s show “The Girl and the Diary” and offer a candid account of a girl from between the ages of 12 and 14 who was trapped in the ghetto.

“She wrote a lot about how different she must be from other children,” Haier said. “She was very interested in what this experience did to her and her community. You can imagine that people weren’t very nice to each other in an environment where food was scarce, so she wrote a lot about the pain of watching this happen.”

Lipszyc’s diary, which was discovered toward the end of the war by a Soviet doctor near a crematorium in Auschwitz, ends with an incomplete last page. She is not documented among the camp’s dead, so some mystery remains over her fate. 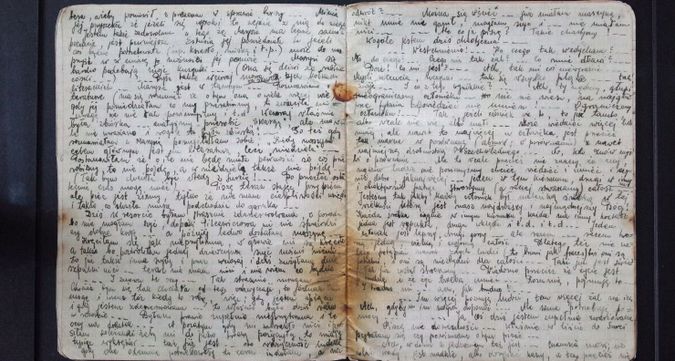 A tablet to the side of the diary, which can be read in full in book form, shows Henryk Ross’s photographs of the Ghetto and provides context for Lipszyc’s world.

The virtual reality film “The Last Goodbye,” presented in conjunction with the USC Shoah Foundation is meant to provide a different kind of immersion. The visitor is placed in a chamber with a VR headset and follows Pinchas Gutter on his final visit through Majdanek. The viewer stands near Gutter as he recounts his experience in the camp and can even explore Majdanek’s gas chambers, sanitation rooms and crematorium in three dimensions. When the film is over, two museum staff members escort the viewer out of the exhibit and into the “Dimensions in Testimony” installation where they can ask questions to a recording of Gunter presented on a screen – his answers may not always correspond to the question you ask, but they are always interesting and often hopeful. Gunter and a number of other survivors were filmed “in the round” answering 1,500 questions and will some day appear as holograms. 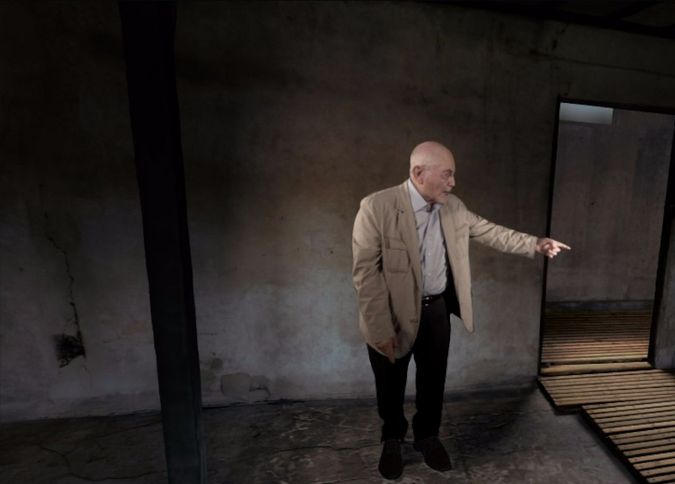 “The hologram technology exists right now, but interestingly, because of the way it is you’d have to stand further away and people are fine with the screen as long as they can stand closer to Pinchas,” Haier said.

When asked how she felt about presenting new technology alongside decades-old primary documents, Haier was excited about the potential to tell old stories in new ways.

“I think that one of the things we try to do is use whatever tools we’re given. That includes VR but it also includes incredible opportunities to learn from human beings,” Haier said. “So we’re doing things like Dimensions in Testimony and VR and super high-tech things, but we’re also doing a program called Heritage Testimonies where we’re asking people of the second and third generation to present their ancestors’ experience. So again we’re preserving in-person and really using whatever we can to make sure that people can access this history.”