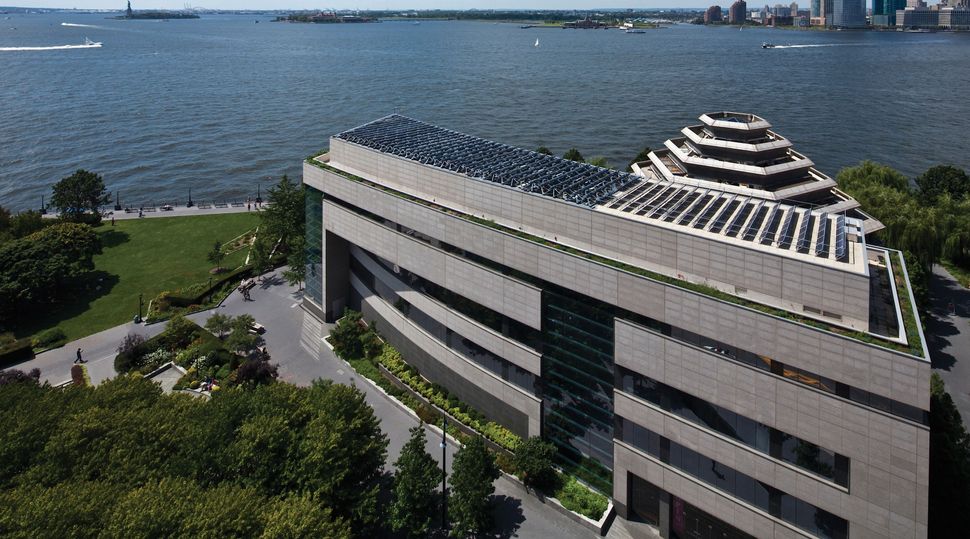 The Museum of Jewish Heritage is located at the tip of Manhattan, in Battery Park, nestled beside a quaint garden with panoramic views of the Statue of Liberty. Offering three floors of teachings on Jewish life, with objects culled over the past century, the museum aims to educate viewers about Jewish life before, during and after the Holocaust. Yet, despite that, for years it has suffered financially, and in October its longtime director announced his resignation, which could leave the museum in an even more vulnerable position.

David Marwell, a historian who served as the museum’s director since 2000, previously worked at the U.S. Holocaust Memorial Museum, in Washington, D.C., and is also known for investigating and testifying against Nazi war crimes. He is planning to write a book about his involvement with the Josef Mengele case.

Marwell said that for a number of years he had been thinking of resigning, and had intended to stay only until Robert Morgenthau, the museum’s former chairman and a past Manhattan district attorney, departed, which happened in June 2013. The developer, Bruce Ratner, who owns Forest City Ratner Companies, a firm that owns prominent real estate such as The New York Times Building and Barclays Center, succeeded Morgenthau.

When asked whether this fueled his decision to leave, Marwell paused and laughed, but reiterated that he had known he would be resigning once Morgenthau stepped down.

Ratner, who was unavailable for an interview, has been on the board since 1996. Marwell described him as “entrepreneurial, energetic and focused.” A January 9, 2012, Times article said of Ratner that he had a “political maestro’s touch.”

“I was surprised that David decided to leave,” said William Shulman, president of the Association of Holocaust Organizations.

Although there is no evidence that Marwell was forced out, Shulman said: “I don’t know what they’re going to do. With David, they have an outstanding scholar in the field. Boards do strange things sometimes.”

Over the years, the museum has struggled. Its annual visitor attendance is approximately 150,000, significantly less than other Jewish-affiliated museums in the city. The Jewish Museum welcomes about 200,000 attendees per year and the Lower East Side Tenement Museum, 250,000.

According to Marwell, one of the biggest challenges over the years has been fundraising.

“We have virtually no debt and have expanded and come through very difficult financial times,” he said. But he explained that it’s been hard to build an endowment, particularly because the museum opened only in 1997.

A Wall Street Journal article from February of this year stated that in the past six years, the museum has run five deficits, three of which topped $1 million. The museum’s 990 forms indicate that, in 2012 and 2013, it ran deficits of over $2 million and $5 million respectively.

“There was a struggle financially,” Morgenthau said. “We didn’t have an endowment. We paid off the mortgage, so it was pretty much free and clear of any debt.”

Abby Spilka, who worked as the museum’s communications director from 1998 to 2014, said the lack of money directly affected its ability to market exhibitions successfully, and therefore its ability to draw visitors. She said she wanted to put advertisements in subway cars, which, she estimated, would have cost between $100,000 and $200,000 and to ramp up presence on television, radio and print platforms. The museum was often able to secure only two or three print notices for the duration of an exhibit.

“It’s frustrating,” she said. “Money is what’s needed.” Spilka left a year ago to pursue a graduate degree. Her position remains vacant.

A common complaint about the museum is its inconvenient location, though the inconvenience depends, of course, on where one is coming from. A few weeks ago, I started off at Maiden Lane in the Financial District and wound through tight streets for 10 minutes until buildings gave way to sky at Bowling Green. From there I crossed over to Battery Place and followed the broad, curved sidewalk for another 10 minutes, past people drinking beer or rollerblading in the park, and fishermen reeling up catches from the Hudson. The views of the Freedom Tower on my right and the river on my left made the walk surprisingly enjoyable, considering the grievances I had heard.

“It’s a great location visually, but difficult for me to get to,” said Shulman, who lives in Queens. “Imagine if people knew about this museum. They would visit. There are other things in the area.”

“I think that we never kidded ourselves that even a portion of the people who visit the Statue of Liberty would even visit the museum,” Spilka said.

Marwell said residents on the city’s Upper West Side complain about the commute as well.

“That’s because they don’t try,” he said. “I couldn’t think of a more resonant, symbolic site than ours.”

“Downtown is thriving,” said Anita Kassof, who served as the museum’s deputy director from 2011 to 2014 and worked with Marwell at the D.C. Holocaust Museum before that.

However, that wasn’t always the case.

“Having a lot of geographical trauma definitely did not help,” Spilka said, referring to how 9/11 and Hurricane Sandy affected attendee numbers. She said the museum had to continually assure people that the area was safe to visit.

One might have thought that the new National September 11 Memorial & Museum might draw more visitors to the area. So far, though, it has had no demonstrable effect on the number of visitors to the Museum of Jewish Heritage.

Those who know the museum well praise its approach of presenting Holocaust remembrance within the broader context of Jewish life. The first and third floors of the permanent collection — housed in a hexagonal shaft of which the six sides represent the 6 million Jews who died in the Holocaust — provide a basic-level introduction to aspects of Judaism through antique objects: bar and bat mitzvah invitations, a rabbi’s book of brises, holiday prayer books.

On a recent afternoon, Ian McCargo, a man visiting New York City from Leeds, wandered through the museum, taking a pause on a bench on the first floor. He said he hadn’t yet seen anything new or exciting as he perused the gallery. He has visited several other Jewish museums in Europe, but none in the United States.

“It’s been a more intense kind of experience,” he said of the other museums. “The moment you walk in, it’s more emotional.” McCargo said that so far, he thought this museum served as a beginner’s guide.

The printed explanations beside each object simply tell you to whom that object once belonged, all of them laypeople, and who donated it — usually family members.

The second floor, which is devoted to the Holocaust, offers another display of personal items, like diary entries and children’s shoes, along with posters of Adolf Hitler and photographs of skeleton-thin boys in the concentration camps.

On the third floor, the exhibition ends with a photo of a village in Darfur and a brief write-up imploring the viewer to stop the genocide.

“I don’t think it’s the only way to do things, but it works,” Kassof said of the museum’s double focus on Holocaust and Jewish life.

No one I spoke with seems to know what will happen to the museum after Marwell departs in December. Marwell doesn’t know who will replace him, and said he assumes Ratner is conducting a wide search.

Kassof said Ratner has spoken about wanting to increase attendance and fundraising.

Marwell thinks the museum needs to ramp up its marketing department. “It could be much better, and New York is very competitive,” he said.

When asked whether Ratner has made any headway, Marwell paused and laughed. “It takes a while to get the hang of it,” he said.