Romance gone bad lay at the heart of two operas — each part of a summer festival — one performed in Manhattan, the other upstate at Bard College. The Bard event, the first American staging of Leos Janacek’s “Osud” (“Fate”), and the first offering in Bard’s new SummerScape series, was notable because it inaugurated in earnest Bard’s plans to make its bucolic campus something of an arts destination, and because it marked the debut of the architect Frank Gehry as a set designer.

Gehry designed Bard’s new performing-arts space, the Richard B. Fisher Center, which opened in April. It is a stunning building, inside and out, and it is especially striking in the relative void of Bard’s undulating, verdant campus. But what qualifies a master builder to construct stage sets remains unclear, unless it’s drawing carloads of critics from both sides of the Atlantic. His set, aside from the uneven raked stage, consisted of three suspended forms, two of which were translucent and resembled crumpled handkerchiefs. The other looked like a lobe of liver. Only Jennifer Tipton’s subtle lighting imparted any life to Gehry’s creation, most of which you couldn’t look at if you wanted to watch the show, anyway.

“Osud” is among Janacek’s least-known operas — to say nothing of his shortest, lasting less than 90 minutes. It has none of the mystery that envelopes “The Makropulos Case” nor the cheek that enhances “The Cunning Little Vixen.” Nor is it as involving in its depiction of domestic horror as “Jenufa” or “Katya Kabanova.” It is, in effect, three scenes from the life of a Janacek alter ego named Zivny, a composer dominated by an ill-fated romance. In the first act, Zivny reconnects with an old flame, Mila, who bore his child. The second act takes place four years later, with Zivny and Mila now married and living with their son and her mother, who opposed the marriage and has been driven mad by it. Zivny has written an opera based on his relationship with Mila, which his mother-in-law mocks. She and Mila struggle, and the two fall to their deaths. The final act brings us forward 11 years to a conservatory at which Zivny is a professor and his son a student. Zivny’s autobiographical opera is being rehearsed when he arrives. Asked about the work, the composer imagines his wife’s ghost and collapses. 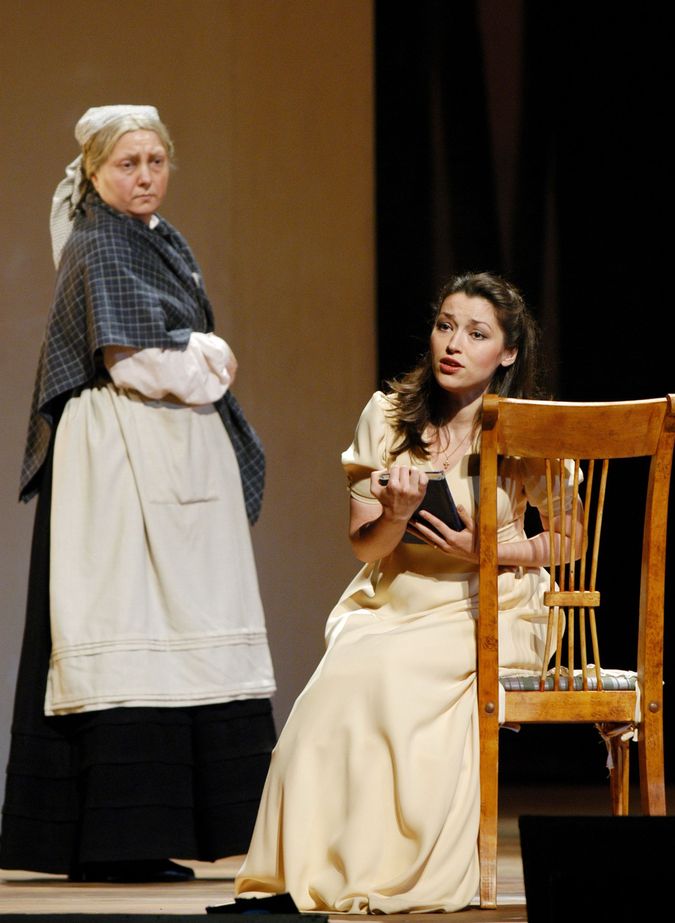 SUMMER OF LOVE: In the Kirov Opera production of ʻEugene Oneginʼ at the Metropolitan Opera, Irina Mataeva stars as Tatiana (above right, with Olga Markova-Mikhailenko).

Janacek took great pride in the veracity of his first act, a pitch-perfect rendering of a Middle-European spa-town when properly realized. As with Gustave Charpentier’s “Louise,” part of the appeal of “Osud” is extra-musical: its ability to transport audiences to a lost world. Such matters were obviously of no concern to Gehry, and director Jo Anne Akalaitis clearly concurred, preferring a stylized mise-en-scène more akin to “Last Year at Marienbad.” Though the cast sang in Czech, these American singers weren’t exactly idiomatic. The orchestra, led by Bard president Leon Botstein, who conducted competently and enthusiastically, if rarely with nuance, was flattered by the hall’s acoustics, the work of Gehry and Yasuhisa Toyata — the duo responsible for the Walt Disney Concert Hall in Los Angeles, which opens next month. But though the sound was bright and well defined, there was also, at least on this occasion, a sense that the players were miked. Bard officials insist that there was no artificial amplification. Perhaps the cowl over the pit played sonic tricks.

Tchaikovsky’s “Eugene Onegin” is far better known than “Osud.” Indeed, it was the most familiar of the six works the Kirov Opera brought to a summer residency at the Metropolitan Opera. The plot, based on Pushkin’s famous novel in verse, revolves around Onegin, a dyspeptic but sexy cosmopolite, and Tatiana, a winsome adolescent provincial. Tatiana falls for Onegin, but her feelings aren’t reciprocated. Years later, Onegin sees Tatiana again. Only then does he realize he loves her. But he is too late, and she rejects him. It’s a juicy, satisfying story, yet what really accounts for the opera’s popularity is Tchaikovsky’s tuneful, spirited music.

Naturally, with the Kirov Orchestra in the pit (under Tugan Sokhiev’s baton), the music received the kind of glowing, organic reading that reminds us afresh what a magnificent score this troubled composer wrought. More surprising was the way Pushkin’s tale was conveyed dramatically. Instead of the traditional spectacle of middle-aged singers inhabiting youthful roles, audiences were treated to performers who actually looked their part. This was especially true of soprano Irina Mataeva, whose Tatiana couldn’t have been fresher. In the all-important letter scene (arguably the opera’s high point), Mataeva jumped about the stage like a teenager in love. Her coltish, silver-voiced account will likely, and rightly, serve as a New York benchmark for years to come. And praise, too, to tenor Yevgeny Akimov’s Lensky, whom Onegin kills in an avoidable duel. Lensky’s aria is another of the opera’s peaks, and the rich-voiced Akimov sang it ardently, with that attractive keening quality characteristic of the finest Russian tenors.