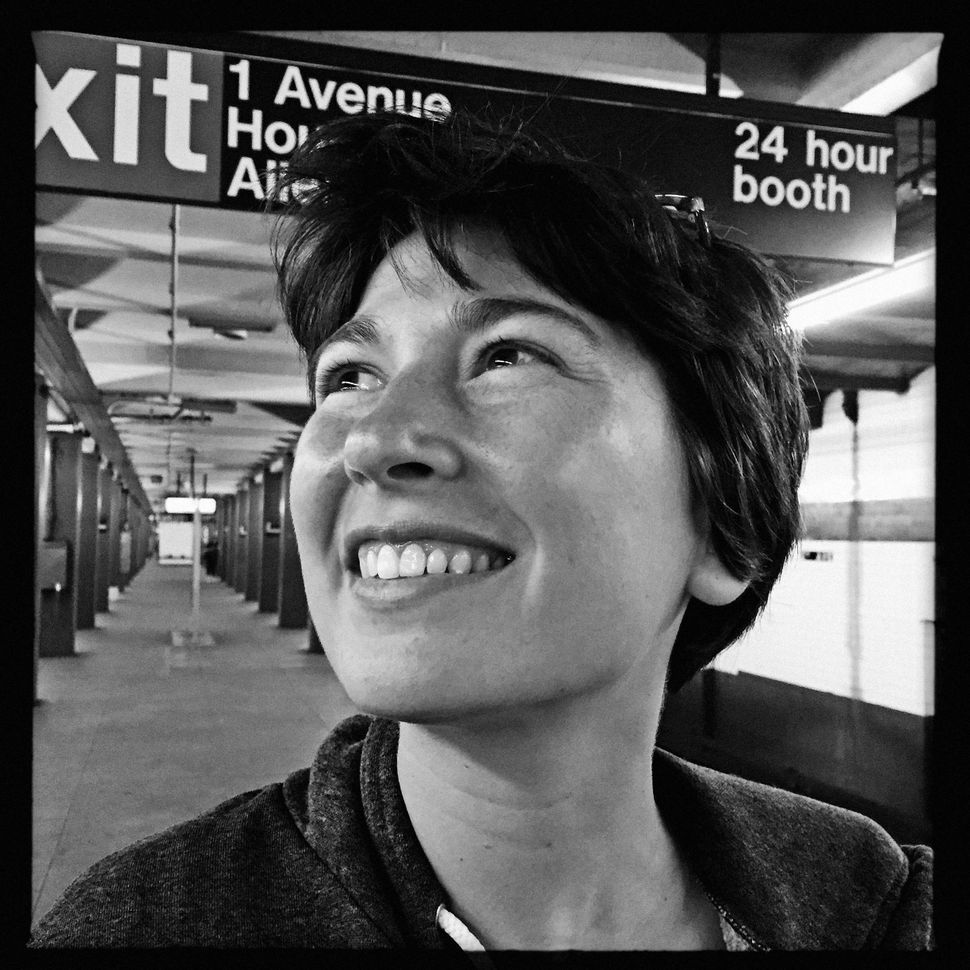 In many ways, the comic artist Liana Finck’s work is fearless. Finck’s style is bold in its simplicity and storytelling, and now, in her latest book, “Passing for Human: A Graphic Memoir” (Random House) brave in its intimacy. The book follows Leola (a fictionalized version of the artist) as she tries to reckon with the loss of her shadow by drawing her story. Leola returns to the drawing board over and over again, beginning with her mother’s history with her own shadow and moving on to her father’s strange childhood before coming to terms with herself and her relationship with her craft. Leola starts the book many times, but she never gets past the many different “Chapter 1s.” Of course, like many fearless pieces of art, “Passing for Human” is also about fear: of not fitting in and not being up to the task of making art. The Forward’s PJ Grisar spoke with Finck, who is a regular cartoonist for the New Yorker and a contributor to the Forward, about her newest book.

PJ Grisar: In many ways this book is about origins — your own, your parents’ and also that of the book itself. How did “Passing for Human” assume its final shape with your avatar, Leola, beginning the book with different starting points? Did it always have that framing device?

Liana Finck: No. It didn’t even start as a memoir. It was 2012 and I was finishing “A Bintel Brief,” which was my book before, and I needed a new project and I was very impatient and I didn’t know how to make money yet, so I really wanted a book advance right away. I’ve always really liked Vladimir Nabokov, and I thought it would be fun to do an adaptation of “The Real Life of Sebastian Knight” [Nabokov’s first novel in English, about a writer working on a biography of his half-brother], and so [“Passing for Human”] started as that at first. I was trying to sell my agent on it and I was doing a few pages, and meanwhile he asked the estate of Nabokov and they said I couldn’t do it. So I slowly started changing what I was working on. [“Sebastian Knight”] is kind of a book about two brothers who are alter egos of each other, so I changed them to sisters and then one of them became me and then, I don’t remember why, but one of them became a shadow and then the story disappeared and it became this madcap adventure about a shadow coming back to haunt its person after its disappearance. But I was also really young [26], and I didn’t know how to keep a story going forever and it just trailed off. Instead of taking a month and thinking really hard about a good project, I immediately went back into these failed pages from this thing that kept morphing and it became a memoir. And then a couple of years later what I had was many false starts of the memoir, and once I tried to start with my mom’s story and my own story of being a weird kid and then, much later, when I was really trying to pull it together, I got tired of starting over and I just decided to use all the beginnings I already had. And that’s how the framing device came.

There’s so much about the creative process in here. How do you work? Do you use software for your drawings or are you more analog? Is it a mix of both?

In my life I do a mixture. I think I change every few years, but when I was working on this book it was always pen on paper. I always used the same pen, this very thin gel pen from Muji. But I thought really hard about how to make a comic that was more like writing, and I thought the way to do that was to draw very simply and be able to just redo each page a million times quickly and to edit that way. That’s where I came up with this kind of modular style with all the boxes the same size. And I used a kind of translucent paper and I traced. I’d redo each page a zillion times and make little changes each time I redrew.

When you’re working, do you welcome influences or do you try to avoid them? The book has many epigraphs and, of course, with all the stuff about losing your shadow, I can’t help but think of Peter Pan.

“Peter Pan” was [a] major [influence]. I think that’s really where the shadow comes from. I relate so much to Wendy in “Peter Pan,” because she has to grow up. She can’t be a kid forever. She lets go of magic, and I think it’s such a powerful female love story where she’s chasing this person who has so many more options than [she does] and [who] gets to have so much more fun. But in the end, she’s the one who’s able to see and who’s able to feel, and he’s not.

Graphic memoirs are very popular now, but this feels different from many others in that it is not quite an autobiography. Names are changed and there’s quite a bit of fantasy.

I don’t think I’d be capable of writing an exact memoir, because I think in metaphors. Everything I write to me is very real, but I know it’s not what the world would call real. I also really don’t get fiction. Why would you make something up? How would you make something up? I have no idea. I just like stories. Anything emotional feels true to me.

You’ve worked with the Forward, and even based your first book, “A Bintel Brief,” on the advice columns of the same name that used to run in our newspaper pages. Now you have your own advice column at The New Yorker, “Dear Pepper.” What about the advice column format intrigues you?

I didn’t feel any way about advice columns until I read “A Bintel Brief” and totally fell in love with it. I went through this very highbrow intellectual phase when I was a child, like 12 through 22 or something, and I would never have read a newspaper, let alone an advice column. It was all about poetry. I think I came to the end of poetry when I was 23. I had gotten all the feelings that I could out of it and then I was looking for more feelings. I was trying to read Hegel and stuff, and the feelings weren’t there. And then by chance I picked up “A Bintel Brief” and there they were.

This book feels different from “A Bintel Brief.” What comes first for you, the narrative or the style?

I think this book grew out of the interstitial part of “A Bintel Brief.” The first parts that I drew were actual adaptations of the letters. I connected them with this kind of made-up personal story where I meet the ghost of [Forward founder] Abraham Cahan he reads “Bintel Brief” letters out of an old notebook that belonged to my grandma, and I fall in love with him. In a way, that was the only fun part of “Bintel Brief” to make, because in the stories I felt like I was the conduit for Yiddish and the actual stories and the history to come into this new form. The interstitial part wanted to be, in the style, like “Passing for Human” but I hadn’t figured it out yet. Very simple, even lines. I’ve discovered that I don’t really like facial features, I just like facial expressions. I very consciously came up with a character who doesn’t really have facial features but she has these really overblown facial expressions and body language. I stopped using a brush and I started using a pen that I think is very expressive.

I imagine the palette, black and white, was a natural fit for the interplay between the shadow and the light.

Yes, it was originally called “Light and Shadow” and we thought that was too poetic and quiet for a title. But it fit the cover.

Your book deals with feeling not-quite-human and different from your peers. How has your relationship to otherness changed over the years? Do you feel different now or just different about it now?

I think it’s all about the internet. Sometimes I wonder if I hadn’t been a child of Facebook and text messaging and online dating, if I would be the kind of person who thinks of herself as very different from everyone else and maybe lives in a house by the ocean and has animals. I really always thought that’s who I would be, and now I’m just a person with a lot of friends. But I was raised in a time and place [the ’90s in Orange County, New York, and Rockland County, where Finck attended a Jewish day school] where anyone even shy, strange or different was very weird. In other words, The suburbs. I think as I’ve been able to post things immediately on the internet and see people’s comments it kind of blows my mind that people relate to all those ideas of feeling so different.

Something interesting in the book is how you manifest your gnawing doubts that are nagging at you.

Are those still lingering with you or have you allayed them?

They take different shapes. The doubts in the book are about not being able to draw. I think I allayed those doubts a long time ago. I was very self-conscious as a late child and young adult. When I was a kid I was so shy I couldn’t talk, and I felt that way about drawing later. I couldn’t express myself, and that’s really what the book is about: learning to shovel all those fears off of my one way of really expressing myself since I was a kid. But I have doubts in other areas now.