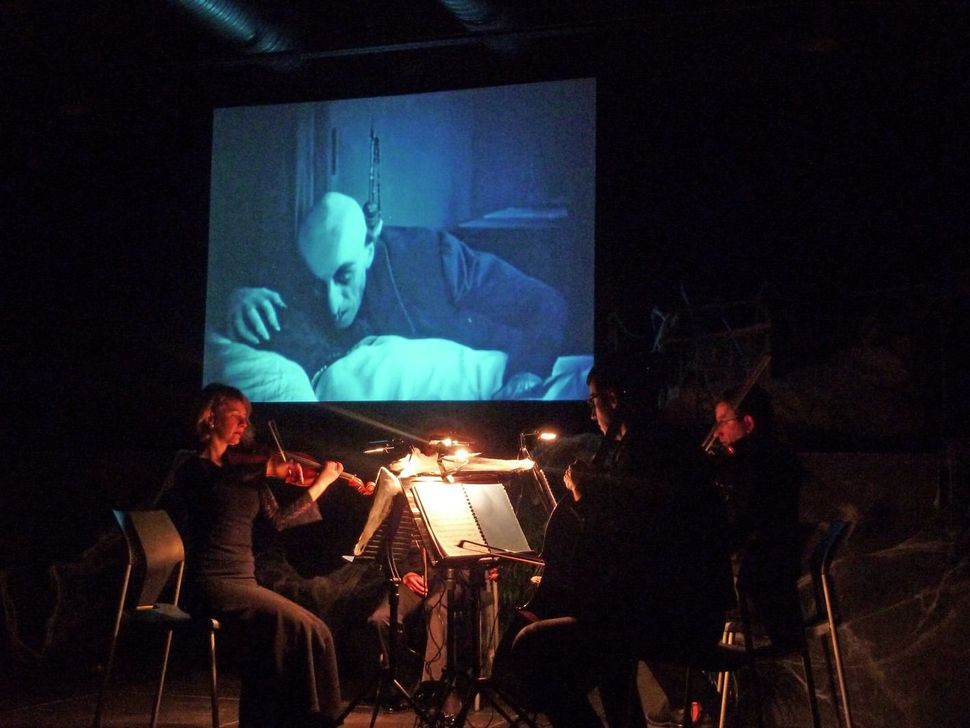 We all know the story of Judah Loew ben Bezalel, the legendary rabbi of Prague who, from the mud of the Vltava River, willed his famous Golem into existence. But what of Henrik Galeen, the Austrian Jewish horror maven who first committed the story to the silver screen? In Galeen’s hands, the servile terracotta enforcer attained a new level of consciousness. As crafted by a European Jew, the tale of the Golem becomes an allegory of alienation and an outsider trying to fit in.

On January 14, 1915, in Berlin, the first film about our people’s most famous monster was unleashed on an unsuspecting German public. Silent but shudderworthy, “Der Golem” tells the tale of a Jewish junk merchant who revives the Czech Jew’s famous protector with an amulet. When the earthenware giant falls in love with the antique dealer’s daughter, he goes on a rampage through the estate of a local count until, overwhelmed by her touch yet unable to join with humanity, he hurls himself from a rooftop, lost to the ages once more.

Unfortunately for us, save for four minutes of footage, the full reel of “Der Golem” is also lost. While it’s rumored that a complete print exists, whoever owns it has been stingy with the canister, leaving cinephiles the world over to settle for two short fragments of an hour-long feature. Thankfully, Galeen collaborated on the script for a prequel, the 1920 German film “The Golem: How He Came Into the World,” which survives in its entirety.

But even from the 1915 film’s limited footage, the viewer can sense the unique handiwork of the co-writers, directors and stars: Paul Wegener — who plays the Golem with comical Prince Valiant hair — and Galeen himself — who plays Troedler, the junk dealer, in sidelocks and a yarmulke.

“He was drawn to all kinds of monsters. People who are in between identities, people who want to be something else. This social position of someone who wants to get in but is recognized as ‘other’ was very attractive to Jewish filmmakers,” film scholar Ofer Ashkenazi, author of the book “Weimar Film and Modern Jewish Identity,” said in a phone interview with the Forward. “His monsters are not so monstrous.”

Galeen was born Heinrich Wiesenberg in 1881 in Stryj, in what was then the Austro-Hungarian Empire. Ashkenazi believes he picked up the surname “Galeen” after traveling as an actor through the Swiss province of St. Gallen.

After “Der Golem,” Galeen scripted the 1924 horror anthology “Waxworks,” which featured a terrifying Jack the Ripper a full five years before G.W. Pabst spooked audiences with the famous murderer in “Pandora’s Box.” But Galeen is best remembered for his screenplay for F.W. Murnau’s “Nosferatu: A Symphony of Horror,” the definitive vampire film.

It turns out the stature of “Nosferatu” in cinema studies is due partly to a mistaken impression on Galeen’s part. While the film is unambiguously inspired by Bram Stoker’s “Dracula,” its indelible contributions to the vampire myth stem from Galeen’s belief that the Stoker novel was still under copyright and not eligible for direct adaptation. Straying from the novel allowed for the bat-like look of the character of Count Orlok and the notion that the light of the sun can evaporate vampires to wisps of smoke. In the book, Count Dracula appears human and is merely weakened by the sun’s light.

“At some points in the film it’s not really clear if Nosferatu or the good German character is the monster,” Ashkenazi said. “It’s an interesting idea coming from a Jewish scriptwriter to make the monster so hard to grasp.”

In 1926, Galeen co-wrote and directed a remake of “The Student of Prague,” about a poor scholar, Balduin, who surrenders his reflection to the devil for wealth and the love of a countess. Like “Der Golem” and “Nosferatu,” the film is another tale of someone on the fringes striving to assimilate.

But perhaps Galeen’s most fascinating feature was the 1928 film “Alraune,” a pseudo-scientific meditation on nature versus nurture that outdoes this year’s surprise documentary hit “Three Identical Strangers” in its strangeness. The film is based on Hanns Heinz Ewers’s novel of the same name, and follows a young woman who is the result of the artificial insemination of a prostitute with a mandrake root. It explores psychosexual impulses and wonders at the interplay of genetics and social conditioning. Galeen’s was not the first movie made about the story, but was certainly the most sympathetic toward the female lead.

“He took this femme fatale and turned her into someone who really wants to be one of the club,” Ashkenazi said.

When the specter of Hitler’s Reich descended on Germany, Galeen immigrated to Sweden and England for a time before relocating permanently to America.

In the United States he succeeded in doing something to which his characters often aspired: wedding nobility. He married a baroness and ran a bakery in New York with his son before retiring to Randolph, Vermont, where he would die in 1949, at age 68.