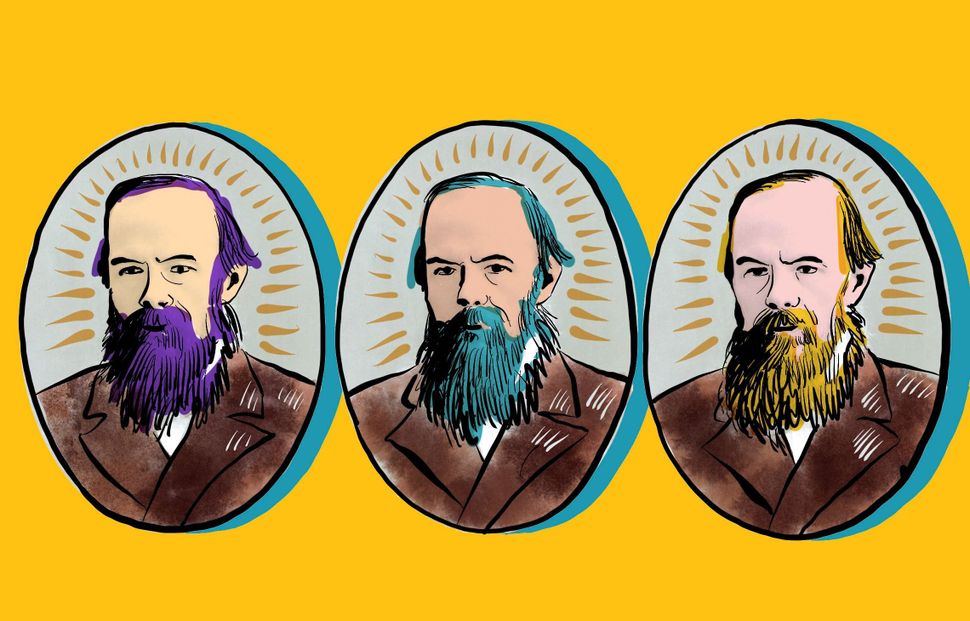 As defined by Merriam-Webster’s, “transliteration” means “to represent or spell in the characters of another alphabet.” And, one unexpected aspect of writing about language is learning how many people around the world turn out to be passionately concerned with transliteration. For example, I have received numerous missives on the spelling of mamaloshn, or “mother tongue” in Yiddish. A word to the wise: Don’t even try mamaloshen, which one correspondent called “bastardized.”

I have also noticed that the concern with transliteration is not limited to adults.

Children, the ultimate language-learners, are on high alert to the occasional need to leave a language as is. My niece, at age three, was able to explain, with intonation, the difference between oy vey and the much flatter oh no.

She intuitively understood that sometimes you just have to transliterate, as opposed to translate.

“One category of words for which I do this is those that get drained of all their Jewish flavor when translated,” explained Joel Berkowitz, director of the Center for Jewish Studies at the University of Wisconsin-Milwaukee and a translator of Yiddish plays, when I asked him about transliteration.

“Different translators will draw that line at different places, but for me, it would feel very odd to have a character in a play refer to his ‘phylacteries’ rather than tefillin, for which, by the way, you may have noticed that I just used a common Romanized spelling rather than what YIVO [Institute for Jewish Research] would prescribe, or instead of a mezuze or mezuza, a — what would you say, actually?” Berkowitz asked.

“A parchment containing verses from Deuteronomy inserted into a decorative case that is then affixed to one’s doorpost?” Berkowitz continued. “Sometimes it’s best just to stick with the original word and provide some sort of explanatory note for the reader.”

But sticking with the original word carries its own risks, in all languages. To address them, The University of Illinois library system drafted an article on “Transliteration Woes,” lamenting the difficulty of researching Dostoevsky because of various spellings of the man’s name.

The library offers an example of a scholar trying to research “Dostoevsky and epilepsy”:

And the library even offers a moral, which seems apt for Dostoevsky.

“The moral of this story — if you are not getting any results on a search where you really believe you should find some literature, try different search terms or different transliteration.”

Maybe the moral of the story is that we should try and understand the occasions when people transliterate in the first place.

“The obvious transliterations are proper nouns — names of characters, which can sometimes be tricky in English, and names of places, which are almost always tricky in English,” said Jessica Cohen, who shared the Man Booker International Prize with David Grossman for her translation of his “A Horse Walks Into a Bar.”

“Occasionally there might be other words I choose to transliterate, like specific Israeli cultural concepts that have no equivalent in English,” Cohen said. “I do this more in nonfiction than in fiction, and I tend to keep words in transliteration — sometimes in addition to a translation — when there is a linguistic point to be made.

“For example, in Amos Oz’s latest collection of essays, which will be out in the U.S. next month, there is this passage: ‘More than three thousand years ago, there was a culture here that saw fit to demand from the strong that they respect the weak. It demanded not only charity (tzedaka) but also justice (tzedek).’ The two words in Hebrew, unlike in other languages, are closely connected.”

There are official transliteration rules in many languages. In Yiddish, the rules come from YIVO, and in Hebrew, the Academy of Hebrew Language has five pages of guide- lines. The Library of Congress also offers a Romanization table for Hebraic languages.

But that doesn’t mean the rules are followed by all.

“Yes, there are definitely rules, and I mostly ignore them,” Cohen said. “I go with what seems right to me, trying to transliterate in a way that would help an English reader (who doesn’t know Hebrew) pronounce the word correctly, or as close as possible to that.”

Cohen doesn’t worry about it too much, because the final decisions are made by an editor following a particular style guide.

Barbara Harshav, the Hebrew and Yiddish translator who was honored with the prestigious PEN/Ralph Manheim Medal for Translation for lifetime achievement in translation this year, also goes with what sounds right to her: “If I have to transliterate — which I try to avoid as much as possible — I just use what sounds right. But how do you spell Chanukah in English? Hanukkah?”

Harshav added this parenthetical: (“What other example of kk is there?”)

An excellent point, I realize as I brainstorm for other English words with “kk” twice. (Let’s not think about k three times any more than we have to, in this post-Charlottesville world.) And transliterating into English also involves American versus United Kingdom usage.

“In ‘The Loves of Judith,’ the second Meir Shalev book I translated, one of the characters uses the Yiddish word farkakte, which I left in Yiddish and spelled phonetically,” Harshav recalled.

“The American editor had no problem with it; but the British editor objected that a U.K. reader was likely to pronounce it as ‘far-cake-tee.’ Shalev argued to leave it as is and let the Brits pronounce it any way they like.

“As I look at it now, I would probably spell it ‘farkahkteh.’”

If the U.S.-U.K. divide isn’t enough, academics both follow and break the rules.

“Most academics — and some others when they ask an academic — follow YIVO guidelines,” Berkowitz explained. “However — what fun would this be without a “however,” right? — almost every scholar I know who works with Yiddish transliteration makes some exceptions to the YIVO standards, primarily for proper names of people and places, as well as some other words for which there is a commonly accepted Romanized spelling. For example, if you follow YIVO orthography religiously, you would write, say, Moris Shvarts instead of Maurice Schwartz. Given that Schwartz himself used the latter spelling when he wrote his name in English, most people will allow themselves a slight departure from the ‘rules’ in the name of user-friendliness and common sense.”

There also may be some tension between academic and nonacademic approaches to transliteration — or between what Berkowitz called “people who care about a meaningful and consistent system of transmitting words from one alphabet to another” and a more what-feels-right process.

This is where spelling can mean much more than spelling, and when it sometimes can be understood as part of a larger attitude toward a language.

Berkowitz and his colleagues “constantly bump up against a pronounced flippancy about Yiddish that I’d say not only borders on contempt, but even crosses that border — for example, the widespread perception that Yiddish is a particularly funny language rather than one that embraces the same broad and nuanced spectrum of feelings and ideas that one can find in any language.

“Perhaps that phenomenon makes those of us who take Yiddish seriously particularly protective and our concern with proper transliteration may be one of the results of that protectiveness.”

Transliteration can also be especially problematic in the case of multilingual writers, and writers who mix languages.

“A Bosnian colleague and I are translating a story collection by a Bosnian writer, Miljenko Jergović, in which the writer uses Bosnian-Turkish words, like čaršija, or džehennem, or džennet, which have Arabic and Turkish equivalents,” said Ellen Elias-Bursac, a well-known translator of Bosnian, Croatian and Serbian.

Džennet means “heaven,” džehennem means “hell,” andčaršija means many things: street, town, village, community, neighborhood, society, Elias-Bursac explained. “While some words, like sheikh or madrasah, have entered into English and can be treated as English words, these others aren’t known outside the Arabic-Persian-Turkic Middle East,” she said. “We were torn, because džehennem [hell] is much better known in the typical Arabic transliteration, jahannam, and, the same with džennet: Jannah. Čaršija comes from Persian (čārsū) through Turkish: (çarşı). “We finally settled on giving the words in their Bosnian spelling with a glossary.”

There is also an homage factor in transliteration. Sometimes the choice to leave a word in its original form acknowledges a word’s cultural power.

“I think we tend to transliterate when a word is a cultural marker, in deference to its cultural specificity,” said Aron Aji, the award-winning Turkish translator and director of the Master of Fine Arts program in literary translation at The University of Iowa. “But, again, is this a foreignizing or a domesticating gesture? One rule I have is to always translate or gloss terms that cannot afford semantic slippage. ‘Jihad‘ is such a word.”

It’s fascinating to consider that our sense of jihad comes from a repeated decision to transliterate instead of translate.

Perhaps what is truly at stake in transliteration is layers of meaning. It’s not just about a word’s definition and its cultural context, but its look and its sound. This is especially important in theater — where it absolutely has to sound right.

The “smallest and most common words and expressions in Yiddish” can be trickiest in English, Berkowitz noted.

“When we prepared our anthology ‘Landmark Yiddish Plays,’ Jeremy Dauber and I had countless conversations about what to do with a word like “Nu?” he said.

“That short word not only means different things at different times, but there are different implications to whether you have a character ask ‘Well?’ or ‘So?’” Berkowitz continued, “or whether you leave it as ‘Nu?’ And you might go to bed having made one of those choices, only to wake up the next morning and wonder whether you got it completely wrong. Oy vey indeed.”

Certainly not oh no.

Nu, my little niece was on to something, wasn’t she?