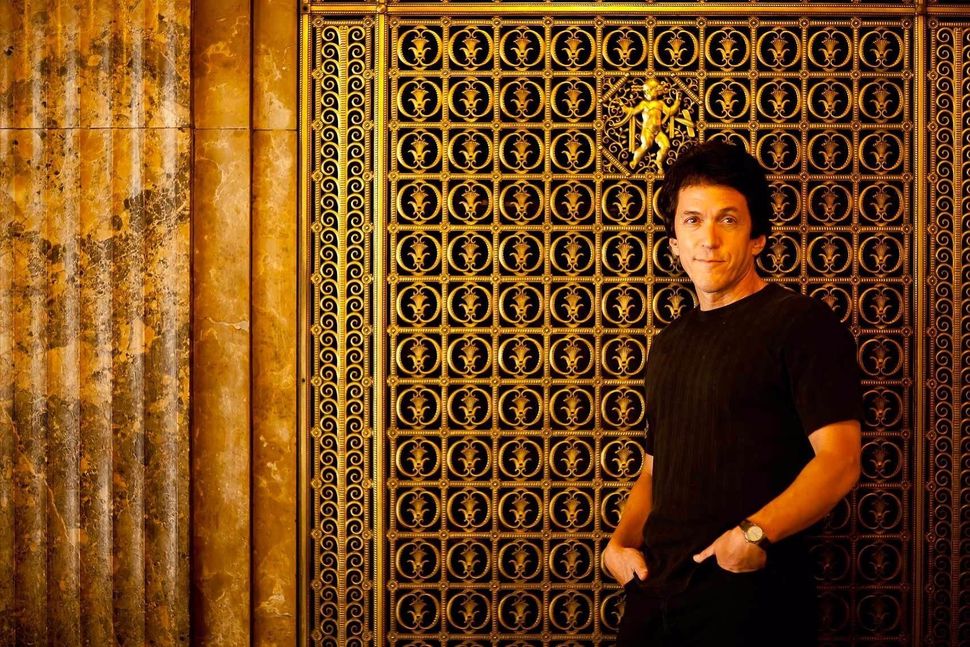 Image by Courtesy of Mitch Albom

Mitch Albom has written his first sequel. Following his 2003 bestseller, “The Five People You Meet in Heaven” the prolific, Detroit-based author has returned to the story of Eddie the theme park maintenance man and the little girl, Annie, he died saving. The new book, “The Next Person You Meet in Heaven” out Tuesday, October 9 expands Albom’s landscape of heaven, prompted by losses in his personal life. He spoke to the Forward about his book, his charity work in Haiti and being mistaken for Morrie, the famous teacher in his memoir, “Tuesdays with Morrie.”

PJ Grisar: It’s been about 15 years since “The Five People You Meet in Heaven” was released. What made you want to write a follow-up?**

Mitch Albom: Well I’ve never done a sequel before. Most of my books are sort of one-offs so this book probably more than any of the ones has been the one that I’ve gotten the most questions about. “What happened to Eddie?” “What is the second stage of heaven?” Because in the first book heaven doesn’t finish—he’s told that the first stage of heaven is you meet five people—but then, obviously there’s a second stage or a third or a fourth. I got a lot of those questions. And then a few things happened in my private life. I lost both of my parents and a little girl that we were raising all in four years and it got me thinking about heaven more than it would have if it didn’t happen, particularly when we lost the little girl. I think between the two things I said “I’m gonna go back there and explore that again.”

I’m sorry to hear about you losing your parents and the child. Was she an adopted child or a foster child?

We [Albom and his wife, Janine Sabino] have an orphanage in Haiti that I operate and she [Chika] was one of my kids — I have 47 kids there —we took her when she was a little shy of three, she was brought to us, and we raised her there until five. At age five she was diagnosed with a very severe brain tumor called BIPG, which is always deadly, and we brought her up [to the US] and she stayed with us. From the time we brought her up she lived two years and we traveled around the world trying to cure her. Trying to beat the unbeatable. She was with us every day during that time and effectively became our little girl. We were her legal guardians. We effectively became her parents. She died in April of 2017 after finally succumbing to that and that’s probably the worst thing I ever had to go through.

When did you get involved in Haiti?

2010, a few weeks after the earthquake. I went there to help an orphanage that was started by a guy in Detroit and got involved with it and ended up taking it over later that year and have been running it ever since. I’m there every month since 2010 and I’ll continue to do that I imagine for the rest of my life.

A lot of your books are about death and the afterlife and you never suggest that your vision of heaven is in any way definitive. But, this being the Forward, I want to ask if you think of Judaism as informing your view of the hereafter. Because there are lessons being learned in these books readers might be remind of the Yeshiva shel Ma’alah – the “Yeshiva on High.”

I said in the front of both books that this is just a fable, a wish and I mean that because I although I certainly respect everybody’s particular view of heaven through their religious beliefs, and mine as well, these two books are less about the faith and religious part of things than they are about life on earth and our significance to one another and the family of man. Because I am writing about how any one person on earth – be they Christian, Jewish, Hindu, Muslim or — can affect you forever in your life and you can affect them, I deliberately tried to make the book accessible for all faiths. Something that someone wouldn’t stop and say “well, I can’t go on in this because dogma-wise this isn’t what I follow.” I was very pleased with “The Five People You Meet in Heaven” that it was embraced by faiths everywhere.

You’ve worn a lot of hats in your career. You’ve been a journalist, a playwright, author, composer, philanthropist, radio personality. What’s your favorite thing to do?

Still writing. I still like to sit alone with whatever I’m writing on — a pad, a typewriter, a computer it doesn’t matter – and just create something from whole cloth. That’s still the most rewarding for me. I like all the other things and some of them seem easy to me. It’s funny cause the one I like the most is the hardest. The hardest is to sit there with an empty screen and just create. I find that talking in a podcast or radio or whatever, you don’t go through the agony when you’re doing a radio show. It’s much more immediate. When you’re done you’re done whereas you can just sit in front of a screen for an hour trying to find a word and it’s agonizing at times and yet for whatever reason it’s still the thing love the most.

In writing your books you’ve reached many people. It almost feels like these days things have come full circle and you’ve assumed this Morrie-type position for a lot of your readers. Do you receive a lot of fan mail? How do you feel about stepping into that role?

When “Tuesdays with Morrie” was written, I sent [Amy Tan, author of “The Joy Luck Club”] the book and she said to me “I have two things to say to you. One: This is a really great book and I think a lot of people are going to read it”—which surprised me. “And two: You’re about to become everybody’s rabbi.” Boy did she prove prophetic. I mean I went into the doctor’s office today, I was going for a blood test, and a guy recognized me and said “Hey, I gotta tell you a story about my health and how I was supposed to be dead and through this amazing grace and things like that I’m OK now.” It happens all the time, every day and every way and I just try to remind people that I wasn’t the smart one in “Tuesdays with Morrie.” I was the dumb one. I was the one asking questions. I much prefer the student role than the teacher role. I feel that I’m more natural at asking questions than I am at doling out advice. I continue to ask questions about life from whomever I think can teach me and I revel in the learning. The most recent example was our little girl who was only seven, Chika. I end up sitting beside people who are down to their final months and learning what they have gone through. I’ve been blessed to have all these gifts of people to teach me lessons about life and I would be remiss if I didn’t pay attention to them.

Because I think both of them are fables, you’ve already cast a magical, fable-like tone to the book. If all of your characters behave like characters in fables then nobody’s going to be able to relate to it because none of us are Snow White or an Aesop character. I thought [of] the contrast of a surreal world with real world problems—like in the first book where a father beat his son regularly, or war and the killing of a child and in the second book a difficult mother daughter relationship a pregnancy that was unexpected, the death of an infant. I think it’s the contrast between the toughness of life with the beauty of heaven that makes the book interesting.

The last book was made into a TV movie with Jon Voight. Are there plans in the works for a film adaptation of the new book?

Actually the rights to the “Five People” one are now available again as well and so we’re exploring doing both of them together in maybe some kind of series format or a streaming thing where we can connect the story over a longer period of time.