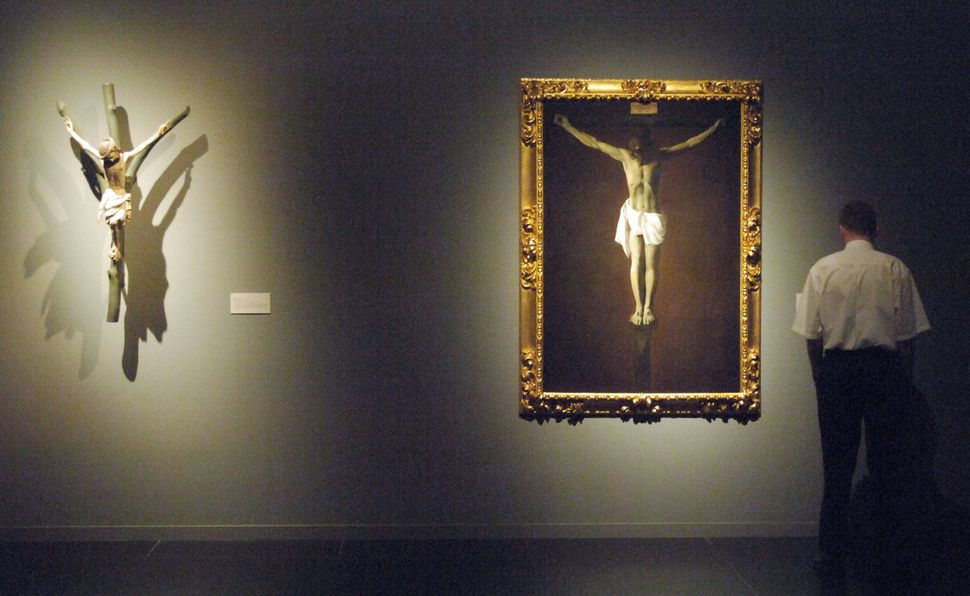 Comedians often zero in on the Trump Administration’s tendency to depict victims as tormentors — and tormentors as victims. That’s how the #MeToo movement became a referendum on the rights of white men, the “sons” and “husbands” who could be accused at any time for no reason. Now we’re seeing a rewrite of the story of the crucifixion of Jesus, and we should pay attention.

As The Washington Post observed, on Fox News, “rhetoric has gone from partisan to biblical about the stakes” of the Kavanaugh confirmation.

“Crucifixion was an important event because it was designed to establish a wall between justice and mob rule — Christ died so that the mob wouldn’t survive,” Fox News anchor Greg Gutfeld said this week.

He added that when it came to Kavanaugh, Democrats “decided to crucify someone once again.”

Jewish history is pretty clear about the consequences of being placed in the role of “the killer of Jesus.”

“It was a constant focus in Italian painting,” according to a summary from the Metropolitan Museum of Art, which mentions towering examples from El Greco to Raphael. Now, we have Fox News painting Justice Kavanaugh as Jesus — an unexpected addition to the iconic imagery.

The words describing the reason for the crucifixion are also undergoing a dramatic change. Here, for instance, is 1 Peter 3:18:

“For Christ died for sins once and for all, a good man on behalf of sinners, in order to lead you to God.”

Sure, there is a chill in noticing “good man” here and how often it appears in recent Republican rhetoric, and maybe a thrill in the comedic potential of Kavanaugh as Jesus. But the Fox anchor’s idea of crucifixion as a “wall between justice and mob rule” makes a few things very clear.

For starters, it’s another variation on the theme of building a wall between us and them. It’s also another assault on truth: “mob rule,” though right now Democrats control nothing —not the Presidency, or Congress, and certainly not the Supreme Court.

The word rule is also chilling. To anyone familiar with anti-Semitic tropes, rule is eerily similar to that canard that Jews rule the world. Its echoes can be heard today in the idea that Jews control media or Jews rule the banking system, or lately, the idea that George Soros, who is Jewish, controls protests, supposedly paying protestors.

But the most important sentence in the Fox news anchor’s statement is this: “Christ died so that the mob wouldn’t survive.”

That’s the sentiment, and that’s what will matter beyond the confirmation of Kavanaugh.

For those needing a translation, “mob” means the sexual-assault survivors asking a senator in the elevator to look them in the eye, not the “mobs” at Trump rallies who kept journalists in pens, or neo-Nazi white supremacists with torches screaming Jews will not replace us! in Charlottesville, where Heather Heyer was murdered.

“Mobs” are the very opposite of the “good people” who believe in “innocence before proven guilty” yelling Lock her up!

Fox anchor Greg Gutfeld — who described himself as a former altar boy who is now non-religious in an interview with the conservative news site The Blaze — isn’t making us work too hard to understand this re-framing of the crucifixion.

Forget about the Jesus “who died for sins once and for all” in 1 Peter, the Jesus who inspired El Greco and Raphael.

It’s not really about Jesus, or sins, but about the other side. And most importantly, it’s about making sure the other side wouldn’t survive.