Has Haruki Murakami Written His First Jewish Novel? Kind Of. 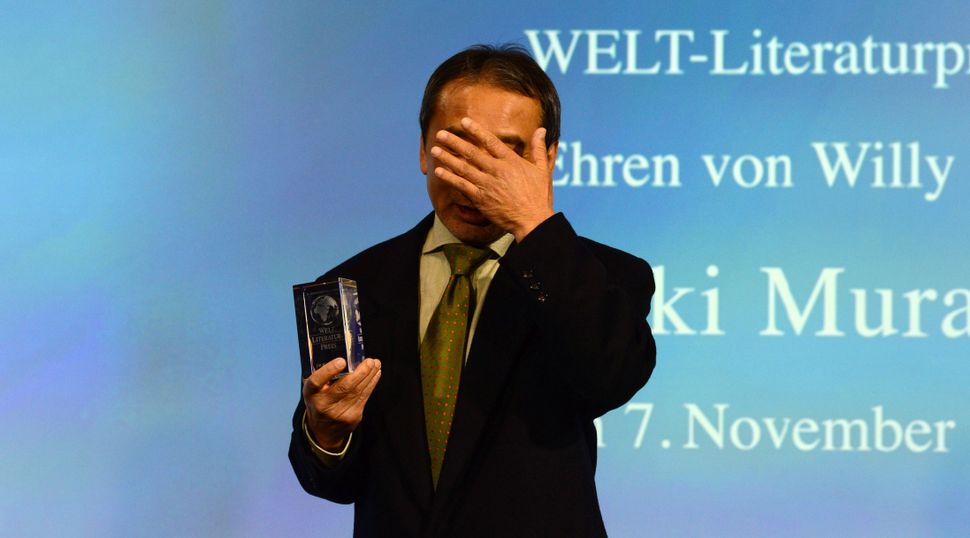 By Haruki Murakami, translated by Philip Gabriel and Ted Goossen

Around the time of the Anschluss, the 1938 Nazi takeover of Austria, a famous Japanese painter living in Vienna is entangled in an abortive assassination plot. His girlfriend, a resistance member, is captured, tortured and killed by the Nazis. But the artist, Tomohiko Amada, protected by his celebrity and the Japanese-German alliance, is spirited back to his native Japan. There he paints an extraordinary masterpiece encapsulating his experiences in Vienna and hides it away in his attic.

Decades later, the painting — the titular “Killing Commendatore” — is discovered by another artist, the novel’s narrator, who is living in Amada’s secluded mountaintop house. That discovery, in turn, unleashes a series of fantastical events that eventually helps close the circle of the narrator’s life. A best-selling and prodigiously translated Japanese novelist, the Kyoto-born Haruki Murakami is a past recipient of the Hans Christian Andersen Literature Award, bestowed on masters of fantasy, magic realism and similar literary genres. His latest fiction (my first encounter with him), “Killing Commendatore,” turns out to be an often enthralling, sometimes frustrating mix of straightforward narrative, philosophical rumination and fantasy, leavened by a dry wit.

Murakami’s concerns encompass the porous boundaries between dream and reality, the transformative power of art, and the persistent traumas of Japan’s (and Europe’s) bloody 20th-century history. It helps that he is an accomplished storyteller whose fictional worlds are painted with meticulous detail and whose narrative remains psychologically penetrating even when it veers – wildly and unexpectedly — from conventional realism.

After his sojourn in Europe, we’re told, Amada, for reasons unknown, abruptly changed his painting style — from Western to more typically Japanese. Murakami signals his own fascination with Western literary (as well as musical) influences by having his narrator cite Dostoevsky, T.S. Eliot and Edgar Allan Poe, among others. Poe’s wry voice, unreliable first-person narrators, melancholia and penchant for horror deeply inform “Killing Commendatore,” which even features a magical pit (no pendulum), a horned owl (rather than a raven) and a nocturnal ringing bell (instead of a mysterious tapping). Murakami’s narrator, in mourning over his wife’s abandonment, is afflicted with claustrophobia, a fear he must overcome in the course of his odyssey. The novel’s fantasy elements also recall both “Alice in Wonderland” (there’s even a Cheshire cat reference) and C.S. Lewis’s “The Chronicles of Narnia,” with their passageways between the real and fairy-tale worlds.

After driving around the countryside for months, the narrator seeks a place to nurse his emotional wounds. His close friend from art school, Masahiko, happens to be the (far less talented but amiable) son of Amada. In the throes of dementia, Amada are now languishing in a nursing home. That’s how the narrator ends up in his onetime residence, with its bare walls, collection of old-fashioned opera records and hidden, revelatory masterpiece.

Amada’s paintings “mostly summoned up feelings of nostalgia, gentleness, and peace,” the narrator notes. So to happen upon this extraordinarily violent work, inspired in part by Mozart’s opera “Don Giovanni” and in part (it seems) by Amada’s past, is a shock.

A frequently commissioned portraitist, technically adept but (to his own mind) uninspired, the narrator has stopped painting But then, through an intermediary, a wealthy neighbor, Menshiki, offers an exorbitant fee to have his portrait done, with motives that only gradually come into focus.

When they meet, the narrator senses about Menshiki “something hidden inside him. A secret locked away in a small box and buried deep down in the ground.” The secret, we learn, involves his client’s possible parentage of a young schoolgirl, a happenstance with an odd parallel in the narrator’s own life. The narrator’s married lover suggests that the presence of Menshiki and his magnificent white mansion might augur “the beginning of an amusing fairy tale.” But the narrator, relating his story in flashback, makes clear that his tale will be a far darker one.

Not every reader — at least not every adult reader — will take to the fantastical elements of “Killing Commendatore.” The sudden materialization of the Commendatore figure from the painting, in the form of a 2-foot-high man with a talent for mind-reading and a predilection for voyeurism, is disconcerting, to say the least. That the Commendatore is really (so we’re told) just the personification of an Idea (the capitalization is Murakami’s) won’t soothe those who prefer their realism uninflected by philosophical idealism, let alone fantastical journeys through underground passageways.

Certainly, the history that informs the novel is hardly imaginary. Not only does Amada experience the depredations of the Nazis, but his brother turns out to have been a reluctant participant in the 1937–38 Japanese mass murder of Chinese civilians, which we now call the “Rape of Nanking.” The brother — mistakenly drafted into the Japanese army, unsuited for the brutal demands of war and dragooned into genocide — ends up taking his own life.

In the novel’s prologue the narrator describes an episode with a faceless man and insists on the reality of their encounter. “If this was a dream,” he writes, “then the world I’m living in itself must all be a dream.” In “Killing Commendatore,” dream and reality intersect, merging and influencing each other — to the point where it is impossible to determine their boundaries.

Murakami seems to be arguing for the power of imagination to shape reality — and to help transcend even the most dispiriting of circumstances. “Like a great poem,” the narrator reflects of “Killing Commendatore,” “the painting was a perfect metaphor, one that launched a new reality into the world.”

Has Haruki Murakami Written His First Jewish Novel? Kind Of.