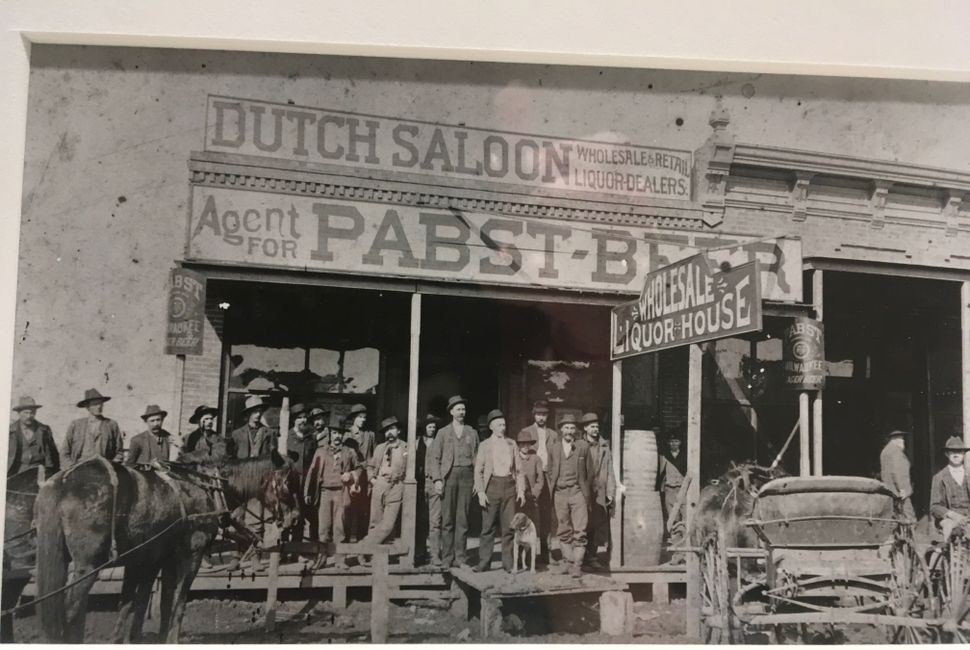 Clear The Saloon: Lexington, Oklahoma, circa 1913. Image by Courtesy of Max Weitzenhoffer

If, as Oscar Hammerstein II wrote in “Oklahoma!”, “the farmer and the cowman should be friends,” a hoedown was probably the least likely place for them to voice their grievances. No matter how catchy Richard Rodgers’ melody for the inviting square dance staged by Agnes de Mille, the menacing menfolk most certainly would have required strong drink while settling their differences — a bright golden haze, indeed.

At least, that’s what I imagine would have happened during the run-up to 1907, when statehood was conferred upon the Territory and Oklahoma officially went dry. “Oklahoma!” – composer Rodgers and wordsmith Hammerstein’s freshman collaboration after separate, celebrated careers on Broadway with other partners – created the R&H brand: they would take us to exotic places – the South Pacific! Austria! Siam! – far from sophisticated, familiar NYC. And what was more exotic to the habitués of Times Square than a prairie outpost in the American West?

Here were cowboys and farmers living hard lives, struggling to tame the land (usurped, yes, from Native Americans confined to their own Territory). Director Daniel Fish’s revelatory revival, currently running at St. Ann’s Warehouse in Brooklyn, strips away much of the show’s traditional frou-frou to dig deep into the roiling, contradictory souls of cowboy Curly, his would-be girl, Laurey, and her secretive ranch-hand, Judd. And as tensions rise between factions, I found myself wondering: Where’s the saloon?

The answer came in a surprising email from my friend Max Weitzenhoffer, a longtime producer and London theater owner who rarely mingles these days with the Manhattan swells. His producing ventures include “Dracula” with Frank Langella, “The Will Rogers Follies,” and a revival of “A Little Night Music” that brought Catherine Zeta-Jones to Broadway. Since 2005, he’s served as chairman of Nimax Theatres with his British partner, Nica Burns. They own and manage six West End houses, including the Palace, Lyric, Apollo, Garrick, Vaudeville and Duchess theaters.

When not in the UK on business, however, he can be found at home in his native Oklahoma. After I told him about the revival, he sent me this photo and a one-line caption: “My father, 1913, Oklahoma, born in Indian Territory.” 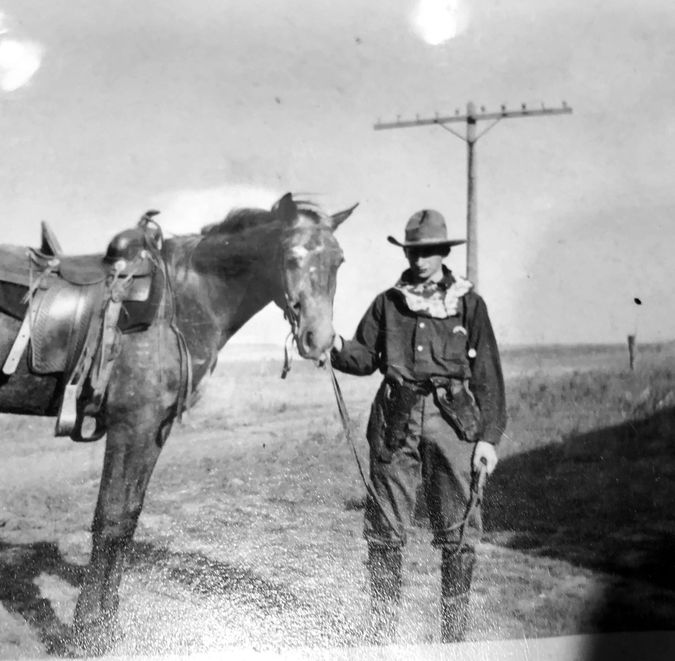 OK, so he’s not exactly Curly McLain. He’s not even Gene Wilder in “Blazing Saddles.” But this picture, of a real Jewish cowboy against this desolate landscape more than a century ago, demanded further investigation. I demanded more information. A few days later came a second email from Max and another extraordinary photograph: 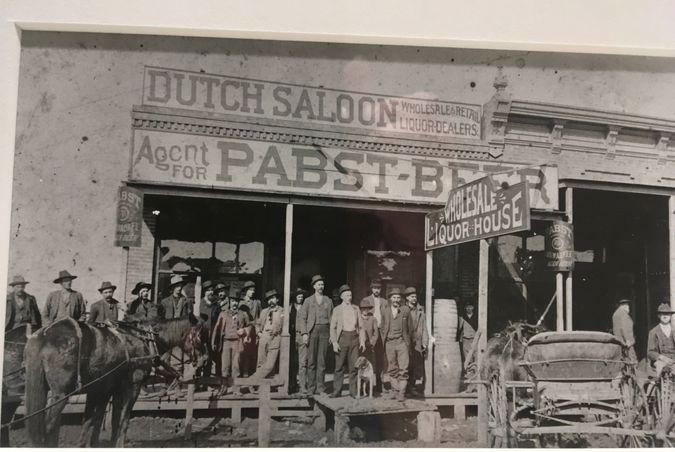 Clear The Saloon: Lexington, Oklahoma, circa 1913. Image by Courtesy of Max Weitzenhoffer

I had found my Oklahoma cowboy and his immigrant father’s saloon, in the Canadian River hamlet of Lexington (1900 pop: 861), about 38 miles south of Oklahoma City. Lexington was a “whiskey town” whose patrons crossed the river via toll bridge from Purcell, a railroad stop in alcohol-free Indian Territory.

In 1885 Bert Weitzenhoffer and his wife “came from a small town in Hungary near Buda-Pest,” Max, who is 79 years old, told me in a telephone interview from his home in Norman, Oklahoma. “He came with his brother. They stopped in St. Louis and he came directly to the Territory. His brother didn’t want to come and they never spoke to each other again. The area was settled mostly by Germans. It was very small. And it was pretty wild and wooly around here in those days. In Lexington, there were probably shootings every night. Everybody carried guns.”

The family members were secular, Weitzenhoffer recalls, as were the other mitteleuropean Jews who were heading West. “There was a big migration of prominent Jewish families that have been here since the Territory days. There wasn’t any religion around here. They would bring in a rabbi for weddings, but that was it.”

Bert had a small ranch near the town. But in 1900, he and a German partner named Turk opened the Territory’s first and biggest legal distillery and saloon. Weitzenhoffer-Turk Distributors turned out 70 gallons of liquor every day to supply the saloons and brothels that lined the riverfront and led into town. It was not fancy. “There was no plumbing,” Weitzenhoffer said. “The only thing you could eat was what you killed or bought. My grandmother would go out back to cut a chicken’s head off for dinner.”

Weitzenhoffer & Turk also financed the bridge that brought the patrons over from Purcell, charging a nickel if you were walking, a dime on horseback, and a full two-bits if you were riding a bicycle, the premium meant to discourage bikes, which frightened the horses, according to a local historian. They were better at booze than breeding cattle or farming.

“My grandfather was only briefly cowboy,” Weitzenhoffer told me. “And between you and me, I think he was not that fond of horses.”

Turk brought in talent from Kentucky to make the whiskey, which was trademarked with the U.S. patent office. Business was booming, until 1907.

“When Oklahoma became a state, we went dry and it put everybody out of business,” Weitzenhoffer said. “That’s when my dad found himself having to work his way through high school.” Eventually, he went to work in the new industry that brought another, bigger boom: Oil. Max’s father became wealthy, starting out as a wildcatter riding the prairie for land that held the promise of gushers. He married a wildcatter’s daughter from Wichita who’d gone to Wellesley College, back East.

“My father was active in the oil business and head of the Selective Service,” recalls Weitzenhoffer. “We were very comfortable in Oklahoma City.” 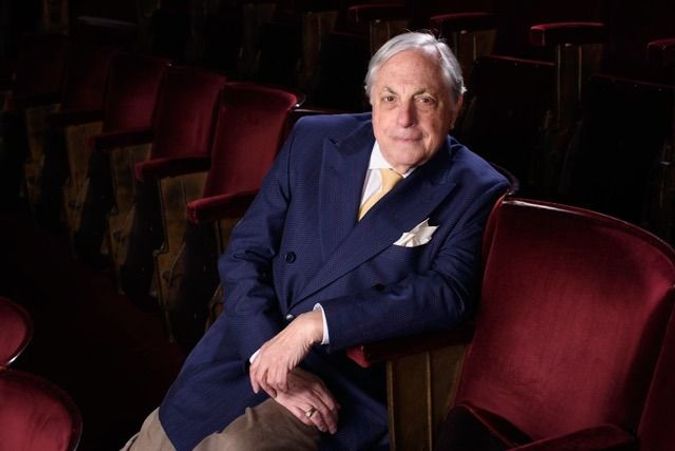 It will come as no surprise that Max Weitzenhoffer professes an emotional, home-state connection to the show that launched Rodgers & Hammerstein. His father was president of their congregation in Oklahoma City. When Max was a young man, the family vacationed in posh La Jolla, where he fell in with the crowd at the famed La Jolla Playhouse, eventually becoming its manager. He has been a major benefactor of his alma mater, OU, where the family name is prominent: there’s the Weitzenhoffer Family College of Fine Arts; the A. Max Weitzenhoffer School of Musical Theatre (which he founded; his first name is Aaron); the Weitzenhoffer Theatre; and the Weitzenhoffer Collection of French Impressionism in the school’s museum.

“You know,” he said, “when the government wanted to make ‘Oklahoma!’ the state song, one of the negative comments from one of the Oklahoma legislators was, ‘How can two Jews from New York know anything about Oklahoma?’”

They knew enough. Except for the part about the saloon.

Jeremy Gerard has been writing about culture and politics for many publications, including The New York Times, New York magazine and Vanity Fair, since 1977.