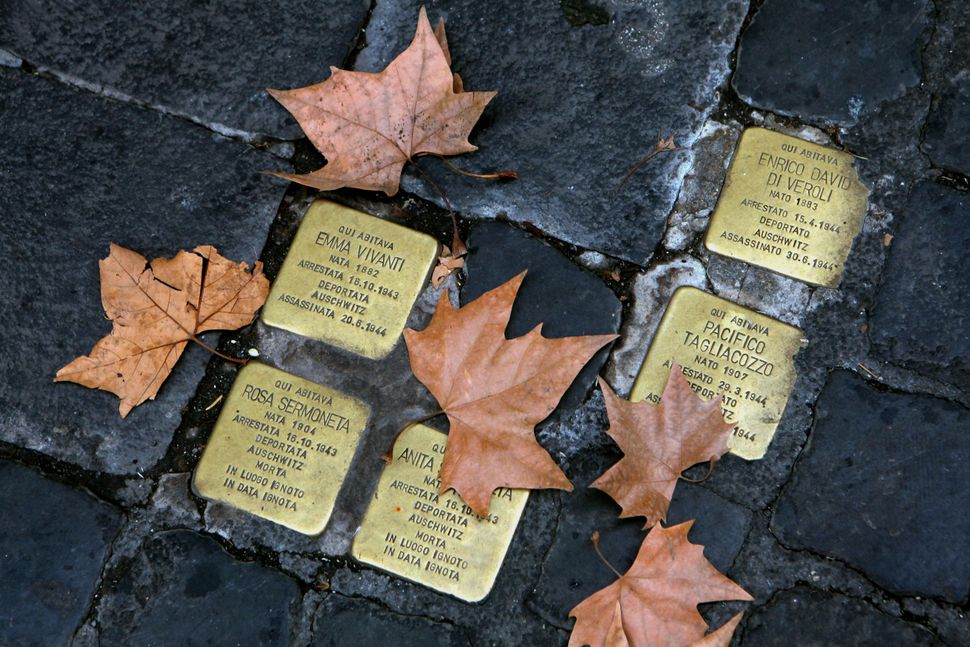 For 87 years, Signora Speranza Sonnino has awoken to the sounds of the ghetto. Located on the banks of the Tiber near the city center, this area takes it name from the 300-plus years in which the Jews of Rome were penned in here by Papal decree. When the walls of the ghetto had been smashed down but its homes were still full of poor Ebrei Romani, Speranza heard the creaking wheels and hollers of street hawkers. These days, she hears tour groups and the clack of restaurant chairs being set down on the ancient cobblestones. But at 5:30 in the morning on October 16th, 1943, she was awoken by a pounding at the door, and a voice shouting for her mother: “Elisabetta, Elisabetta, get Umberto out of here! The Germans are coming for the men!”

Umberto, Betta’s husband and Speranza’s father, had already gone into hiding. Like many Roman Jews, the family had assumed that the Nazis would arrest only adult men. Fifteen minutes later, the voice returned. “They’re taking the kids and the old people too. Run!”

Elisabetta prepared her three children to leave the house. Not that there was much to do — the family was so poor that they didn’t own suitcases. Before descending the stairs, though, Elisabetta tidied the house one more time. She didn’t want any intruders to think they were dirty.

They went down the stairs and opened the front door. The Catholic proprietress of a neighboring restaurant motioned for them to wait; the Germans were nearby. They waited, walked outside, and turned a corner and saw four tall, big-shouldered SS soldiers standing there. This was certainly the end.

But the soldiers looked at them and went on their way. Without bags, the Sonninos didn’t look like people who were trying to escape.

“I thank God now that we were so poor that we didn’t have suitcases,” she says. “Otherwise the Germans would have taken us. All of my friends from school were killed. All of them.”

We’re sitting at a table in her son’s restaurant on the Via Portico D’Ottavia, the main — really only — drag of the Roman ghetto, directly below the apartment in which three generations of her family lived before her, and just a few feet from the ancient arch that gives the street its name. Her hair is dyed dirty-blond and she wears pearls and a turquoise jacket.

“We didn’t deserve what happened to us,” she says as tears course down her high cheeks. When she says “us,” it’s clear she means all the Jews of Rome.

The Germans had occupied Rome since September 11th, 1943, having swept in while the post-Mussolini government was stalling on a deal with the Allies. Under Italian fascism, Jews had suffered racially-discriminatory laws, but avoided death. On October 16th, 300 SS troops and 20 Italian police officers, under orders of Commander Herbert Kappler, began a coordinated roundup of Jews. 1,024 were captured that day, herded next to the Portico D’Ottavia, before being deported to Auschwitz two days later. Over the next 9 months, 993 more Jews would be deported. Thousands more, including the Sonnino family, survived by hiding, and they and their descendents form a large part of Rome’s iconic Jewish community today.

For many American Jews, the Holocaust narrative is one of near-total destruction followed by blissful exile. European, mostly Ashkenazi, Jews survive the Nazis and moves on to better, safer lives far away in America and Israel. In Rome, the narrative feels different. Rome’s Jewish community is the oldest in Europe, and traditionally is composed of Italkim Jews (those who have resided in Italy since ancient times), with an influx of Sephardic Jews after the Spanish Inquisition. They have developed a distinct cuisine and dialect and liturgy. After the war, most survivors stayed in Rome, moving to newer neighborhoods outside of the ghetto. There was an influx of Jews from other Italian cities, then thousands from Libya after the Six-Day War. The city is both a cherished home and the site of their darkest hour, a dot on the map of a Pan-European tragedy that still feels uniquely their own. They are Italians, who were once victims of their own government and alternatively helped and hurt by their fellow citizens.

“Italy, as a country, did not do nearly as thorough of a job of facing up to its own responsibility, as, say, Nazi Germany did,” says Alexander Stille, journalist and author of “Benevolence and Betrayal: Five Italian-Jewish Families Under Fascism.” “Italy was in the odd position of having — sort of — changed sides in the middle of the war, so afterwards many Italians wanted to believe the comforting narrative of ‘We were really anti-fascists, we fought on the side of the Allies.’ It allowed people to forget… that although the Italian racial laws weren’t quite as horrible as the Nuremberg laws, by having created a whole system to track and register Jewish citizens, that made it much easier for the Germans to round up people later on.”

Riccardo Piazza, nestled on the couch in his apartment in southern Rome, normally takes awhile to answer questions like this. At 90, his memory is starting to fail, something that troubles him greatly. Even when it’s clear, he chooses his words carefully, munching meditatively on a cookie, before speaking and then quickly doubling back to clarify. To my question, though, his answer is quick and almost dismissive.

“The Italian government did that to us, not Italy.”

Signore Piazza eats prosciutto, doesn’t keep Shabbat, wouldn’t really know how to do Shabbat even if he wanted to. But he knows himself as a Jew; a Roman Jew, and an Italian. The Holocaust didn’t make him feel less Italian, and it strengthened his connection to the long-suffering global Jewry.

“You’ve got to understand, I wasn’t appreciative in that moment, when my older brother came out of hiding, returned home and told us to run,” he says. “I was a stupid kid, I didn’t understand anything. The family next door, our relatives, sixteen of them were deported. None of them came back.”

“Even after 75 years, I still haven’t quite come to terms with the seriousness of what happened,” he say, shaking his head. “Sixteen people, can you imagine?” His voice trails off.

If the survivors grapple with memories of that day, the new generation grapples with how to remember it. Luisa Basevi, a friend of mine, works as a teacher at Renzo Levi, a Jewish high school in the ghetto. She allowed me to spend a morning with her students, all Jews from Rome. They’re a representative mix of modern Roman Jewry. Some have classic Roman-Jewish names like Di Veroli and Spizzichino. Others are Libyan, or have Northern Italian or Eastern European ancestors, or an Italian parent who converted. “Does any Jew ‘own’ the memory of October 16th more than another?” I ask them.

“Well, it obviously means more to Jews in Rome,” says one male student. “If you visit concentration camps, you’ll maybe understand the Holocaust as a whole thing. But October 16th happened here, and it means more to you if you’re from here, and had relatives who survived it.”

“I think the exact opposite,” a female student replies. “We’re all Jews. Visiting the camps and visiting the ghetto only makes you understand each one better.”

So, I ask, if an American-Ashkenazim went to the Portico D’Ottavia, and said “This touches my soul as strongly as any other Jew,” would that be believable?

“No, not at all,” says one Roman girl. “If you have relatives who survived October 16th, who felt fear and sadness that day, who’ve talked about it to you, that’s in your blood.”

“My grandfather fled from Tripoli, he saw unthinkable things, people burned alive in their businesses,” says another Libyan girl, born and raised in Rome. “But I don’t feel that as strongly as I feel October 16th. Walking these streets, seeing the plaques … it’s just different.”

“I’m a Jew, and I was born in Rome,” replies yet another. “But my Grandfather is from Trieste, and survived those deportations. When I think about the Holocaust, of course I think about October 16th. But Trieste will always be my point of reference.”

This October 16th, as always, there was a silent march through the Ghetto, and a reading out-loud of all 1,024 names. In 25 years, when all the survivors have died and these kids are the parents of a new generation, there are some, both inside and outside the Jewish community, who worry that the memory of October 16th will become like so much else in Rome — history, preserved in books and museums and the unfeeling stones of monuments. How can one truly remember that which has no witnesses? The literal memories of survivors, those still-painful recollections of fear and uncertainty, are owned by and will pass with them. But what they leave to their descendants — to all of us, really — are not memories, but the desire to reckon with what happened, the magnitude of which grows, rather than diminishes, with time. On the morning of October 16th, 1943, a terrible thing happened to people. Over time, we realize that it also happened to generations, to a religion, to a people, to a community, to a place itself.