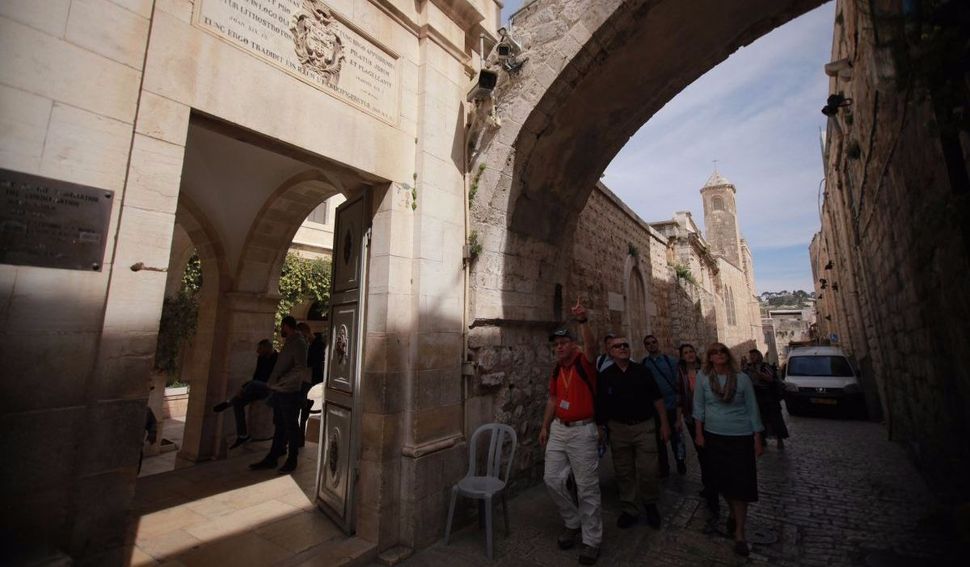 In June the first Israeli exhibit devoted to the life of Jesus of Nazareth opened at the Terra Sancta Museum in the eastern part of Jerusalem’s Old City. But while visitors might expect remnants of the True Cross or other props from the Passion, this exhibit, “Daily Life at the Time of Jesus,” has a more quotidian concern.

With the exhibit the museum is aiming for a broader appeal that transcends religious divisions. Hyperallergic reports in an article from October 10, that the display includes secular artifacts like combs and coins as well as more Jewish items like ceremonial basins. Still the grounds of the museum, an annex of the Monastery of the Flagellation established by the Franciscan Custody of the Holy Land in 1902, make it an unmistakably Christian endeavor. The museum’s director, Father Eugenio Alliata, is a Franciscan friar and professor of Christian archaeology.

Part of the museum’s project is to prove the historicity of Jesus by connecting artifacts, many recovered by the Franciscan monk archaeologist Virgilio Corbo, to accounts from the Gospels. Hyperallergic reports that fishing net weights from the Second Temple Era are said to be from the apostle Peter’s house and are presented alongside verses from Matthew. The location of the museum on the Via Dolorosa, the path where Jesus is said to have carried his cross to the site of his crucifixion, also links the museum to the New Testament.

While the exhibit marks the first time artifacts of this kind have been displayed outside of the Israel Museum and, Haaretz reports, the first time in modern Israeli history that a museum has hosted an exhibition devoted to the day-to-day life in the Second Temple period in Jerusalem, frictions about the display’s legitimacy appear to be emerging. Hyperallergic reports that the Israeli Ministry of Tourism has not yet endorsed the exhibit and it is not included in their official itineraries. Sarah Cibin, a project manager for Terra Sancta told Hyperallergic the impasse is the result of the Catholic Church, which oversees the museum, and the State of Israel failing to reach an agreement as to its official status. The tension has been compounded by recent Israeli efforts to collect income tax from church-owned properties in Jerusalem.

But the “Daily Life” exhibit appears to have historical significance to the Jewish State, with parts of its building dating back to the reign of King Herod. Haaretz reports that among its collection are items recovered from Machearus, a fortress in Jordan in which first century Jews barricaded themselves during the First Jewish Revolt. (The Haaretz article notes the importance of the site for Christians stems from it being the location of John the Baptist’s imprisonment and execution). And because many of the artifacts including pottery, arrowheads, gaming dice and statues, several of which are being displayed for the first time, are not explicitly pegged to Christianity, they offer a glimpse at the way the people of the era lived. It’s still a part of Jewish history, even if the premise of the display and its curators are Christian.

“The uniqueness of the Holy Land is that it’s a supporting pillar for a vast space of knowledge, encounter, and dialogue between cultures,” Father Francisco Patton, the Custos (or chief Franciscan cleric) of the Holy Land said at the museum’s inauguration this summer. “The opening of the new museum is an incredible opportunity to realize the vision of peace in a country that’s still finding its way toward peace.”