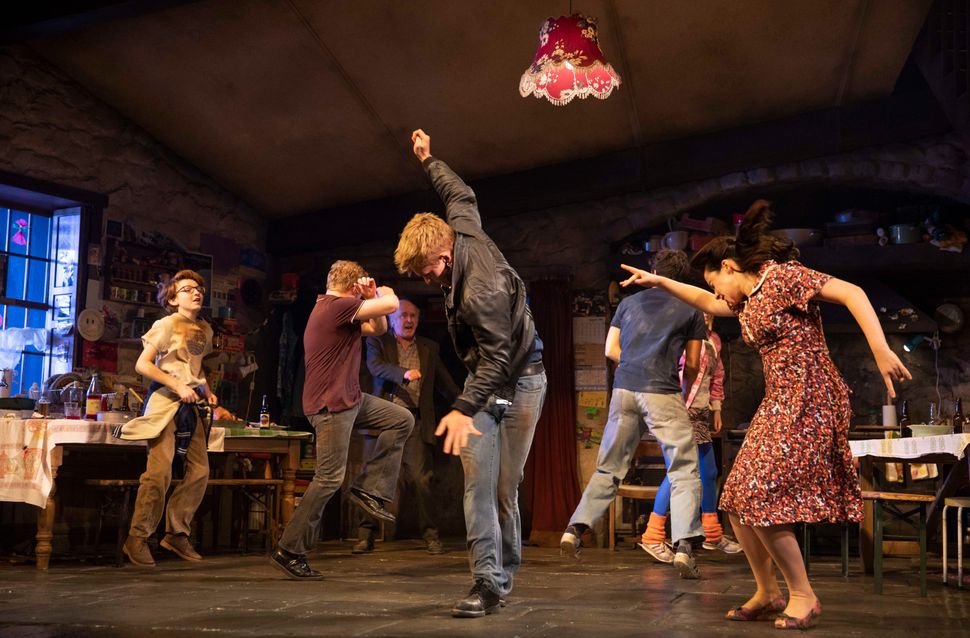 From generation to generation, family wounds re-open. Stories pass on from elders to rapt youth with the ring of truth, the air of prophecy or the bitter tang of regret. The youth of today grows up into its adult responsibilities toward a homeland — one riven by 70 years of war and occupation — that longs for recognition and peace.

There’s nothing Jewish about director Sam Mendes’s new show about Troubles-era Ireland on Broadway. But, as with all world-class drama, “Ferryman” has universal themes, some of which strike close to home.

Most famous for “American Beauty” and two James Bond movies (“Skyfall” and “Spectre”), Mendes has been widely applauded for his directorial work on the stage. Working from the Donmar Warehouse theater in London he’s been almost infallible in bringing new plays and old to critical and popular acclaim in both London and New York. In this first American production of Jez Butterworth’s “The Ferryman,” Mendes hits another timeless note.

Taking its title from Virgil’s “Aeneid” (“Book Six” so Uncle Pat tells us), “The Ferryman” unfolds on an Irish farm run by the large, garrulous Carney family. It’s set, mostly, in County Armagh, Northern Ireland, August 1981, just as Irish hunger strikers in British prisons are dying for their political beliefs. It’s harvest time on the farm, and the extended family is about to take in its crops for another year, but there are more bitter crops to reap than the barley from the fields.

At the opening of “Hamlet,” two men discuss the king’s ghost while guarding castle battlements. “Macbeth” opens with the witches conjuring evil spirits to divide a kingdom. At the opening of “The Ferryman” two IRA guards announce, in couplets, the approach of a priest to whom they will reveal a kind of ghost — a body that was planted in the ground 10 years earlier.

From this self-consciously Shakespearian opening, Butterworth distinguishes his work from that of the Bard. “Ferryman” is not in rhyme nor is it about the politics of state, rather it’s full of Irish-inflected f-words and the politics of family. Its subjects are apples, geese and farmers, not courts and kings. Monologues from the aptly-named Aunt Maggie Far Away are reminiscent of those of the Englishwoman in Tony Kushner’s “Homebody/Kabul” and, like Kushner, Butterworth adds notes of the fantastic to create a world where the personal is inescapably, physically political but where the tragedy is visited on the bodies of innocent unknowns.

Over three absorbing hours Butterworth’s play provokes and explains. Through the Carneys’ arguments and passions we experience the joy and pain of a family who stand on terrible fault lines: straddling different types of belonging, feeling irreconcilable loves, caught between different types of action, and shouldering incompatible burdens of responsibility.

At the heart of the play are Caitlin (Laura Donnelly) and Quinn Carney (Paddy Considine). “Ferryman” is partly based on Donnelly’s own story in which an uncle who died in a “car crash” was found to have been “disappeared” by the IRA. The body of Seamus Carney, Caitlin’s husband, has been found in the peat of County Louth. Since his disappearance — assumed to be related to rumors that he informed on the IRA — Caitlin has been living with Quinn on the farm with her son, Oisin.

The action revolves around these two who put on a brave face for the family. Like the solid wooden table that sits in the middle of the stage for hours, Considine’s tortured steadfastness dovetails with Donnelly’s domestic sturdiness and emotional desolation to provide a daily basis for life in the midst of despair.

Having his younger brother’s son and attractive wife around his own multigenerational family is complicated for Quinn, and for his wife Mary. I use the word “complicated” rather than describe the powerful complexities so as not to spoil for future audiences the play’s onion-peeling of familial relationships and the feelings of desire, regret and guilt that accrue from that triangle.

The larger family also includes an older triangle — the siblings Aunt Pat, Uncle Pat and Aunt Maggie Far Away who bear witness in turn to historical, timeless and magical Ireland — as well as a slew of children. The offspring range from teens straining at adulthood down to 9-month-old baby Bobby.

The baby is auspiciously, or ominously, named. The wall in front of which the play opens, is daubed with Republican graffiti including, centrally, a large “Bobby” painted onto it. The explicit reference is to Bobby Sands, the IRA martyr whose words are quoted approvingly by the family:

“They have nothing in their whole imperial arsenal that can break the spirit of one Irishman who doesn’t want to be broken. I am hungry only for justice.”

Anton Chekhov’s maxim that a gun hung on the wall in Act I must be fired in Act II is observed at all moments. Stories, events, opinions and objects are constantly “hung on the wall” by the dialogue — to be revisited sooner or later. With so many characters wheeling around the stage there is always a “gun” being hung and a “gun” being fired.

Mendes and the cast have perfected the dramatic ebbs and flows of a large family as it streams through the front room of the farm with its attendants and guests. We are caught by the hubbub, by the silences, by the quiet rapt addresses, by the passionate speeches and the soliloquies. We are constantly surprised, often given a temporary catharsis of laughter but this “Ferryman” never excuses us from the tension that comes from the unburied body of Seamus Carney.

The dimensionality of the family and the echoes of its pain grow as a trio of boys, the Corcoran cousins, come in from the city to help with the harvest. Who belongs with whom? Whose side to take when there are so many right sides? The arguments Shane Corcoran has with the older Carney boys resonate with the echoes of imagined conversations between Seamus and Quinn. In barely three expansive scenes we have traversed, compared and experienced three generations of struggle that intertwine and stretch from 1916 to 1981 through the Carney family. Through, it seems, the whole of Northern Ireland.

Whether “Ferryman” stands the test of time remains to be seen, but it’s undeniably the work of a contemporary maestro and, though it has a distinctive voice, it jostles with both ancients and moderns. There’s a feeling of “The Cherry Orchard” except with the spent force of Russian nobility replaced with a vibrant growing family. The forces of modernity as expressed by the pop music and fashion of the city, the violence of the IRA, the oppression of the British occupation, are they inexorable?

The past is yearning to be told, but the present is not strong enough to take it.

Bobby Sands is dead. Long live Bobby Carney. A slainte to his world, whatever that world turns out to be.