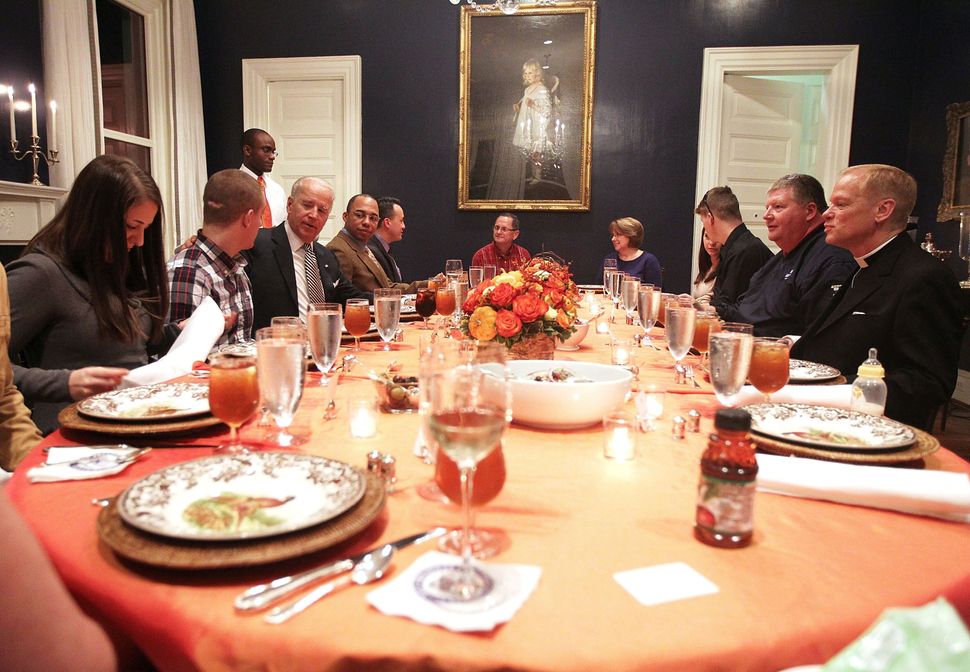 I’d be surprised if anyone’s Thanksgiving ever looked like Norman Rockwell’s iconic Saturday Evening Post cover. Even if you Photoshopped in some diverse complexions, it’s the harmony of the gathering — its radiant togetherness — that makes it seem so unearthly. Where’s the divorcing couple insisting that you take a side? Where’s your drunk uncle taking Trump’s side? That’s more like reality, and it’s enough to sour the cranberries.

Apprehension about Thanksgiving’s minefields isn’t an unwarranted dread. We are a more polarized people than ever before. Normally, distance makes for a peaceful family, but at Thanksgiving distance is removed, and so is peace. Family fights can reveal horrifying differences about values, truth, even reality. Worse, they’re a total waste of time. Never in human history has throwing the candied yams changed anyone’s mind.

Some tribes contain fewer outliers than others – mercifully, I’d say, but that’s because, like everyone else, I’m convinced my side is right. I don’t know of Kavanaugh-lovin’ Kaplans, but if there were any, I’d never be short of excuses to avoid a long Thursday (and maybe a Black Friday) in November with them, and I bet they’d feel the same about me.

It’s not that I want to spend Thanksgiving in the Resistance locker room. Even if I were surrounded exclusively by my team, I’d rather put a fatwa on daily politics, turn Twitter off and give the Mueller mulling a rest. Family, friends, gratitude for our bounty and for each other: That particular cup runneth over, and it would be a tragic waste of grace to handicap the 2020 primaries or make book on how long Kellyanne and George Conway will last.

I want Thanksgiving to celebrate America’s origins and aspirations. I don’t discount the symbolic contribution that Pilgrim-hat-and-Indian-corn centerpieces can bring to the occasion, but Hallmark history can take things only so far. What about including our hallowed civic texts? Our songs and poems of freedom? Our unfinished agenda? Independence Day prompts patriotic reflection and emotion, too, but there’s potential for something intimate, even reverent, in the Thanksgiving ritual that picnics, parades and fireworks can’t quite capture.

To make room for that, what if we agreed to some ground rules in advance? No Current Events might be a good one. And: No Did-You-See-What-Trump-Just-Did? The goal is to find an oasis from the news cycle, and to assume the best about each other. We’re not looking to win fights, but to find common ground. Each of us brings our own story to the table; each of those stories is woven into the American story. Can we find a narrative about ourselves and our nation that includes us all?

A template for that intent is the Passover Seder, whose purpose is to recount the story of the Hebrews’ exodus from Egypt and to pass it on to the next generation. With no one yelling that the Pharaoh was right, the Seder gets us to dwell on our founding moment as a nation, fleeing persecution, finding liberty and what that instant means for us from generation to generation.

In the days after Sept. 11, 2001, Thanksgiving Haggadot — responsive readings and discussion guides to America’s origin story — began to appear. Some texts that are included in one of them: the Declaration of Independence and the Mayflower Compact; the lyrics to “This Land Is Your Land” and “America”; and the Five Questions, modeled on the Seder’s Four, concluding with, “What do we believe are the highest ideals and best values of the United States?” and “Have we, as a nation, lived up to those ideals and values in the past year?”

I acknowledge that what makes me want to introduce questions like those into a Norman Rockwell setting is my despair at how those ideals have suffered these past two years, and my hope that an end to that assault may somehow come into sight. I want relief from my fear that democracy and dignity are in retreat, both in America the Beautiful and around the world.

It may be fantasy for me to think that Thanksgiving guests can chew on questions like those, yet avoid sounding like cable news yakkers. But imagine if everyone came to the table with the intention — the kavanah — to make the meal an American Seder. The challenge is to ask the questions non-judgmentally, to get to shared beliefs and see whether and why they were right. Here, for example, paraphrased and compressed, are the Four Questions in the Thanksgiving Seder of the Jewish Learning Center of New York:

Questions like those don’t politicize the holiday – they raise its civic stakes. I’m as alarmed as anyone by Trump’s odiousness. But I’d gladly give my rage a rest — a tryptophan nap — for a chance at saving our American Dream. Even if it’s one table at a time.