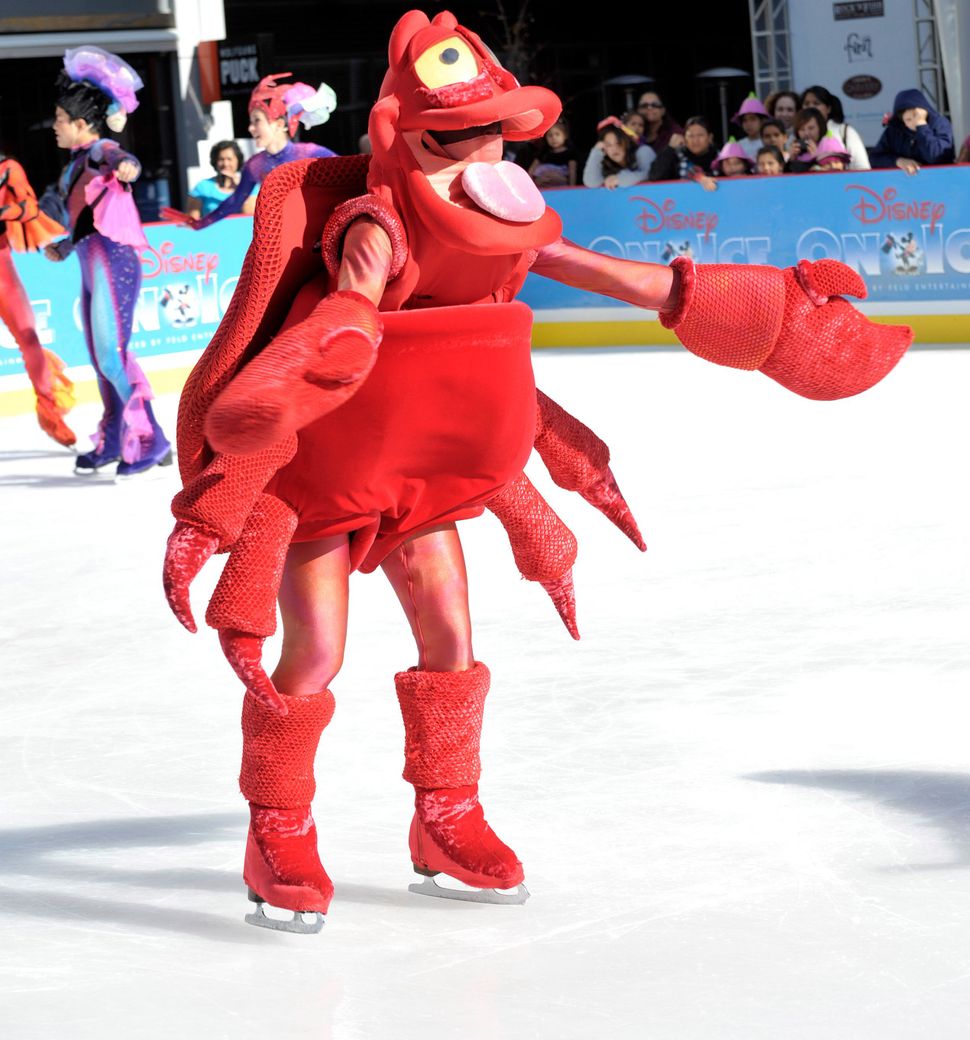 Disney songs are apparently too toxic for Princeton students. Last week the Princeton Tigertones, an all-male a cappella group whose performances for years have featured the Disney movie song “Kiss the Girl,” yanked it from its act after a piece in the student paper accused the lyrics of promoting “toxic masculinity.”

Also last week, the principal of LaGuardia High School for music, art and performing arts in New York — the school where “Fame” was set — ordered Nazi flags and symbols removed from the set and costumes of a student production of “The Sound of Music.” “The hills are alive,” deadpanned the Daily News, “with the sound of political correctness.”

Growing up, my kids wore out the videotapes of “The Little Mermaid” and “The Sound of Music.” Was I a bad parent for letting corporate media inculcate my kids with bad values? Or was I an unwitting tool of the brutal patriarchy?

Or have we all just lost our minds?

Or maybe there’s something to learn from banning crab songs from a Disney animated musical and censoring swastikas from a period Broadway musical about the Third Reich.

In 1988, Jeffrey Katzenberg, the head of the movie division of Walt Disney Studios, asked me to do overnight notes on the script for “The Little Mermaid.” I was then a vice president of production at Disney — I had a great title but was still a greenhorn in the industry, with only a few years’ on-the-job training in live-action features and none in animation. Notes, the bane of a screenwriter’s life, are memos from studio executives noting problems, asking for fixes and pretending that the asks aren’t orders.

Katzenberg had the genius idea that animation was the perfect platform for a new golden age of Broadway musicals. For “The Little Mermaid,” the first of a long run of Disney animated hits, writers John Musker and Ron Clements turned Hans Christian Andersen’s dark fairy tale into a charming romantic comedy, and Katzenberg brought in composer Alan Menken and lyricist Howard Ashman to transform the screenplay into a break-into-song musical.

I had only one problem with “The Little Mermaid,” a plot inconsistency. In the story, Ursula, the sea-witch, makes a deal with Ariel, a mermaid princess. In exchange for giving up her beautiful voice, Ariel gets to take on a human form. The catch: If within three days Ariel doesn’t receive the kiss of true love from Prince Eric, the human she pined for, she would forfeit her land legs and fall forever into Ursula’s clutches. But wait — if Ariel could sign that contract with Ursula, in perfect penmanship, why couldn’t she also write a note to Eric telling him what the deal was? If Sebastian, the Jamaican-accented crab, could sing, “Kiss the Girl” into Eric’s ear, why couldn’t he also clue the prince in about the ticking clock?

I don’t know if Musker and Clements blew off my notes, or if they even saw them, but the script I read was the movie that got made, and I’m unaware of any harm done by that inconsistency to its box office grosses or to its viewers’ subsequent SAT scores. But even if I’d had weeks to find fault with the script, I’m certain I’d never have come up with “toxic masculinity.”

If you’ve seen the movie, you’ll recall the “Kiss the Girl” scene. Ariel, in a rowboat with her dreamboat, has lost her voice, but she looks at Eric longingly, puckering up. Yet the prince is too shy to meet her lips with hers. “Yes, you want her,” sings Sebastian.

Look at her, you know you do
It’s possible she wants you too
There’s one way to ask her
It don’t take a word, not a single word
Go on and kiss the girl

But those lyrics, charged a sophomore in a Daily Princetonian column, “unambiguously encourage men to make physical advances on women without obtaining their clear consent.” She also objected to how the Tigertones have traditionally performed it, which involves inviting a female audience member to decide whether a man from the crowd can kiss her — and there she may have a point. But her critique rests not on its performance, but on how “misogynistic” the song itself is.

“Kiss the Girl,” she wrote, “launches a heteronormative attack on women’s right to oppose the romantic and sexual liberties taken by men.” It implies, she argued, “that not using aggressive physical action to secure Ariel’s sexual submission makes Eric weak,” and “that masculinity is contingent on the domination of women. This attitude can catalyze violent tendencies toward, and assault against, women.”

Thanks to Google, I’ve also learned that the way “The Little Mermaid” valorizes legs over tail fins promotes body-image dysmorphia in girls; that its male characters dominate the dialogue, speaking 68% of the time; and that it “uses the social and historical construct of race to create characters that perpetuate racial stereotypes.” The fish in Sebastian’s Afro-Caribbean calypso-singing fish chorus turn out to have “clearly African-American voices,” their “drooping eyes” and “large lips” making them look like black musicians and singers. So “the only non-white characters in the film… are all lower class with no position of power.”

Is she arguing that Sebastian is a crab of no power, or of dangerously misogynist power?

Entertainment models behavior that can influence audiences. Sexism, racism and plenty of other –isms have cast long shadows on popular culture, and sensitizing ourselves to the politics of our narratives is healthy.

The swastikas on stage and the swastikas in Charlottesville are both symbols. They signify that their bearers are Nazis. But at the Unite the Right march, they were part of their uniforms, not part of their costumes. The reverse is true in the theater. The swastikas there tell stories. They are how Howard Lindsay and Russel Crouse, authors of the musical’s book, depict our imperfect and horrible world. They’re artistic intellectual property: Licensing the show’s performance legally requires the production to include some swastikas, just as it requires its dialogue to be uncensored.

“The Little Mermaid,” like “The Sound of Music,” is also art. The Disney movie and the Access Hollywood tape both offer counsel to heterosexual men. But Sebastian belongs to a long line of characters who give good advice and bad advice to the lovelorn. Trump, though we might wish otherwise, is not an imaginary character; he’s an actual monster, and his advice amounts to rape. Some songs’ lyrics, like Trump’s words, dehumanize and assault women. “Kiss the Girl” is not one of them.

The history of culture includes a succession of OMG moments, when scales fall from our eyes and beliefs that long went unnoticed and unquestioned are revealed as instruments of injustice. Old favorites can age really badly — a prime example: The Beatles’ “Run for Your Life” — and that kind of change can be wrenching. It invites the counter-charge of “political correctness,” which can be a cudgel in the hands of reactionaries, a way to dismiss victims of abuse as snowflakes and crybabies. That’s why I’m loath to use the term.

The concept of sexual consent is a victory for human dignity, and the trauma of the Holocaust runs deep. Still, when PC comes in the context of profound ignorance, it is PC at the expense of truth. And that’s what I’d really call toxic.