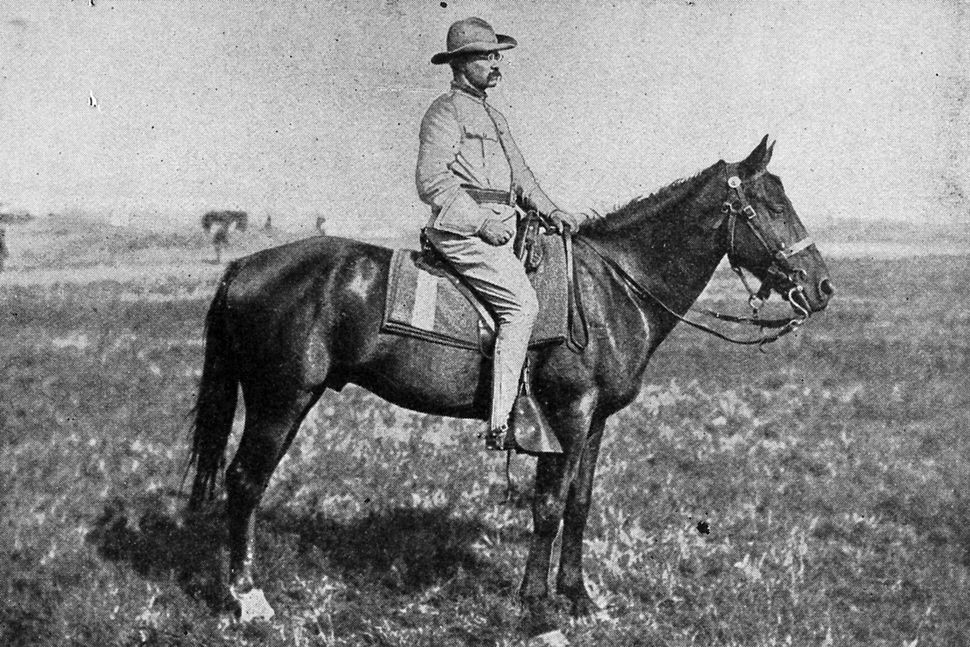 Teddy Roosevelt packed at least three lifetimes into his relatively short one: He died 100 years ago, on January 6, at age 60. Widely regarded as one of the greatest presidents in American history (with a bust on Mount Rushmore as proof), Roosevelt was a bestselling author; a historian; a naval strategist; a conservationist (as well as a mercilessly successful hunter); a war hero; a New York state governor and assemblyman; a New York City police commissioner; a vice president of the United States; an assistant secretary of the Navy; a rancher; an athlete (despite a sickly childhood); a progressive (with both a lower-case and upper-case “P”; a trust buster; the first American to win a Nobel Peace Prize (in 1906), and the inspiration for the most popular stuffed animal in the world. All this, and a friend to the Jewish people to boot.

Roosevelt was the first president to appoint a Jew to a Cabinet position; a champion of Jewish rights at home and abroad, he was a vocal supporter of a Jewish homeland in Palestine; an advocate (mostly) of immigration, based on his firsthand dealings with Jewish and non-Jewish immigrants who had settled in his hometown of New York City, and a defender of Jews in the wake of the Kishinev pogroms of 1903. He even kept two Jewish menorahs on display at his 95-acre estate on the North Shore of Long Island, Sagamore Hill.

Roosevelt’s special relationship with Jews was forged during his time serving as police commissioner in New York City, a post he assumed in 1894. He admired the attempts of immigrants to better their lot through hard work, paying tribute to their physical strength, referring to “the indoor Jew of fine bodily powers who had taken to boxing, wrestling and the like.” (Roosevelt himself had worked hard to transform himself from a weak, sickly child into the rugged cowboy of legend, and he appreciated that effort in others.) In his autobiography, he wrote of having had “experience after experience of the excellent service done — an excellent work needing nerve and hardihood, an excellent work of what I might call the Maccabee-type in the Police Department under me by police officers of Jewish extraction.”

Roosevelt exhibited evidence of the shrewd political tactician he would become while still commissioner when members of the Jewish community asked him to ban rallies featuring an anti-Semitic German preacher, Hermann Ahlwardt. “Of course, I told them I could not — that the right of free speech must be maintained unless he incited them to riot,” Roosevelt wrote. “On thinking it over, however, it occurred to me that there was one way in which I could undo most of the mischief he was trying to do.” Roosevelt assigned several dozen Jewish police officers to protect Ahlwardt, thus “mak[ing] him ridiculous.” 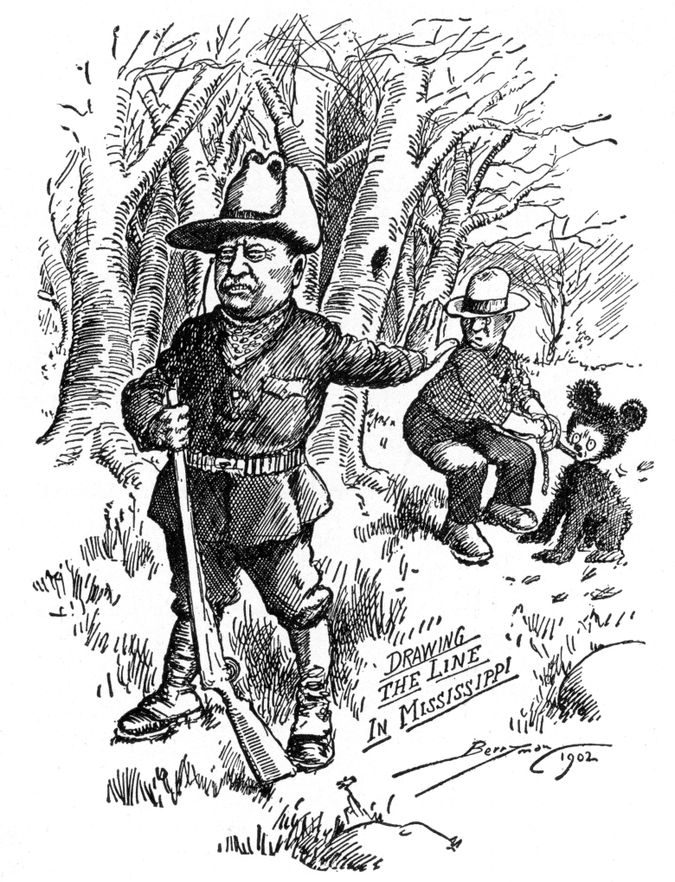 President McKinley appointed Roosevelt as the assistant secretary of the Navy in 1897. Roosevelt resigned from the post a year later in order to take part in the Spanish-American War. Despite having no military experience other than a stint with the New York National Guard, Roosevelt formed the First U.S. Volunteer Cavalry Regiment and led his men into battle against the Spanish in Cuba. His so-called Rough Riders was a diverse group that included fellow Ivy Leaguers (Roosevelt went to Harvard), Native Americans, cowboys and a significant number of Jews. The first Rough Rider to die in battle was Jacob Wilbusky, a 16-year-old Jewish cowboy from Texas. Roosevelt’s stint fighting the Spanish would come in handy in getting out the Jewish vote the following year, when he ran for governor of the state of New York. Yiddish handbills touting Roosevelt’s candidacy flooded the Lower East Side, tying his campaign against the Spanish to avenge the Inquisition of 1492.

From his post at the statehouse, it was a short leap to the national stage, and in March 1901, Roosevelt was inaugurated as vice president to McKinley. It’s a cliché that a vice president is a heartbeat away from the presidency, but in Roosevelt’s case it proved true: Within half a year, McKinley fell victim to an assassin’s bullet. Roosevelt acceded to the White House and easily won a second term in office in 1904.

Roosevelt was the first president to appoint a Jewish cabinet member. He named Oscar Solomon Straus as secretary of commerce and labor, a position that also placed him in charge of the United States Bureau of Immigration. The German-born Straus had previously served as ambassador to the Ottoman Empire — a position he would resume under Roosevelt’s successor, William Howard Taft. Later on, Straus became president of the American Jewish Historical Society. Straus’s brothers, Nathan and Isidor Straus, co-owned the department store R. H. Macy & Co., and later on they acquired the store that would become Abraham & Straus. (Isidor Straus died tragically, as a passenger on the Titanic.) Straus’s grandson Roger W. Straus Jr., founded the publishing company Farrar, Straus and Giroux.

As president, Roosevelt issued a strong letter of rebuke to the Russian czar in 1903 after the murder of 49 Jews in the Kishinev pogrom. Pogroms

like Kishinev prompted waves of Jewish immigration to the United States from Eastern Europe and Russia, a situation not welcome by everyone. Roosevelt, however, resisted efforts to stem the tide. He opposed labeling Jews as a separate race on their passports, saying, “I should no more have a man entered on a passport as a Hebrew than as an Episcopalian, or a Baptist, or a Roman Catholic.” He went on: “There is no room in this country for hyphenated Americanism. When I refer to hyphenated Americans, I do not refer to naturalized Americans. Some of the very best Americans I have ever known were naturalized Americans, Americans born abroad.” Words that resound with great impact today.

Roosevelt won the Nobel Peace Prize in 1906 for his role in the mediation of the Russo-Japanese War; he contributed a portion of his prize money to the National Jewish Welfare Board. In 1918, shortly after the Balfour Declaration, which favored establishing a national home for the Jewish people in the Land of Israel, Roosevelt wrote, “It seems to me that it is entirely proper to start a Zionist state around Jerusalem,” suggesting that peace would happen only if Jews were given Palestine.

In what remains something of a mystery to this day, Roosevelt kept two menorahs at Sagamore Hill. A gift from Sarah Bancroft Leavitt, who was not Jewish, the seven-branched candelabras are Jewish symbols referencing those used in the ancient Temple in Jerusalem.

As for those cute, furry little eponymous bears, Brooklyn candy-store owner Morris Michtom was inspired by a cartoon of Roosevelt refusing to gun down a bear that his hunting partners had tied to a tree after five unsuccessful days of hunting. His wife, Rose Michtom, sewed the bear overnight, and they placed it in the shop window with the label “Teddy’s bear.” By the end of the day, Michtom had orders for a dozen more. Born in Russia in 1870, Michtom had come to America at age 17; he wanted to make certain that the president would not be insulted, so he sent the original doll (which is now on display in the Smithsonian) as a gift to the Roosevelt children, with a note asking for permission to call it “Teddy’s Bear.” Permission was granted, and the bears sold so quickly that the Michtoms closed their candy store and founded the Ideal Novelty and Toy Company, which mass-produced the bears into the 1970s. The Michtoms shared the financial windfall from the bears with the Hebrew Immigrant Aid Society, the Jewish National Fund and other similar organizations.

Seth Rogovoy is a contributing editor at the Forward. He wonders what ever happened to his Teddy Bear.