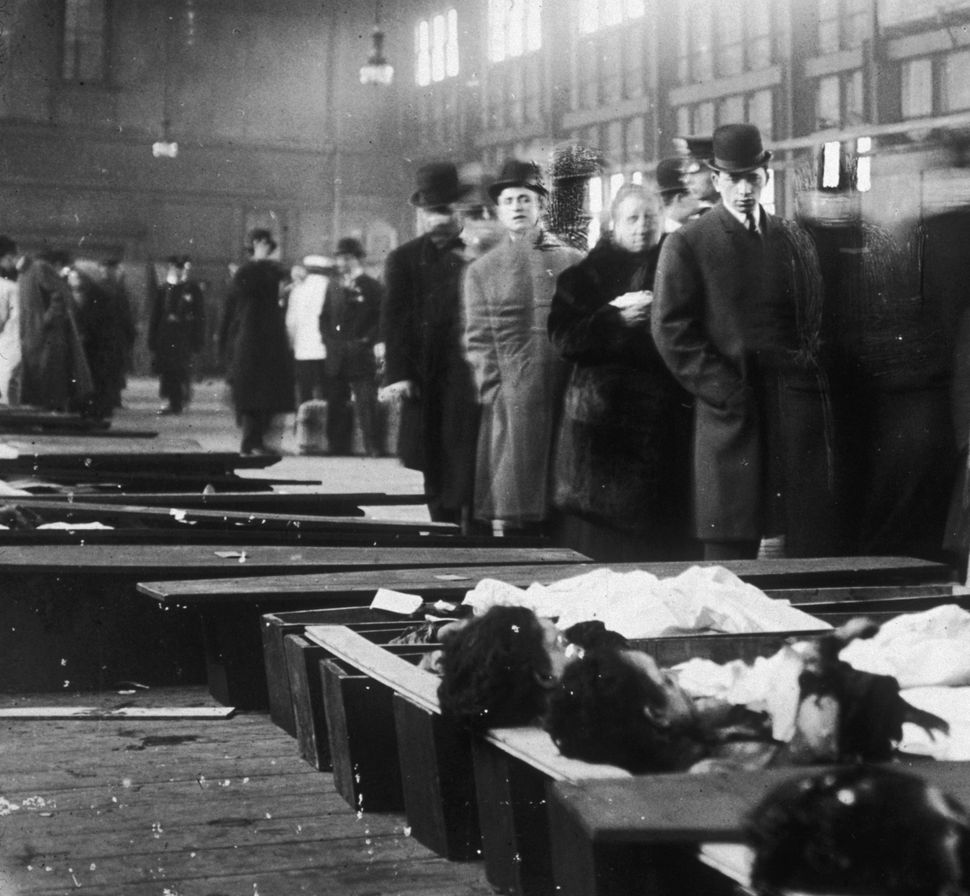 People line up to identify victims of the Triangle Shirtwaist Factory fire in March, 1911. Image by Hulton Archive/Getty Images

In New York City, you are always walking past a story. 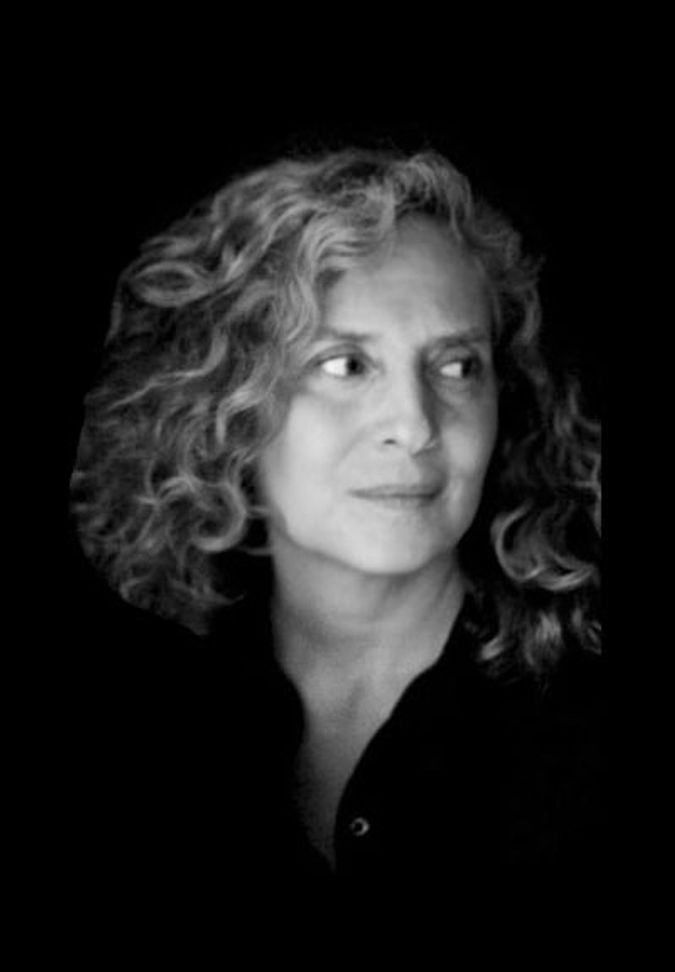 For a long time, the composer Julia Wolfe often walked past the site of the old Triangle Shirtwaist Factory, the Brown Building by Washington Square Park where 146 workers were killed in a 1911 fire. Until 9/11, this was the most fatal workplace tragedy in American history. There was the street to which some jumped to their deaths, preferring that fate to burning; the still-standing building, now owned by New York University, the same school at which Wolfe directs the music composition program. And there was a small plaque outside, posted by the International Ladies’ Garment Workers’ Union, noting the fire’s legacy: “Out of their martyrdom came new concepts of social responsibility and labor legislation that helped make American working conditions the finest in the world.”

The ways in which those conditions still fall short have consistently interested Wolfe, a 2016 recipient of the MacArthur “genius” grant. She took home the Pulitzer Prize for music for her 2014 work “Anthracite Fields,” which gave voice to the often grim experiences of Pennsylvania coal miners. It was the second in a series of evening-length works that Wolfe has composed on the subject of American labor, following the Appalachia-set “Steel Hammer” (2009). 2019 will see a new installment in the series: “Fire in my mouth,” a work for choir and orchestra about the Triangle Shirtwaist Factory fire that will premiere with the New York Philharmonic on January 24.

“The working people in those stories are men,” Wolfe said, referring to “Anthracite Fields” and “Steel Hammer.” “There are very important threads of women in those pieces. But I thought, well, I think I need to focus on women in the workplace. And then here was this story that was just a block away.”

She was sitting at her dining room table in Tribeca, a little jet-lagged from a recent trip to Argentina (she had joined her son, who was studying there on a semester abroad, to celebrate his birthday). Dusk fell outside, and lights from the Freedom Tower, built near the former site of the World Trade Center, shone through the window. Wolfe raised her hands to show just how, in the second of the four acts of “Fire in my mouth,” she would summon the “really raw sound” of the early 20th-century sewing factory floor to the elegant stage of the New York Philharmonic.

“The string players are making this sound like a Geiger counter,” she said. “You take the bow, you press it down really hard.” She mimed the motion, and voiced a guttural, stuttering noise. Then there will be percussionists doing rim rolls: “It gives the effect of what that needle sounds like; it’s a real tickety-tack sense.” And the brass section, “just blowing wind through their instruments; they’re amplifiers, in a way.”

The auditorium will be engulfed by a nearly pitchless roar. Then the choir will join in, 36 women split into two groups. One sings the Yiddish song “Mit a Nodl on a Nodl,” or “With a Needle, Without a Needle.” The other sings a southern Italian folk song that Wolfe describes as “a little dizzying.”

“These two things are happening simultaneously and do not go together, really,” she said. But the victims of the Triangle fire were predominantly Jewish and Italian immigrant women, and Wolfe wanted to evoke the blend of cultures on the factory floor.

The story of the Triangle fire, as she’s set it to music, has four parts. First: “Immigration,” the introductory movement set to text from an oral history by a Jewish woman who came to the United States with her four sisters. That section’s short libretto ends on a note of ambiguous hope, with the sisters eagerly “Looking to God knows what kind of future it’s going to be.”

Then the factory, the blend of voices over the clatter and chaos of the machines. After that, “Protest,” set during the 1909 New York shirtwaist strike, which was led primarily by Jewish women. There were 20,000 women in the streets during that movement; during Wolfe’s “Protest” there will be just the 36 in the choir onstage — and an additional choir of 110 girls, streaming down the aisles.

Those girls will end up onstage for the inevitable “Fire,” the hardest movement for Wolfe to write: 146 singers giving voice to 146 victims.

To get through that most painful sequence, Wolfe turned to stories that brought out each personal tragedy amid the vast one. A journalist who happened to be on the scene had called in the details as he saw them, she said, and one of his stories in particular caught her eye. “There was a man who was helping some of the women jump,” she said, “like literally held them out and helped them to the ledge. An unimaginable thing to be doing. At one point he embraced this woman. She put her arms around him. And then he dropped her. And then he jumped.”

The stories of New York City are always connecting in new ways. The story of immigration becomes the story of the labor movement. The story of the women’s labor movement eventually became the story of women’s suffrage. In Wolfe’s bright dining room, her eyes reddened as she spoke of women jumping to their deaths to escape the fire. Her studio is in her apartment, and I asked what it had meant to her to compose “Fire in my mouth” with the site at which the twin towers fell visible from the window.

“I was there,” she said, even before the question was fully out of my mouth. “I didn’t see people jump, but I actually was standing there that day.” She and her husband had walked their 5-year-old daughter to school, with their 3-year-old son also in tow. “We looked up and we could see that the plane had hit the building. Almost, it was like TV, because you don’t see things like that.” They took the children straight home. They saw the first tower fall from the very window I’d pointed out. “You could literally hear a communal gasp,” she said.

At first, Wolfe didn’t know about the Triangle fire victims who had jumped. Once she learned about them, she said, “it did resonate.”

In the last act of “Fire in my mouth,” after the choir marvels at that unknown couple’s tragic embrace, they sing “I see them/falling/See them/falling.” Then they chant the names of each of the fire’s victims in counterpoint. Wolfe sang some of them, to demonstrate: “Fannie Lansner. Bessie Dashefsky.” I thought of the 9/11 Memorial, the names of the victims ringing fountains falling endlessly into the earth. And of John Adams’s post-9/11 composition “On the Transmigration of Souls,” in which the names of the terrorist act’s victims were sung by a choir. “The most beautiful names I’ve never heard of,” Wolfe said, scrolling through a list of the Triangle Factory victims. “It’s interesting that names get lost.” Lost — and sometimes, against the roar of history, found.

A New York Philharmonic archival exhibit enhanced by materials from The Forward, including its front-lines coverage of the Triangle Shirwaist Factory fire and its aftermath as well as profiles of the victims is on display at the Grand Promenade at David Geffen Hall until Feb. 28th

“Fire in my mouth” premieres January 24 at the New York Philharmonic.

Correction, December 18, 11:25 a.m.: A previous version of this article stated that Wolfe had been visiting her son in Brazil, when she had in fact been visiting him in Argentina.