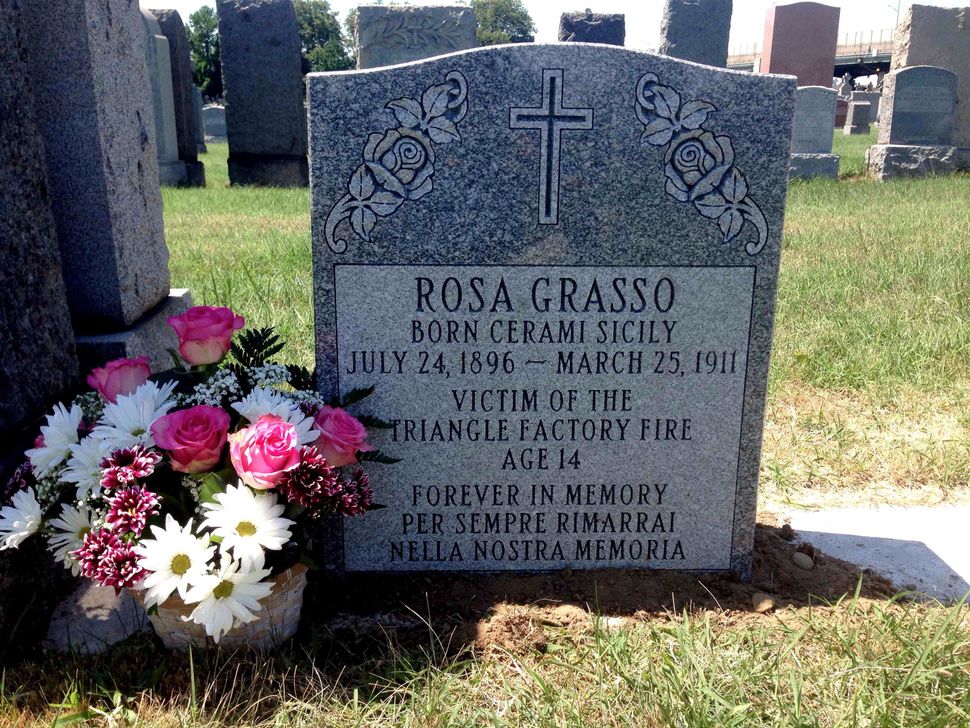 At Calvary Cemetery: The grave of Rosa Grasso. Image by Michael Hirsch

Watching a visit to a cemetery streamed on Facebook Live might not sound like the most engrossing of afternoons, but in the hands of photographer, journalist, and historical researcher Michael Hirsch, it’s a rarely interesting occupation. On a recent late-August Tuesday, Hirsch wasn’t visiting just any cemetery. He was making a pilgrimage to see some old friends who happen to be major but misunderstood figures in United States History: the victims of the Triangle Shirtwaist Factory Fire.

That fire, in 1911, was the most severe industrial disaster to occur in New York City, and one of the worst to ever happen in the nation. When fire caught on the lowest floor of the factory, which occupied the 8th-10th floors of a building in Greenwich Village, workers were prevented from escaping by the factory’s locked doors. (At the time, it was a common practice to lock employees in during working hours.) 146 people died, most of them young immigrant Jewish and Italian women.

The Forward has featured Hirsch before, most recently during the centenary of the tragic event in 2011, when he wrote about his mission to visit and maintain the graves of the fire’s victims. At the time, he wrote “More than 80 of their resting places are in serious need of repair and restoration, including 15 that never received a headstone at all.” (Hirsch was also named a member of that year’s “Forward 50.”)

Five years later, Hirsch’s annual pre-Rosh Hashana visits to the graves of the fire’s 101 Jewish victims are unique for two reasons. It’s the tenth year he’s engaged in the ritual, and it’s the first time he’s broadcast it. (He visits the graves of Christian victims at Christmastime.)

Why Facebook Live? “I have invited people to involve themselves in what I’m doing for more than a decade now,” Hirsch said, speaking with the Forward over the phone after his initial broadcast from Staten Island’s Mount Richmond Cemetery, one of several around the city where victims are buried. “It’s so hard to get anyone to do that.” He’s also had mixed luck bringing people along. After years spent researching the Triangle victims he’s become friendly with many of their family members, and while those relatives are interested in their own ancestors’ stories, they tend to get distracted when it comes to the others. Broadcasting his trips to the victims’ graves lets him share the experience widely and efficiently. 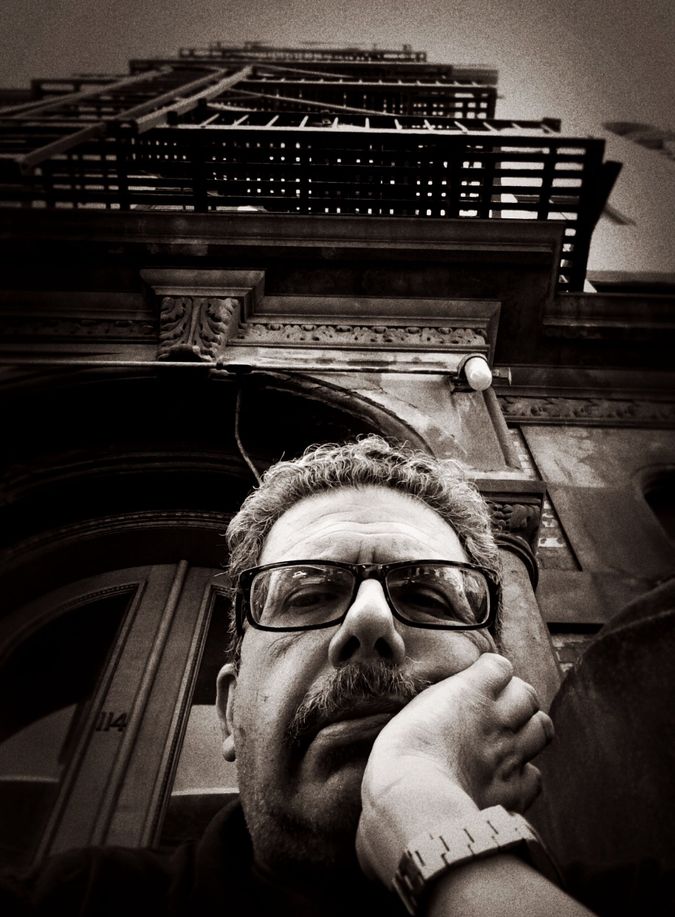 Hirsch’s interest in the Triangle victims began after he read David von Drehle’s “Triangle: The Fire That Changed America.” The book included, at its end, a list of the victims of the fire; the first name on the list was Lizzie Adler.

“I just started this just to figure out who she was,” Hirsch said. “What happened to her family? What did she look like?” He quickly learned she’d lived close to his own home in Manhattan’s East Village, a neighborhood he was immersed in researching.

“I schlepped out to that cemetery in a hot July and struggled in the high grass to find her grave,” he said. When he found it, he learned that she was buried alongside a number of other victims of the fire, but noticed something strange; a number of the names on the gravestones didn’t match the names in the book.

Since that moment, Hirsch has dedicated himself to righting the record on the victims, from making sure their names are known to bringing new insight to the circumstances under which they worked at the Triangle Shirtwaist Factory. He’s uncovered the names of six previously unidentified victims, co-produced an HBO documentary on the subject titled “Triangle: The Unidentified,” and is currently working on a book on the subject.

He’s learned some interesting things over the course of his research. Most surprisingly, he says, the Triangle Factory wasn’t quite the sweatshop it was made out to be.

“The people who went to work in that building, not only were they paid well by Triangle,” he said, “but they got to work in a situation they could only dream about in the tenement district where they came from. This building had hot and cold running water, electricity, the most modern machinery, lots of window light, four working elevators, it had to be the equivalent of going to Rockefeller Center to work.”

He also pointed out that given the extent to which the owners of the Triangle Factory have been vilified for the conditions that led to the deaths in the disaster, many don’t realize they suffered personal losses in the disaster.

“I currently believe about seven people associated with the family or very closely related to the family died in the Triangle fire,” he said. “Their families worked in every corner of that factory. They were involved in every aspect from new greenhorn workers all the way up to managers and the like.”

Hirsch’s yearly visits have informed his professional life, but he finds them deeply personal. They connect him to the Jewish cultural traditions of his New York childhood, which included making visits to the graves of his ancestors in the period leading up to the High Holidays. And through his dedication to honoring the victims’ lives – this year, he’s made it a goal to get three new headstones for victims of the fire, two Jewish and one Christian – he’s gained a deep appreciation for who they were, and become close with many of their surviving relatives.

“I’ve become so close to these people,” he said. “It took a long time to figure out accurately who they were, and that commitment has brought me very close to them. I make little promises to them along the way, that’s the reason I repair their graves. I promise them someday their families will visit. Frequently that’s come to pass.”