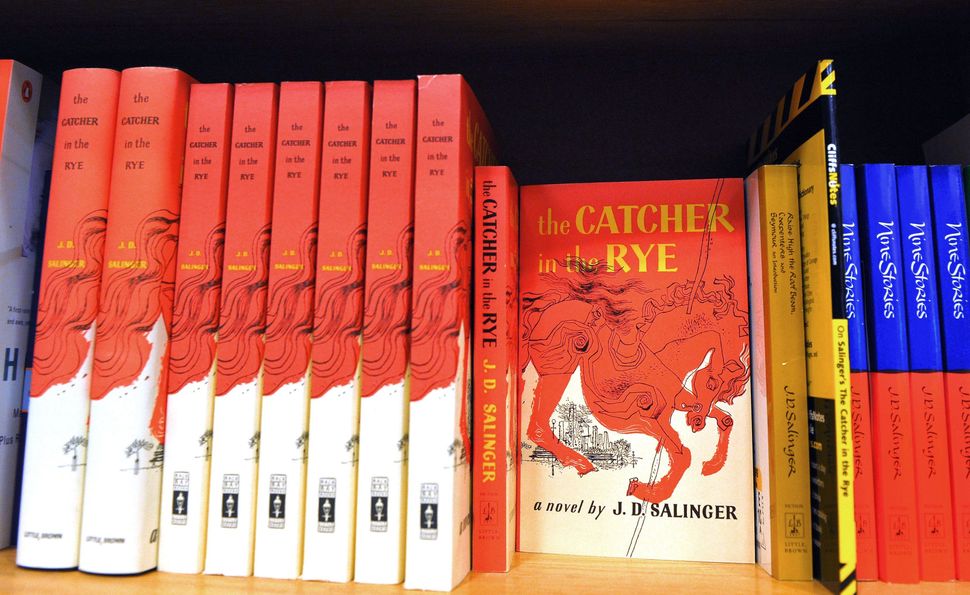 J.D. Salinger’s “Catcher in the Rye.” Image by Getty Images

Celebrations of the American Jewish author J.D. Salinger’s 100th birthday on January 1 continue apace. A J. D. Salinger Boxed Set Centennial Edition has appeared and forthcoming are a new study by Sarah Graham and a paperback reissue of Thomas Beller’s anecdotal biography. The writer, who died in New Hampshire in 2010, will also be honored by an exhibit in October at the New York Public Library, featuring items from his private archives. For insight on his achievement and whether rumored unpublished works will ever see the light of day, The Forward’s Benjamin Ivry recently spoke with Kenneth Slawenski, author of an acclaimed biography and founder of the Salinger-themed website DeadCaulfields.com.

The Forward: Salinger was a bar mitzvah boy of Lithuanian Jewish origin, later described in biographies as the son of a New York importer of kosher cheese and ham, and grandson of a rabbi of the Adath Jeshurun Congregation in Louisville, Kentucky,. Was there an inherent contradiction in simultaneously importing kosher cheese and ham?

Kenneth Slawenski: I am not sure it was kosher cheese, it was just cheese. That was his father. His grandfather put himself through medical school by serving as a rabbi. His grandfather was born in Russian Lithuania, which was the epicenter of Jewish life at the time, so when he came to America, it was only natural that he became active in the Jewish community. The grandfather was very devout, but Salinger’s father was not. The family attended Temple Emanu-El in New York, but only on major holidays.

Salinger’s mother Marie Jillich, born in Iowa, changed her name to Miriam and considered herself Jewish after marrying Salinger’s father. Did his father’s family fear a scandal if word got out that his mother was not born Jewish?

Right. Salinger’s daughter Margaret claimed that he only knew [about his mother’s conversion] after his bar mitzvah. Miriam, his mother, considered herself very Jewish. There is no evidence that she officially converted. That being said, they still celebrated Christmas and were not devout or practicing. They identified as Jews, but not so much in the religious sense.

Why did Salinger agree when his father insisted that he learn about the meat importing business in Vienna and Bydgoszcz, Poland in the late 1930s? Had he not left Austria in 1938, one month before it was annexed by Nazi Germany, would he have been in danger?

Had he stayed longer, he definitely would have had problems, because the [Jewish] family he stayed with had problems. Salinger had flunked out of different schools, and his father did not want to finance another attempt at education before he got practical job experience. So he worked in a slaughterhouse where pigs were killed, but he had no choice.

In “A Perfect Day for Bananafish” (1948) Seymour Glass, son of an Australian Jewish vaudevillian, refers to a little girl with a Jewish-sounding name: “Ah, Sharon Lipschutz… How that name comes up. Mixing memory and desire.” Was Salinger alluding ironically to the reputation of T. S. Eliot, who wrote this quotation from “The Waste Land,” for being anti-Semitic?

I can’t say whether or not [Salinger] was even aware of that. There are references to Eliot in several of his works. [Salinger] was not a fan of Eliot, and yet he seemed to be obsessed with him. I think it was the message of Eliot’s poetry, the philosophy of “The Waste Land.” Eliot’s outlook was far more dismal than Salinger’s at the time. In the novella “The Inverted Forest” (1947), Salinger imagined a poet who conceived of “not a wasteland, but a great inverted forest/with all the foliage underground.”

In Salinger’s Hemingwayesque tale “A Girl I Knew” (1948), Leah, an Austrian Jewish woman is killed in the Holocaust. Although appreciated by some, the story seems earthbound. Might he have realized that factually recounting his wartime experiences would result in literal-minded works, unlike the idiosyncratic, offbeat Salinger style admired by readers?

That story in particular comes very close to his own experience. It is territory where he is not exactly comfortable because it is too close to his own reality. I like the story a lot, frankly. It is the only story where he does directly address the Holocaust. He condemns murder by acquiescence, by those who turn away from the deed, as much as those who do the deed.

In 2013, the Associated Press claimed that unpublished books left behind by Salinger would appear, dealing with, among other subjects, the author’s World War II service. Where are they? If they are lesser achievements, like the much-hyped posthumously published novels by Harper Lee and Vladimir Nabokov, might Salinger fans be disappointed?

The short answer is yes. I think we will never see them, because his son [Matthew,] who controls the estate, is more interested in his father’s legacy than in publishing new books. You would think the centennial would be the perfect time to do that, but the answer is no.[…] Salinger’s fans are his worst enemies. Salinger was aware towards the end of his life that his own fans were waiting for him to die so that they could read his unpublished manuscripts. That’s a terrible statement. The man’s been dead now for almost ten years and some fans are still frustrated about where those works are.

One critical study charges that although he visited a recently liberated satellite of Dachau concentration camp during World War II military service, Salinger “did not identify with the six million Jews the Nazis murdered. Although Salinger did not deny the Holocaust, he definitely tried to ignore it.”

I don’t put a lot of stock in that point of view. The trauma of visiting a [concentration] camp is the same as being in battle. It is not an experience you want to relive. It does not mean that you are questioning the reality of it. Later in life, Salinger wrote a letter explaining that he refuses to go back to Vienna because of “what the bastards did to the Jews.”

Salinger investigated Dianetics (a forerunner of Scientology), yoga, Sufism, Taoism, Christian Science, et al. Was there any sign that Kabbalah influenced his work, as one writer alleged after claiming to find numerological references in “Raise High the Roof Beam, Carpenters”?

Not that I know of, no. He had a spiritual curiosity that was phenomenal after the war, and investigated any number of beliefs. But he landed pretty much on Vedanta, and that embraces all beliefs. You can be Jewish and still adhere to Vedanta.

In 1971, Jerry Lewis, who was 45 at the time, claimed that he was the “Jewish Holden Caulfield” and for years had wanted to play the role onscreen, but Salinger refused to sell him the rights. Could there have been a worse fate for “Catcher”?

(laughs) Now, that’s about the worst they could do. I guess in France they would have loved it, but outside of France, I doubt it.