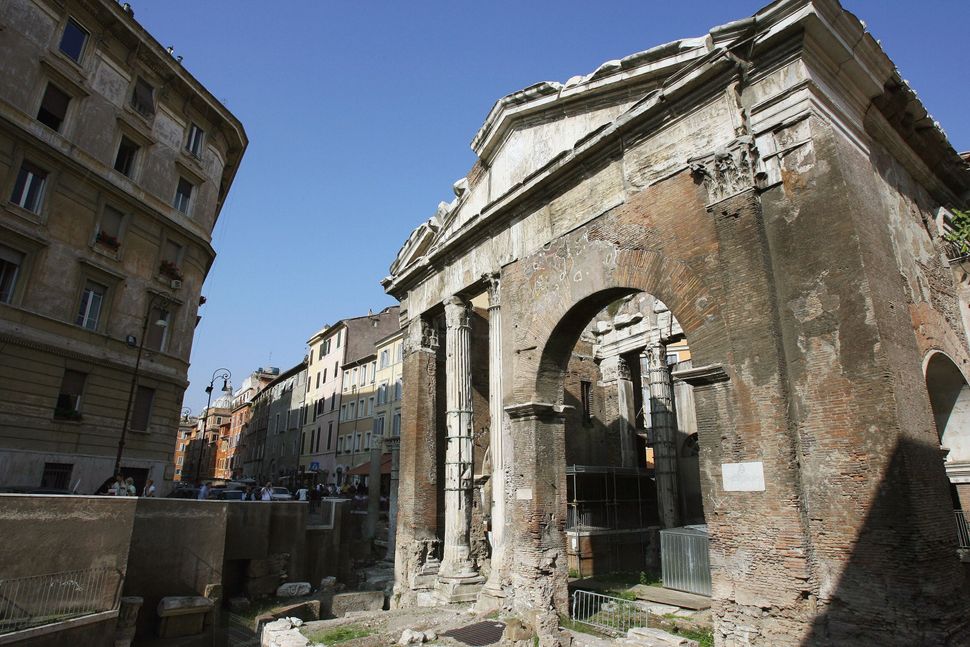 On The Banks Of The Tiber: The ghetto dates from 1555, during the Inquisition, when Pope Paul IV decreed that all Jews must live in a confined area. Jewish residents are being ?expelled? from the second oldest Jewish ghetto in Europe by wealthy VIPs buying up property, according to Italian Jewish leaders. Image by Getty Images

The Italian Executioners: The Genocide of the Jews in Italy
By Simon Levis Sullam
Princeton University Press, 208 pages, $26.95

In the cultural geography of the Shoah, Italy doesn’t take up much space. Our imagination turns instead to Germany and Poland. This is for good reason, of course, as the Shoah was a German initiative largely undertaken on Polish soil. As for the Italians, we tend to see them as too busy making love and pasta to take much interest in genocide and war.

But the bigger picture, as an Italian historian reminds us, is always more complicated. Simon Levis Sullam teaches history at Università Ca’ Foscari, in Venice. His new book, “The Italian Executioners: The Genocide of the Jews of Italy,” takes aim at the prevailing view that his country was “outside the shadow of the Holocaust,” as another Italian historian famously and erroneously put it.

Sullam’s book is squarely in the subgenre of Holocaust historiography seeking to deflate the national myths of postwar Europe. The title is an overt reference to Daniel Goldhagen’s 1996 “Hitler’s Willing Executioners,” which argued that average Germans were at best indifferent to genocide and at worst enthusiastic participants. Jan Gross’s 2001 “Neighbors: The Destruction of the Jewish Community in Jedwabne, Poland” punctured the dearly held beliefs of Poles as either righteous warriors or hapless victims.

And now it’s Italy’s turn. “The Italian Executioners” focuses on the Italian Social Republic, also known as the Republic of Salò, a rough analogue to France’s Vichy. This was the northern half of Italy ostensibly run by Mussolini from September 1943 to May 1945 (the Allies occupied the southern half). As Salò was a Nazi puppet state, Italians found it harder to demur from arresting Jews and assisting in their deportation.

For instance: On October 16 1943, more than 1,000 Jews were arrested in Rome. To this day, we tend to blame the German occupiers. But while the list of arrestees was prepared by the Italian Ministry of the Interior’s Office for Racial Affairs, the arrests themselves were “mainly carried out by Italian police and Fascists,” with the assistance and approval of Rome’s chief of police, Pietro Caruso.

It was a similar story a few weeks later in Venice. On December 5, 1943, the Venetian chief of police issued an order for the “immediate arrest of elements belonging to the Jewish race.” Under cover of darkness, the Carabinieri, accompanied by fascist volunteers, arrested Jews in their homes. The next day, the local authorities proudly informed the Ministry of the Interior that “163 pure-blooded Jews were arrested [note the passive voice], 114 of whom are women and 49 are men.”

Sullam’s description of “La Senerissima” at the time of these arrests, and how they were “well-integrated into the ordinariness of daily life,” is chilling. Winter in Venice is never a treat, but the winter of 1943 was particularly bitter. And yet in German-occupied Venice, removed from Allied bombings, the “movie theaters were open, hotels were packed, and people danced at parties and clubs.” The night before the raids there was a piano concert at Teatro La Fenice; the following day there was a soccer match. And in between the Jews were jailed, their possessions cataloged and confiscated. Some readers may recall the Czeslaw Milosz poem “Campo dei Fiori,” Milosz’s meditation on the spring carnival in Warsaw, Poland, whose “bright melody drowned the salvos” of the Warsaw ghetto uprising.

As in other countries, many Italians enriched themselves at Jewish expense. The authorities charged with confiscating Jewish property in Rome, Venice and Florence took advantage of the attendant opportunities for self-enrichment. Non-Jewish industrialists had their business partners arrested, conveniently putting themselves in control of the business. Even after three-quarters of a century, it is infuriating to read of the Lake Maggiore couple that fleeced Jews fleeing for Switzerland. Jews paid the couple for guidance through the tricky alpine footpaths to freedom; instead they turned in the Jews, pocketing both the guide fees and the reward money.

“The Italian Executioners” is a short book. But it’s long enough to make a convincing argument for how frequently ordinary Italians, in Sullam’s words, served as “agents and accomplices of the Holocaust.” There’s an understandable tone of anger, but it’s certainly warranted, and for the most part Sullam avoids the hectoring that undermined the force of Goldhagen’s book.

Although I suspect it was written with a popular audience in mind, it is ultimately a book for specialists. It might have benefited from a little more background of the basics in the history of Italy and its Jewish communities. One minor but glaring error of judgment is when Sullam refers to Auschwitz as a “Polish extermination camp,” which Polish readers will perceive as a grave insult.

There’s also the larger issue of what Sullam downplays or elides. There was indeed no shortage of willing collaborators and executioners in wartime Italy. At the same time, it is true that the Italian authorities occupying Croatia and France refused to collaborate with Nazi roundups. Within Italy itself, hundreds, if not thousands, of ordinary citizens saved Jewish lives: Yad Vashem recognizes 694 Italians as Righteous Among the Nations.

The 1943 Roman arrests were preceded by a Nazi demand of 50 kilograms of gold from the Jewish community; otherwise 50 Jews would be deported. The Catholic Church offered to lend the money to buy the gold. But the community paid the ransom due to significant anonymous donations from Italian Christians. As did other places, Italy had its collaborators and its heroes.

Sullam writes of “those who stood by and did nothing, who turned their attention away, choosing to ignore what was happening, preoccupied with and sometimes overwhelmed by other things, by daily hardships and the tragedies of the ongoing war.” Eighty years later, Americans aren’t facing the same pressures that Italians did during World War II. Still, there are echoes of the complicity of passivity in how Americans — myself included — go about their business while the government imprisons refugees and forcibly separates them from their innocent children.

Of course there is a vast moral difference between President Trump’s America and fascist Italy. But let’s not pretend the comparison has nothing to teach us.

Gordon Haber is the author of the short story collection “Uggs in Gaza.”