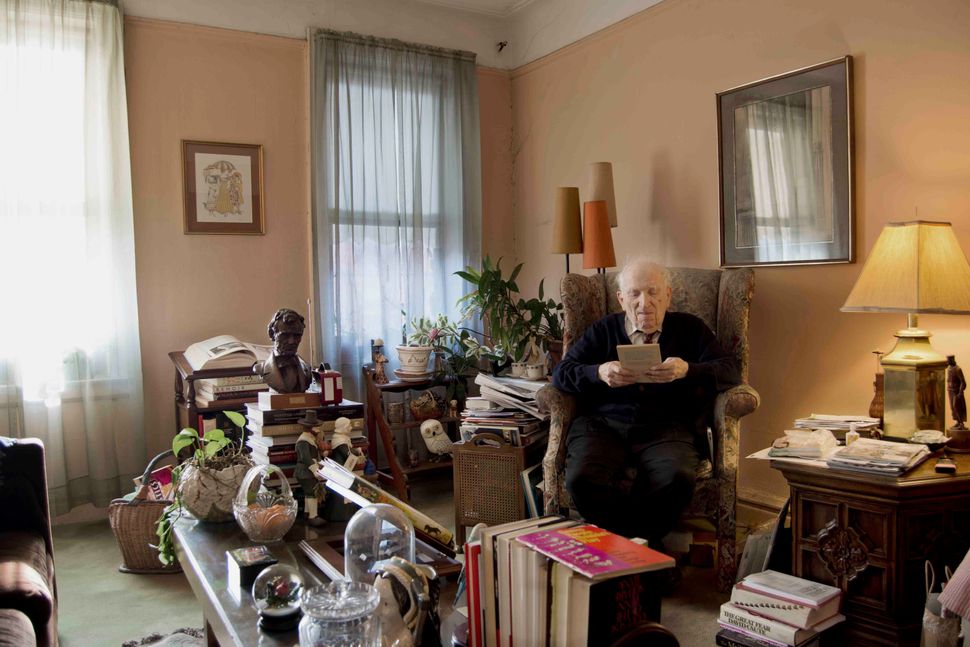 Larry Eisenberg in his apartment in 2016. Image by Marisa Scheinfeld

Larry Eisenberg, commenter supreme,
Has passed away, it would seem
As recorded in The Times,
Which he graced with his lines,
His daughter reports she’s bereaved.

With his limericks sublime,
Eisenberg was 99,
A biomedical engineer
And Sci-Fi writer who endeared,
He was truly one of a kind.

Born to parents Sidney and Yetta,
Larry was a Bronx-raised go-getta.
He gained two bachelors’ in the city,
Next a Masters and a PhD,
Then taught at the University of Rockefeller

He directed its electrics lab
And at writing took a stab.
1965’s “Limericks for the Loo”
Written with George Gordon, that’s who,
Plus some poems for Jewish lads.

To the internet he took late
First commenting in 2008.
Anapests he wrote with aplomb,
Remarking on NYTimes.com
A break from the usual debate.

His first on an op-ed by Obama
With his plans for Middle East drama.
Eisenberg, done with that theater,
Responded to the then-senator in meter,
Calling for an end to the trauma:

Profiled by the Forward in 2016
Eisenberg said how lucky he’d been.
“I loved going in every day,”
He said of his Rock Uni stay.
In retirement he became a meme.

With over 13,000 comments
His limerick legacy cements,
With verses sharp and mainly clean,
Many website readers gleaned
A sense of endless enjoyment.