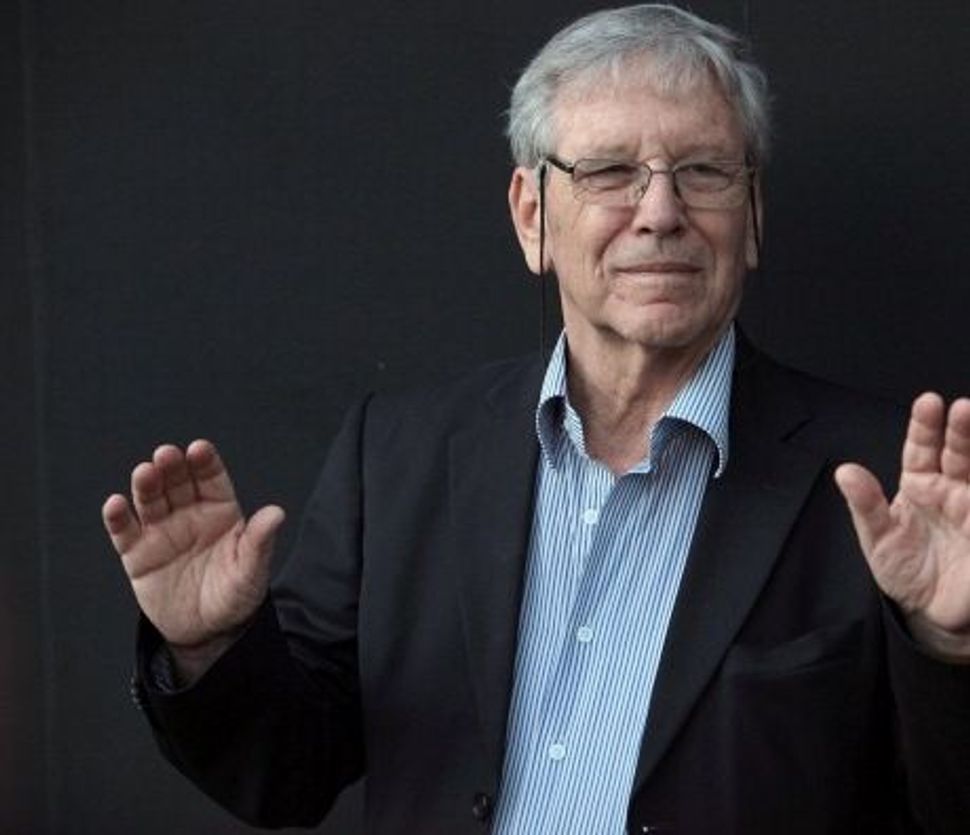 Amos Oz in 2012. Image by Elisabetta A. Villa/Getty Images

Editor’s note: Amos Oz passed away on December 28, 2018 at the age of 79. The Forward’s Naomi Zeveloff spoke with him by phone a month before his death. The following interview was one of Oz’s last.

A longtime two-state activist, Oz called the book — a trio of essays on fanaticism, Judaism and Israel — “ammunition” for the younger generation to address what he identifies as the biggest debates of our time. (As for the “zealot” addressed in the title, Oz writes in the preface that he seeks the “listening ear of those whose opinions differ from my own,” and as such he has helped make the book available at deeply discounted prices in Arabic and Russian, and also at West Bank settlement bookstores.)

The book offers a restrained kind of “ammunition.” Oz’s stances sound decidedly moderate in this highly polarized age. The three essays are adapted from Oz’s previous work, a combination of lectures, books and other writings, updated for this book’s Hebrew publication in 2017.

In the first essay, Oz advocates curiosity, imagination and humor as “antidotes” to fanaticism of all kinds. The second essay, an answer to restrictive religious trends in Israel, is an exploration of the humanistic side of Judaism. The third essay is an argument for the two-state solution, a position that Oz has held for more than five decades, even as other high-profile Israelis, including, recently, his literary contemporary A.B. Yehoshua, have defected from that beleaguered camp in search of alternatives.

Oz spoke with the Forward’s Naomi Zeveloff over the phone from his home in North Tel Aviv about his brief stint as a child ideologue, his response to American progressives who see “civility” as a trap, how his morning walks influence his writing and why he continues to support two states. The following interview has been edited for clarity and length.

Naomi Zeveloff: In the book, you describe your childhood as a “little Zionist-nationalist fanatic.” Your attitude changed because of your friendship with a British policeman. What happened?

Amos Oz: He shared with me different perspectives. He taught me to ask questions: If I were a Palestinian Arab whose family lived here for many, many generations, how would I feel about the influx of Jewish immigrants armed with the Bible and claiming exclusive rights to the land? How would I feel if I were a British [man] who shed his blood in order to beat Hitler, and now he is being labeled by militant Israelis, militant Zionists, as a continuation of the Nazis? Those conversations were eye-openers for me, because this was a kind of language I hadn’t heard spoken around me.

The first essay in the book is based on a lecture series you gave in 2002. How did you change your essay all these years later?

16 years ago it was very common in parts of the world, as a consequence of 9/11, to assume that fanaticism has to do with Islam or radical Islam or the Arab world or the Middle East. Even then, I thought it was a gross misunderstanding of the dangerous syndrome of the 21st century, which is very many different forms of fanaticism, not just Islamic fanaticism, not just religious fanaticism.

I developed my lecture from 2002 into the essay in which I tried to describe a certain fanatic gene, which may exist in almost every human being. That does not mean that every one of us is a fanatic, but we should better be aware of a certain fanatic potential in every one of us. Very often, fanaticism begins at home. It begins inside the family. It begins with the urge to change our kin, to change our beloved ones for their own good because we think we know better than them what is good and what is bad for them, what is right and what is wrong in their thinking. The urge to change other people contains sometimes a certain fanatic potential.

Let’s talk about tolerance. Tolerance and civility are not popular terms in the Trump era. Some on the left say to be civil to the other side is to legitimize racist or anti-Semitic or sexist views, and that lines should be drawn. What do you say to this?

Well, you know, 30 or 40 years ago, when various [movements] inspired the whole world into believing in multiculturalism and the coexistence of different narratives of history, and different narratives of right and wrong and different narratives of human behavior, I was very enthusiastic about it. But in front of our own eyes, multiculturalism, or a variety of identities, very rapidly developed into a kind of universal loathing. Millions and millions of people in your country, in my country, in many places, wake up in the morning and start loathing those who do not agree with them, or those who think differently, or those who look to them as an immediate threat on their way of life.

The subtitle of the book is “Letters from a Divided Land” — Israel. It’s a phrase that can also describe America right now. What is the message for Americans in this book?

If I had to squeeze my wisdom into one word, I would say: “Listen, you don’t necessarily have to agree to what you listen to, but listen very carefully. Listen even to voices which you regard as dangerous, abhorrent, terrible, monstrous.” Even if your conclusion is going to be, “I have to rebuff those voices, I have to fight them, I regard them as a threat to the future of my people or the future of my family,” you still would be wise to listen very carefully to what those other people are saying before you form your position or even your tactic of combating them or struggling against them. Listen with a certain degree of curiosity. Even try to ask yourself: What would it be that would have made me one of them? A different background? A different family? A different upbringing? Different values? A different environment? Could I be one of those? I think this is a very simple practice, but it’s a helpful one.

Would you put Donald Trump in the category of the zealot or the fanatic?

I happened to be in America for a visit a few days after Trump was elected president, and many of my liberal, left-wing New York friends were in a state of utter shock and they were speaking in one way or another about how the new Hitler is upon us. I remember that I responded with a certain reservation. I said [that] to me, Trump is more like [former Italian prime minister [Silvio] Berlusconi than like Hitler. Trump is many things. He is pampered, he is an immature man, he is a teenager craving unconditional, endless love from everybody. I don’t think he is fanatic. I’m not sure I would say about his vice president that he is not a fanatic, he probably is, but I don’t think Donald Trump strikes me as a fanatic.

You walk each morning before sunrise. What do these walks do for your writing process?

First and foremost they help me knock everything back into proportion. When I walk to the Mediterranean beach 20 minutes from my home, I watch the wind pushing the clouds in the dark sky, all the movement, the sounds of the birds and the peacocks. I know the elements are laughing at the words “eternity,” “never,” “forever” pronounced by politicians. I am old enough to tell you, here in the Middle East, words such as “never,” “forever” or “eternity” mean something like six months to 30 years.

I have changed my views many times on many issues, first and foremost when I was a boy of 15 or less and rebelled against my father and rebelled against my very right-wing and militant Zionist family and changed my name and moved alone to live on a kibbutz. I haven’t changed my mind in the last 50 years on the two-state solution, simply because I have not come across a better alternative. If anyone shows me in the next 10 minutes or 10 days or 10 months a better alternative to the two-state solution, I won’t have any problem changing my mind.

You write that Israel is both more than and less than what your parents and their parents dreamed of. Why less than and why more than?

It is less because nobody, not even in their wildest dreams, nobody 50 or 70 years ago, imagined that there will be Israeli fanatics who will burn alive an entire innocent Palestinian family in their home in the West Bank… On the other hand, nobody dreamt when I was a boy of 5 that in my lifetime there will be 6.5 million Jews in this country, half of the Jewish people.