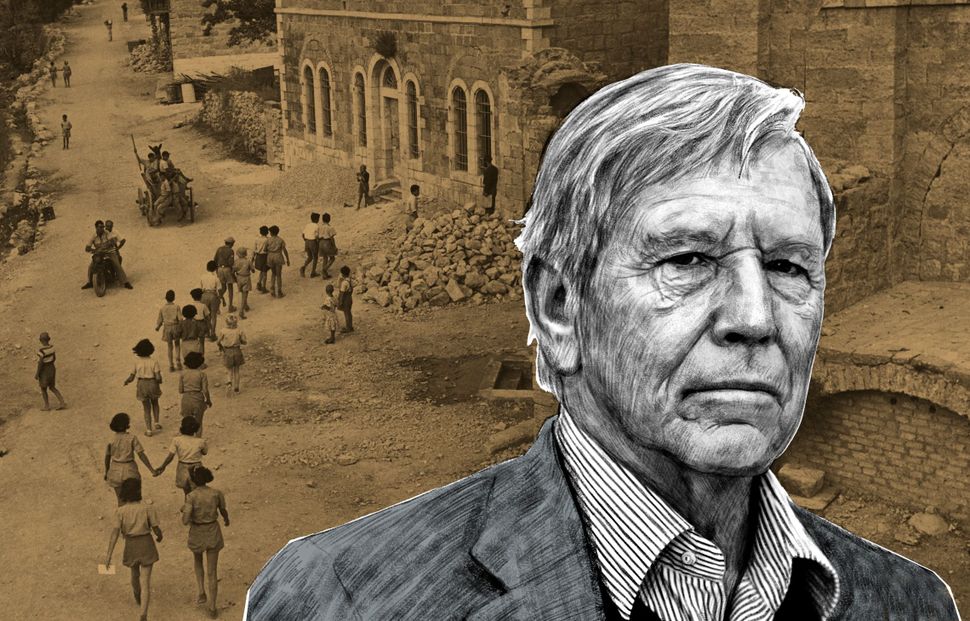 For Amos Oz, the publication of his memoir “A Tale of Love and Darkness” was an electric moment.

“As if I was digging in my own backyard, and I must have touched an underground cable; suddenly the lights in all of the windows began to flash,” he told me in 2011. The book, he said, “hit something which is common to many people.”

“A Tale of Love and Darkness” was received in Israel as a modern-day Bible. Internationally, it was a fresh window into Israel: a land not of sun-tanned warriors but survivors confronting the daily reality of an exilic past and a threatened future. Translated into 28 languages, it captured a people’s complex narrative in a way which no other Israeli memoir had. It even emerged as an informal guidebook to Jerusalem. When Yigal Schwartz, a professor of Hebrew literature at Ben-Gurion University of the Negev, conducted a comprehensive study of fan letters written to Oz, he noted that the overwhelming majority of letters described tears while reading and compared the book to Scripture, with many readers admitting that upon finishing reading, they went on a ‘pilgrimage’ to Oz’s Jerusalem, exploring the streets of Kerem Avraham as described in the book. For readers, the setting was essential; they felt that walking Jerusalem’s streets was necessary to fully understand the memoir, that reading it from afar was insufficient, and that to understand Oz’s childhood, one must seek out its stage.

What was it about Oz’s depiction of Jerusalem that so mesmerized his readers?

It was perhaps his rendering of shattered dreams — a disappointing Zion, a failed Europe — that spoke to the most basic, human experience of disillusionment.

Oz’s parents, Aryeh and Fania Klausner, were middle-class immigrants from Vilna and Rovno, aspiring intellectuals who continued to dream of the university halls they had left behind, and who never move away from their ground-floor apartment in Jerusalem. Though they had left Europe just the threat of the Final Solution had begun to draw closer, the place they had left remained idealized in their minds. It was, as Oz wrote. “a forbidden promised land, a yearned-for landscape of belfries and squares paved with ancient flagstones, of trams and bridges and church spires, remote villages, spa towns, forests, and snow-covered meadows.”

For the Klausners, Europe prevailed as the peaceful painting that classic literature had always promised them; despite being soaked in blood, it still had the “sensual aroma of a genuine, cozy world.” The idea of this fictional Europe permeated Oz’s upbringing. Through the memoir, a solitary bird chirps by his window; in her song, he hears the opening notes of Beethoven’s “Fur Elise,” the melody redeeming Jerusalem by “making it non-Middle Eastern.” But Oz gradually realized that the Europe which “excited and seduced” him only existed in the Jewish intelligentsia’s imagination. And his parents simultaneously joined their peers in dreaming of another paradise: that of Zion.

These dreamers “came to the Land long before [they] actually arrived here,” Oz wrote, writing “poems in Russian in the spirit of the Love of Zion movement.” Yet once they arrived at the shores of the land for which they yearned, new immigrants realized that it didn’t exist. instead encountering “dusty tin roofs, the urban wasteland of scrap iron and thistles, the parched hillsides… suffocating under the weight of white-hot summer.” Fania Klausner was probably the most disenchanted, ambushed by a city of “heat waves, poverty, and malicious gossip.”

Discouraged by lack of economic opportunity, hostility from British and Arab neighbors, and an under-developed society, these wistful immigrants continued to seek Zion as they had envisioned it from afar. They kept writing about a vision of Jerusalem as a city “fragrant with myrrh and frankincense, where an angel of God floats over every one of its squares.”

Oz blamed those same delusions for killing his mother. “The sublime, the tormented, the dreamy, and the solitary,” he wrote, had “deluded…and seduced” his mother, “until she succumbed and committed suicide in 1952.”

And as the child of early Zionist dreamers, Oz developed his Israeli ideal further than his forebears had even expected. He considered his family’s revisionist Jabotinsky-inspired Zionist principles too deeply mired in the Diaspora, and after his mother’s death, he left his father and Jerusalem for Kibbutz Hulda, in search of a totally new Zionist identity. There, Oz chose a new name for himself, leaving behind his family name ‘Klausner’ for the dramatic ‘Oz’, Hebrew for strength. A new name, a new place — he was determined to be whatever his family was not.

Oz’s rebellion against his family and past came to represent the Zionist narrative as a whole. Just as early Zionists wrote for themselves a story of forsaking the past and moving towards rebirth, so too Oz initially chose to compose an image of himself as reborn. For decades, when asked about his family background, Oz would leave much to his reader’s assumptions, dismissing his childhood as irrelevant and almost inconvenient. “I have hardly ever spoken about my mother till now, till I came to write these pages,” he wrote in “A Tale of Love and Darkness.” “After my father died, I hardly spoke about him either. As if I were a foundling.”

This kind of definition of Zionism, and what it meant to be Israeli — that is, to negate the past and experiences in other lands — had a significant impact on the way aliyah was commonly perceived. Moving to Israel from the Diaspora was not simply a matter of immigration and paperwork. It was a spiritual experience: a concept which the Israeli government made clear when deciding upon the word ‘aliyah’, or ascension, as the official term for that momentous migration. The Land of Israel was, Oz wrote, “the only place where the Jews could be cured of [the Diaspora’s] mental illnesses.” An Israeli identity, newcomers were promised, would transfigure the Jew into a Hebrew.

Yet for many immigrants who had just fled pogroms or wars in their native lands, the additional pressure to live out that narrative was traumatizing. Diversity of experience, any slight movement away from the Zionist narrative, was seen as weakness and as a product of having lived in the Diaspora. As the scholar Adia Mendelson-Maoz has pointed out, newcomers were not allowed to view themselves as immigrants, an identity which would allow them to embrace their pasts, but rather were dubbed olim, converts, reborn without a past.

Oz, as a teenager, tried to live up to that label. But “A Tale of Love and Darkness” tells a more complicated story, one in which immigration — the story of an uprooted family in a foreign country — is a central theme. “The vibrations of immigration lasted within me,” Oz told me. He expected those reverberations to last for several generations after his own. “I write about a disappointed love. My parents had an unrequited love [which] they carried back to Jerusalem…they tried to create a mini-Europe in the heart of Jerusalem.”

This, perhaps, is the deepest irony in Oz’s work: His family is preoccupied with two utopias at once, and can live in neither.

Yet there is one space in ”A Tale of Love And Darkness” that is tangible, and to which readers gravitate endlessly: Jerusalem, where both the visions of Europe and Zion are “dashed on a hot dusty pavement of…stone.”

Even in Oz’s earlier works set in Jerusalem, memories of a distant Europe can be found throughout. As Hannah Gonen, protagonist of Oz’s novel “My Michael” (1972), wanders the streets of the “brooding city” with “no end,” she considers it “an illusion,” where one can never “feel at home…even if one lives here for a century.” Hannah repeatedly describes the Middle Eastern city as full of “steppe fog and darkness,” a place where pianists practice Schubert and Chopin and where violins play “behind windows kept shuttered all day.” Europe, she is showing, has seeped into the Israeli identity.

Oz’s 1976 novella “The Hill of Evil Counsel” describes a young Hillel and his European-born parents in a pre-1948 Jerusalem, where Jews sing Russian songs that are “wistful rather than happy.” Though they live in the center of Jerusalem, the Jews still search for the Zion they had longed for while in Europe. “I have been living in Jerusalem for three years,” Hillel’s father writes, “and I continue to yearn for it as though I were still a student in Leipzig. Surely there is a paradox there.”

Twenty years later, in “Panther in the Basement,” Oz made Jerusalem the setting for another identity crisis. A couple in British-controlled Jerusalem grows nostalgic for the Diaspora: “They would sing songs in languages we didn’t know,” notes one of their children, “and they would give us rough translations, so that we, too, would know that once upon a time there had been rivers and meadows, forests and fields, thatched roofs and bells ringing in the mist.”

Again and again, throughout Oz’s work, Jerusalem served as the stage for a collision of utopias, of Diaspora memories struggling against unrealized dreams — something which any visitor to Jerusalem, or any other fabled place, can understand well. And it is this very conflict that brought Oz to find a home — not in any physical place, but in language.

In “A Tale of Love and Darkness,” he finds a “spiritual homeland” in the Hebrew language and in the power of writing. His true homeland, he notices, can in fact only exist in language, because it can only remain ideal as long as it is rendered in words. As a child, he wrote, he wanted to “grow up to be a book.” Books, he notes, “manage to survive” everything; even in the darkest of moments, literature is the “slender lifeline” that keeps hope alive.

Thus Amos Oz found his place — not in the memories of the Diaspora nor in the promise of a Zionist state, not in the streets of Jerusalem nor in Kibbutz Hulda. Oz found himself in the Hebrew language, in his creative searches for a homeland which his family had failed to bring him to, growing up to “express the things that [his family] had been unable to express.”

In a lifetime of writing, Amos Oz found and effectively created a homeland, perceiving an Israel that is defined at once by its memories and by its ideals.