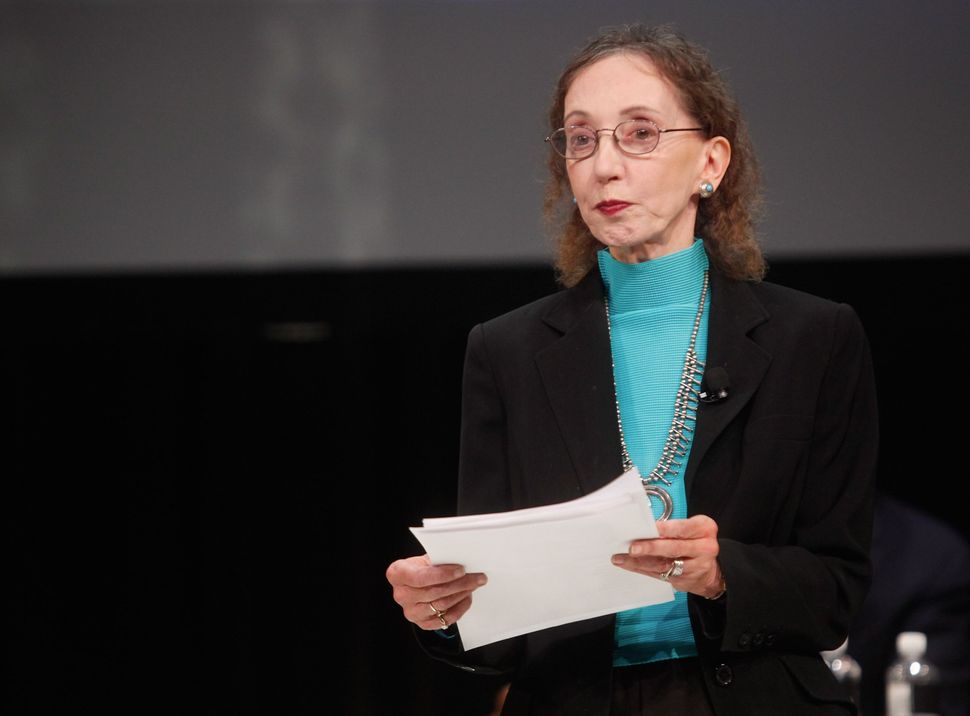 Like her greatest subject, Joyce Carol Oates has an interesting relationship with Judaism.

In her Pulitzer and National Book Award-nominated novel “Blonde,” Oates channeled the inner life of Marilyn Monroe, one of our faith’s most curious converts. Now, the Jewish State is honoring the author for her contribution to literature with the 2019 Jerusalem Prize for the Freedom of the Individual in Society (which, incidentally was awarded to Monroe’s ex-husband Arthur Miller in 2003) this May, The Jerusalem Post reports.

One needn’t be Jewish to receive this honor, indeed, a number of prominent winners – ranging from Karl Ove Knausgard, Don DeLillo and Ian McEwan – aren’t. But in a statement, Oates, who, after Susan Sontag and Simone de Beauvoir, will be the third woman honored, admitted her own Jewish lineage.

“One of the great mysteries in my family life had to do with my father’s mother who was, we discovered after her death, Jewish,” Oates said in a statement. “During her lifetime this was kept secret — for reasons not entirely clear to me, but which I explore in my novel ‘The Gravedigger’s Daughter.’ Obviously, there is an entire dimension of my life which was inaccessible to me and which I might have considered lost, and so a visit to Israel is likely to be profound and life-changing.”

The jury for the biennial prize noted the acute psychological understanding Oates brings to her characters.

“More than anything else, Oates describes and throws light on the tension between the hidden anxieties and desires that permeate the human psyche, and the forces of family, society and culture that give them form — imprisoning them and sometimes releasing them,” said Jerusalem Prize jury members, Dr. Omri Herzog, Prof. Shimon Adaf and Dr. Tamar Hess. “She confronts her heroes — as well as her readers – with the ways in which people deal with internal or external demons, and their struggle defines the boundaries of the human condition.”

Oates, an active Twitter user, has used the platform in the past to question the efficacy of the Boycott Divest and Sanction movement, The Jerusalem Post reports. During 2014’s conflict on the Gaza Strip, Oates tweeted “Thinking of Art Spiegelman’s brilliant ‘Maus’ transposed into Gaza images.” That July she courted controversy when she retweeted an image of bloodied children from Syria that’s caption, erroneously, claimed it was a picture taken in Gaza. Oates has yet to post about the accolade on Twitter but indicated in her statement that she would be present at the opening ceremony of the Jerusalem International Book Forum and the International Writers Festival this summer.

“I am deeply honored to be a recipient of this distinguished international literary award made to writers whose work deals with the freedom of the individual in society,” Oates’ said. “In a world in which individual freedoms are under assault, the autonomy of the individual and the role of art in our lives is of great concern.”