At Museum of Jewish Heritage, Plans For The Largest Exhibit Ever About Auschwitz 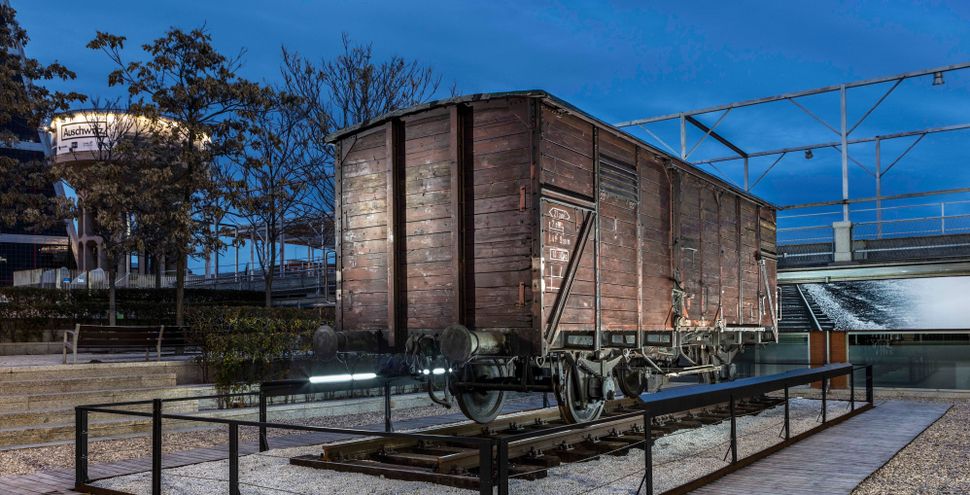 Up to 80 people were crammed in a wagon when they were deported to Auschwitz. Upon their return, the wagons, emptied of human beings, were filled with their possessions. Image by Collection of Musealia. ©Musealia

Dachau. Treblinka. Chelmno. These words are startling in their power to recall the darkest period in Jewish history. But Auschwitz is different.

Auschwitz produced Dr. Mengele and Rudolf Höss, two of the most infamous figures of the Shoah. Auschwitz was where thousands of everyday Germans worked alongside war criminals. At Auschwitz the Nazis established the capital of their genocidal program, orchestrating mass murder on the largest scale ever seen. The death and concentration camp in Oświęcim, Poland remains the constant target of Holocaust deniers looking to trivialize the tragic math: that indelible number of 6 million, roughly 1 million of whom were starved, shot or gassed at Auschwitz alone.

On May 8, the 74th anniversary of Victory in Europe Day, New York’s Museum of Jewish Heritage – A Living Memorial to the Holocaust will open a nine-month exhibition titled “Auschwitz. Not long ago. Not far away.” The 18,000 square foot installation, the largest exhibition dedicated to Auschwitz, is a joint venture between the museum, Auschwitz-Birkenau State Museum and the Spanish traveling exhibit producer Musealia, known for its shows on the Titanic, which developed and premiered the project in Madrid.

Among the over 700 artifacts included in the installation are a German-made Model 2 freight train used to deport Jews to ghettoes and concentration camps and a partial barrack from Auschwitz III-Monowitz, an Auschwitz subcamp, marking the first time major loans from Auschwitz to be used in an exhibition. But the exhibit, curated by Dutch historian Robert Jan van Pelt, does not begin and end at Auschwitz. Rather, it aims to contextualize the conditions that allowed for the free society of the Weimar Republic to fall into the madness of the Nazi regime and its murder of millions including Jews, Romani, homosexuals, political criminals and the intellectually and physically disabled. 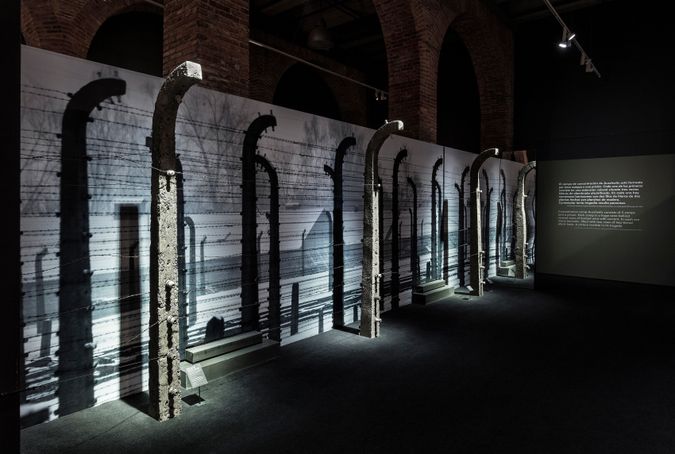 Auschwitz Fence Section
Concrete posts that were once part of the fence of the Auschwitz camp (1940-1945). These posts were covered in barbed and electrified wire, ensuring that no prisoner could escape. Image by Collection of the Auschwitz-Birkenau State Museum. ©Musealia

“The first thing that you see in the exhibit is that that Germany was a western democracy,” Bruce C. Ratner, Chairman of the Board of the Museum of Jewish Heritage told the Forward. Ratner, a philanthropist and real estate developer whose company built the Barclays Center, replaced the previous Chairman, Robert M. Morgenthau, in 2014. “Visitors can see how a democracy can begin to fail, whether it be with the degradation of the press, control of the courts, the police, the army or the use of emergency powers.”

The exhibit begins by demonstrating Hitler’s rise to power, first democratically and later with the Reichstag Fire, which he used to declare a state of emergency and cancel the Weimar Constitution. Ratner hopes visitors to the exhibit will connect the dots between Germany of the 1930s and the far-right swings of many of today’s democracies, the worldwide refugee crises and the genocides that persist in Darfur and Myanmar. These developments, together with what he believes is a global rise of anti-Semitism prompted the museum to import the show from Spain, where Ratner first saw it.

“The exhibit is absolutely critical. We want to concentrate our efforts to teach people about what happened in Eastern Europe,” Ratner said. “Auschwitz of course is in some ways the signifier for so much. It’s the state creating mass, organized, automated murder.”

But the exhibition will not be didactic in drawing parallels to today, Ratner said. Its narrative will takes visitors through the arc of the Holocaust, from the diversity of Jewish life in Germany and Poland before the Nazi seizure of power through to the liberation of the camps using objects like children’s shoes, suitcases, artwork, boarding passes for the MS St. Louis, a gas mask used by the SS and the personal desk of Auschwitz commandant Rudolf Höss and a part of the camp’s electrified fence on which many inmates committed suicide. Video testimony from survivors and over 100 artifacts from the museum’s collection will guide the narrative and personalize the experience to demonstrate that it was ordinary people who were killed and who did much of the killing. 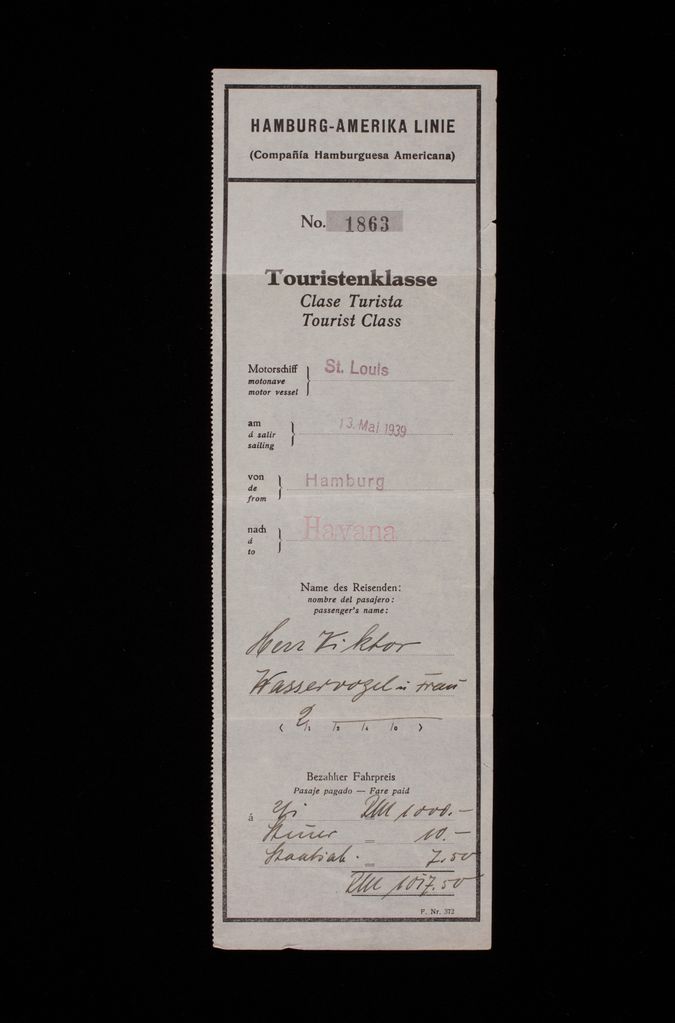 Paul Salmon arranged passage on the St. Louis for his wife Erna and their children. The ship sailed from Hamburg to Cuba—where it was denied permission to land. Image by Gift of Egon J. Salmon/Museum of Jewish Heritage NY

“It’s like reading a story but with real objects, most of which have not been seen by the public before,” Ratner said. “It’s not dissimilar to being at the site of Auschwitz ”

The New York Times reports that the museum expects to spend $8.5 million between the installation of the exhibition and other scheduled building improvements. The Museum of Jewish Heritage has raised its non-member admission price from $12 to $16 for the exhibition and will pay a fee to the Auschwitz-Birkenau State Museum for its help in producing the display. When the exhibition is installed, it will occupy three floors of the Museum of Jewish Heritage building in Battery Park. The museum will make space by removing their permanent collection, a move that Ratner said was in the works already.

“Our exhibit is 20 years old so we had planned to update it and change it substantially,” Ratner said, adding that the staff and board are looking for ways to incorporate video and interactive technology as well as integrate the latest scholarship and findings into the core collection. The updated collection, which will be developed over the next year, is scheduled to premiere at the end of the Auschwitz exhibition’s run in January 2020.

In Madrid, the exhibition was extended twice and was seen by 600,000 visitors. While much of the installation will remain the same for its stay in New York, the programmers for the Museum of Jewish Heritage’s have included another part of the Holocaust narrative.

“What we added was this notion of spiritual resistance,” Ratner said. “Anything from continuing to wear a tallis underneath your clothing, remembering the holidays, even going to what you know is certain death with dignity and prayers on your lips. It’s very important to talk about because some people think Jews didn’t resist.” 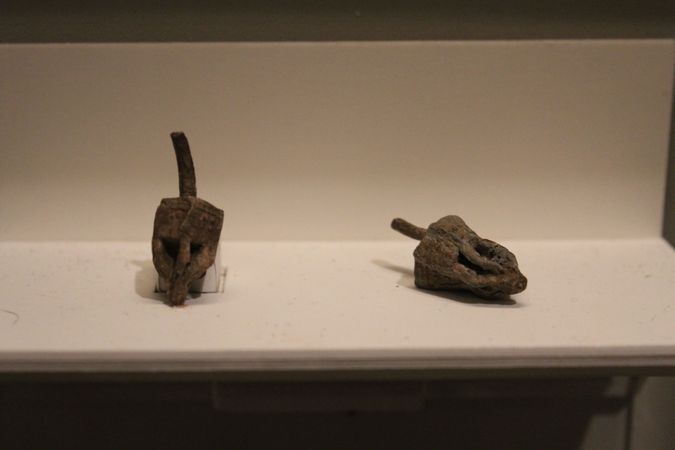 Ratner believes the Auschwitz exhibition marks a new phase for the museum, which opened in 1997 and, as The Times reports, has been suffering from underwhelming attendance. The institution’s identity as a Holocaust museum is confusing to the public, Ratner noted, because its name emphasizes “Jewish Heritage” and because it has hosted exhibits on subjects as diffuse as mah jongg, the Leo Frank trial and midcentury modernism in Jewish homes.

“I feel like the times require a greater emphasis on anti-Semitism and genocide as represented by the Holocaust,” Ratner said, citing Charlottesville and the Tree of Life Shooting in Pittsburgh. “Our goal is not just to have successful exhibits but to do something that confronts the issues that people care a lot about today: hate, genocide, social justice. Our exhibits and our programming will emphasize that even more.”

Correction: A previous version of this article misstated the old non-member admission price.

At Museum of Jewish Heritage, Plans For The Largest Exhibit Ever About Auschwitz